DEATH OF THE SNOW QUEEN adventure

Author’s Notes: as you can obviously see, the story is in part inspired by Disney’s ubiquitous ice adventure “Frozen”… except that IT’S NOT. Of course I have seen both Frozen movies, but for this adventure I went back directly to the source material. 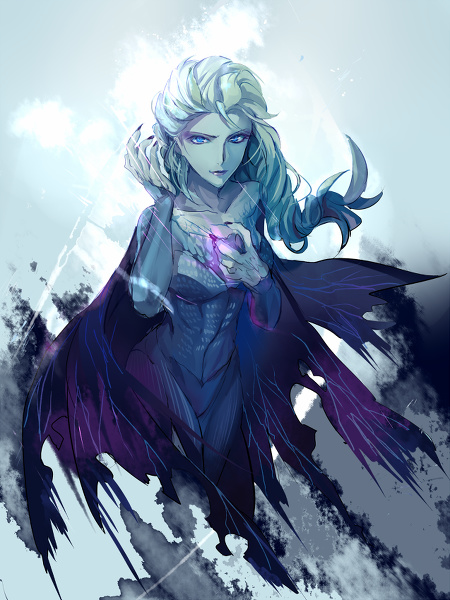 This is another one of the one-pagers. I’m adding this here 'cause it’s almost Christmas and I’m planning an ice-themed adventure for tomorrow (tonight we’ll play Blood & Snow - Journey to the Lands of Summer).

So, I’m leaving the Moments for this adventure here and as always, any feedback or suggestions are welcome. For this one I’ll make the Players create adventurers using the rules of Alfheim. Rewards will come VERY fast (maybe after each scene).

Five years ago the dreaded Snow Queen rose to power. She and her army of snow monsters have been killing or banishing all opposition within the Kingdom, consolidating her power with blood. There are very few people left who can fight. On the brink of total defeat, the Resistance leaders finally abandon what morals they had left, calling to your band of adventurers with a single request: Kill the Snow Queen!

SCENE 1
The Heroes arrive at the Crystal Steps , a very long ice stairway created by the Queen that connect her isolated tower to the Kingdom, guarded by the dreaded Ice Trolls. Defeat or sneak past them. Simple and direct.
Suggested Target: 10-12
Suggested Timer: The Trolls will break the steps every 1D4 Rounds, making it harder for the Heroes to continue.
Suggested Treat: for each ice troll defeated grant one Loot (Ancient - the trolls were created from the corpses of powerful warriors from the past).

ICE TROLLS: 2 HEARTS, +4 STR, +0 All OTHERS; Punch for Weapon Effort damage, Throw Ice Stone for ranged Magic Effort damage (dodge for half damage). Immune to cold. There is one ice troll per two heroes, round down.

SCENE 2
Inside the Queen’s Castle the Heroes ding the Hall of Mirrors and the Girl in the Ice . Princess Ravenna was trying to save her fiancé, Kay, from the Snow Queen. She was defeated and encased in eternal ice. Bring light from the sun through the mirrors to free her and find out what she knows about the Ice Labyrinth. This is a puzzle room where the Heroes need to play with the positioning of mirrors to reveal the exit and/or to release the prisoner (1 Heart of INT Effort to complete). At the first Round, immediately when the Heroes start solving the puzzle, a Swarm (Core 2E, p. 125) of ice crows attacks.
Suggested Target: 12
Suggested Timer: every 1D4 Rounds thereafter the Swarm increases, gaining 1 Heart.
Suggested Treat: Milestone, plus one piece of Epic Loot as a gift from the Girl in the Ice if she’s saved.

SCENE 3 (this is a connecting/roleplaying/setback scene that throws the heroes into the last part of the adventure)
Now free (we hope), Princess Ravenna guides the Heroes through the Frozen Labyrinth , but they are stopped by the dreaded Ymir , a towering dark knight. When the combat is going on the Heroes way, they are betrayed by Ravenna (maybe she puts herself in danger on purpose, and when the Heroes try to help she gives Ymir the opening necessary for him to automatically defeat them). It’s revealed Ymir is actually Kay, who is Ravenna’s lover and was the Snow Queen’s first victim. The Heroes are captured and put into the dungeon. Ravenna says she’s sorry, but she couldn’t allow them to kill Kay. She tells them her story…
Suggested Target: 15
Suggested Timer: -
Suggested Treat: -

SCENE 4
Ravenna reveals that she and Kay fought the Snow Queen together two years ago. Despite her powers, the Queen was overpowered; during the fight she broke her Magic Mirror and two shards pierced Kay’s left eye and heart, turning him evil and putting him under the Snow Queen’s power. Ravenna offers free the Heroes if they promise to help her save Kay and defeat the Queen, or they can try whatever they prefer. Eventually, the Heroes are brought before the Queen where they fight Ymir again, this time to the end.
Suggested Target: 15
Suggested Timer: Every 1D4 Turns, icy wind and stinging snow swirls around the battlefield, making all Checks Hard on the next turn for all creatures that aren’t immune to cold damage. Additionally, two ice trolls appear with the wind.
Suggested Treat: Milestone, 3 pieces of Epic Loot.

SCENE 5
With Kay/Ymir defeated, the Snow Queen herself appears to destroy him. Without interference, Ravenna tries to protect him and is killed, but her death melts the shards from Kay’s eyes and heart; he’s too weak now, but manages to tell the Heroes about the powers of the shards. The Snow Queen is absurdly powerful (fighting the Snow Queen in her palace is a base Target 18). However, the Heroes can use the shards to defeat her instantly, not because of some mortal vulnerability, but because these things are just that powerful . If the Heroes are victorious they can help Kay (or, if he’s beyond saving, he asks to be buried next to Ravenna), the weather improves, the lives of the people return to normal, the Kingdom is saved… for now.
Suggested Target: 18
Suggested Timer: Every 1D4 Turns, icy wind and stinging snow swirls around the battlefield, empowering the Snow Queen and allowing her to immediately freeze and destroy 1D4 random Loot from the PCs.
Suggested Treat: Heroes of the Kingdom, 2 pieces of Magic Loot; plus one Tier 3 Path Reward (check ICRPG ME or ICRPG Worlds) for each character.

THE SNOW QUEEN: 3 HEARTS, ROLLS: +6 STATS, +4 MAGIC EFFECTS; 2 ACTIONS PER TURN. Can cast any spell the GM wants from Core or Magic (always cold-themed); doesn’t need to pay the cost to cast Power I or II spells, pays cost for Power III or IV spells as if they were Power I or II.

I have two more of these in the making:

Anyway that’s it for today. Hope you guys find something useful from these ideas.