This is a work in progress, but I’ve been chewing on an idea that was brought up in the Discord Server: Wizard Death Squad.

Instead of Viking Immortals and Humans, you have Wizards and Warriors. There are only 10 Wizards (think the 5 Wizards in Lord of the Rings) and they only get 3 lives. They’re the IMMORTALS of this hack. Other details for the setting include:

My hope would be to have each type have its own flavor. Wizards aren’t wearing much physical armor but they have these Wards that take hits and act like armor but you might have a fire ward or an ice ward that has some effect as it protects you (Still only three hits though, like in VDS). Then you’ve got Warriors using metal weapons and armor to protect themselves as they get into the thick of things, but yeah. Mostly just a reskinning of VDS, trying to keep as much of the system intact using the Core Hack.

Oh and I hacked together a quick concept of the cover if I ever get around to flushing it out completely: 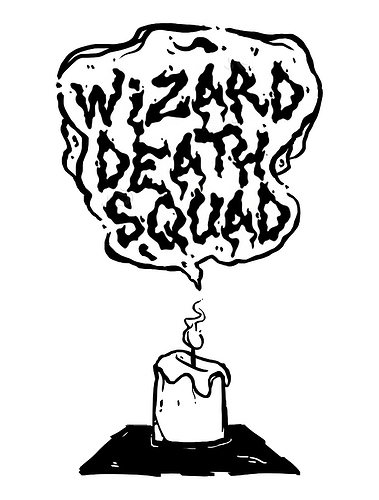 Man this is so cool. Lots of potential for a Points of Light setting. The Wizards are the last bastions against a powerful enemy consuming kingdoms squabbling for scraps.

This is so freaking cool!

#1. Please explain Keep Fighting… I think I get it, just need a little more clarification.
#2 _Master of Fate _ … there are no words to explain how much I love this freakin’ rule.
#3 If wizards cannot use metal, can they use armor? I assume there are armors made from other materials, just thought I would clarify. Wards… yes… and magic spells that can do the same? I think so… what are your thoughts? Spell Shields??
#4 do you have any variants on using the PUSH mechanic on spells? I have a quick bullet list I am compiling… nothing solid yet.

So if you take this Special Skill as a Warrior, you are allowed a single (1) hit with zero armor, which would otherwise kill you. But that single hit only resets when your RESOLVE resets which is like when you rest in safety for an hour or so (according to VDS). Just a little, tiny buffer to let Warriors keep fighting when all of their armor is gone.

Thanks! I really liked the idea of it. I’ve seen it a lot in board games as an easy way of dice mitigation which felt right for wizards, without going overboard

Wizards would be able to use armor, it just wouldn’t be metal. My thought would be that metal armor would have more consistent effects to rebuff attacks or ignore damage etc… while basic armor, cloth and the like, wouldn’t really have those or any effects. But there would be Magic items out there that could grant Magic Armor or Wards. So like a Wizard finds a ring and when they were it, it counts as a piece of armor for wizards. But this is a ring of fire, so instead of rebuffing hits like the metal armor, it would blast back and damage the gear of whatever hit it. At least until it’s three hits were used up and the ring would shatter and fall off the wizard’s finger.

I didn’t have anything specific in mind. I would keep it as close to what is mentioned in VDS. Some kind of amplification that makes sense and expends one of the items three hits. Since spells are all items, this made sense to me and kept things easy.

Are you going with destroying the spell if pushed past its 3 HIT limit? or just cannot cast until rested? … as I write this I think the answer would be more “World” kind of thing.

My original thought is that the spell is destroyed once it’s pushed or damaged past its 3 HIT limit. Makes the combination of spells for each wizard much more fluid because it’s gear/item based. BUT one variation I had from VDS was that when a Wizard gains a RUNE, those Runes would describe rune spells they could acquire permanently.

Are you working on a list of wizard skills - stuff like “skeletons”. One such skill could be “wards” which would serve a little like the “repair” skill, but for wizards without armor. I think the potential for magical skills is wide open.

Yeah I’m planning on having about 30-40 skills, sort of like in VDS. But most of the spells and things would come from items rather than skills.

But this is a ring of fire, so instead of rebuffing hits like the metal armor, it would blast back and damage the gear of whatever hit it.

What if Elemental armor (Ring of Fire, Frozen Breast plate, etc…) Have elemental weaknesses as well. So like A Fire spell ignores any special properties of the Frozen Breast plate (Or just does extra damage to that opposing item). Keep it simple of course, a rock paper scissors style system. And of course enemies would have these same potential armor issues. AND you could flip it on it’s head; I have the Frozen Breast Plate so Fire Spells must be pushed to harm me.

I like this idea. It will work well in my Dark Sun Death Squad game.

On the wizard armour topic, I’m reading a book where the wizards cast what they call a “wizards web”.
These act as bits of bespoke armour or spell protection against individual effects.
That sounds like it might fit her. Examples you can cast a wizards Web to hide a piece of equipment or hinder/block an action of some sort against you.
Like that idea and it might be of inspiration to to use here.
Great idea overall, a nest of creation in this forum.