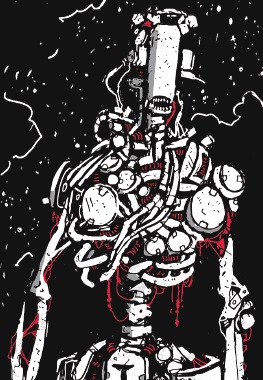 Playing some VDS there were some rules wrinkles that came up. I came up with rulings at the time that worked in the moment and kept things going, but they were kind of junk and not something I’d want to adopt as permanent rules. Here’s the problems I had, let me know if there’s any solutions, official or otherwise that you guys have for me. Oh and thanks ahead of time!

Problem one: Armor rules slowing combat to a crawl!
You’d think everyone having only one hit point and a few scraps of armor to their name that combat would be blazing fast and furious but in play it lagged out badly, and here’s why: In other types of games you have a minor badguy and he might have 8 hit points. You hit him one good hit with a beefy guy and a big weapon and he’s out, or two or three hits if you roll badly, are a littler guy, have a smaller weapon or whatnot. In VDS barring some kind of special ability you’re always going to do one damage and the badguy, unless they’re completely unarmored, are going to be able to soak at least FOUR hits (3 armor + killshot). There is nothing more sloggy than having a bunch of borgs (so I originally mention borgs in this example but it’s pointed out to me that borgs are actually armor 0 like I wanted them to be–so let’s say regular armor 1 human marauders instead) taking hit after hit from some giant 10’ viking with a gravity hammer and just happily going toe to toe with him. I’m not sure I love how that feels, especially not with marauders in numbers. Maybe for the marauder boss, but not for his rank and file thugs.

Not sure how to talk about this much more deeply without getting mathy about it and causing people’s eyes to cross, but in the most basic terms: assume an average RPG character can do about 6 damage in a round of combat. That means the equivalent badguy in VDS would have 6 hp with no armor, the equivalent of 24 hp with 1 armor, 42 hp with 2 armor, 60 with 3 armor…and there’s no easy way to ever NOT just do the bog standard 6/round. That makes the heroes feel less than epic. Which is just a big ol’ bummer if you’re going for a game that feels over the top Metal.

Which the answer might just be to cut badguy armor down to 0 for most guys and have 1-2 armor make you basically some flavor of boss monster? (So from looking at the monster lists again I think this is just how the game is intended to be played–mobs of single hit badguys with champion units having an armor piece or two, and the big guys often with special rules that make them harder to hit or damage–and/or intentionally crazy levels of armor)

Problem two: Some kind of mass combat rules needed!
I love the idea of Immortals wading into a crowd of borgs who are just kind of blasting bolts at them badly, in sort of their general direction, but I’d like it to be more of a mechanic than: they shoot at you ineffectually (no diceroll), but more of a mechanic than having to roll to hit rolls for a dozen individual borgs each round–something that works more like a hazard that has a harder DC each round the more borgs are firing at you. Sort of like volley arrow fire–no particular target, you’re just in danger if you’re not behind cover of catching one.

Maybe roll a difficulty based on the size crowd of enemies/density of fire in d6s and have the players roll to save, if they get hit maybe roll a d6 to see how many shots hit? That’s kind of what I came up with on the fly but not sure how I like it… (After hashing it out a bit, I think this is going to be the final form of my mass combat rules patch: a group of enemies is akin to a hazard with dice equal to how big/dangerous the group of enemies is but often between 2-4d6 vs the PCs Speed. If they fail, I roll a d6 for how many shots/attacks/whatever hit them–which seems like plenty unless it’s an enemy that’s just attacking like crazy, chainguns or the like, in which case maybe 2d6 hits)

I feel like this should fix it. I’ll take it for a spin next week hopefully and let folks know!

I just ruled that basic borgs have no armor and were one hit kills.

As for pack tactics, there’s a lot of theory around this. There’s some posts on this forum around packs, mobs, swarms, etc. I think your approach sounds find: roll a die for the number of enemies that hit you. If you’re in thick with a swarm of borgs, maybe roll a d10 or d12 - really increase the risk.

Oh well I just flat misread that in the heat of the action then! Congrats to me I guess on panickedly re-inventing the original rule in the midst of my flailing.

I guess looking back at the kludge rule I came up with for mass combat, a lot of my concerns with it iron out pretty well. You can gauge up the threat the same as any threat by adding additional d6s (assuming the group of combatants grows significantly) and potentially add more d6s of hits to how many you take on a fail to scale up the threat (though taking up to 12 hits each turn feels like a tool I’d only pull out if things get truly crazy). I think my initial problem on the day was trying to have a granular solution that scaled up by head-counting individual borgs and trying to tie it to their individual to-hit dice. Too much detail. Abstraction is better.

Big group of robots all firing vaguely in your direction? Moderate threat: 4d6. Done. Smaller or bigger horde? Add or subtract a d6, just like any difficulty roll. Number of hits you take from the horde starts at 1d6, but if the fire is truly withering–from chainguns or the like, just add another d6.