I have been playing with a group who switched to ICRPG exclusively in the last year (because it’s amazing! It totally changed the dynamic and all of us are way more engaged). Most recently we played a great campaign based on 90’s teens in Tales from the Loop and are currently doing Shadowrun. Since we are playing from home we switched to Discord for our games which has been great. Using the Sidekick bot has been helpful as well so we can all enjoy seeing the same rolls. During this transition I was experimenting with different fillable PDF character sheets. I was blown away by NZV’s ICRPG Character Sheet - Form Fillable by Jason_Scranton / Michael Moch (nonzer0value).

I got tired of filling in PDF’s, saving them, accidently overwriting data during a game, etc. So I decided to make a character sheet app!

This app works but is alpha quality. I didn’t want to spend a few hundred bucks on buying code certificates so this app is unsigned which may turn people off (it’s based on electron). Hopefully this makes someone happy. 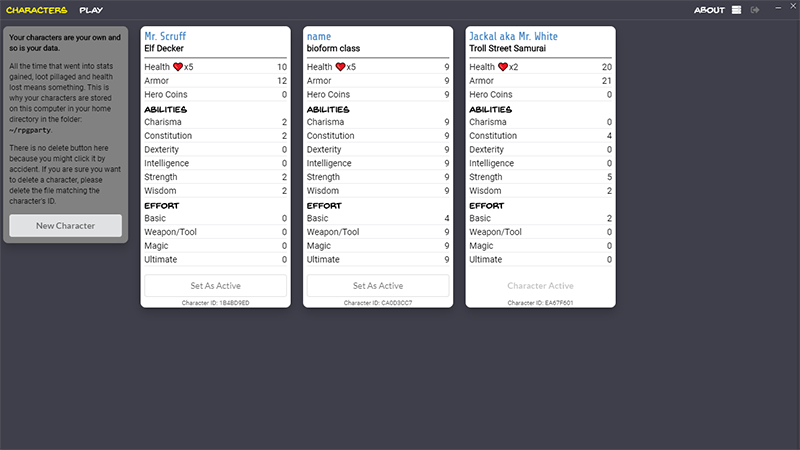 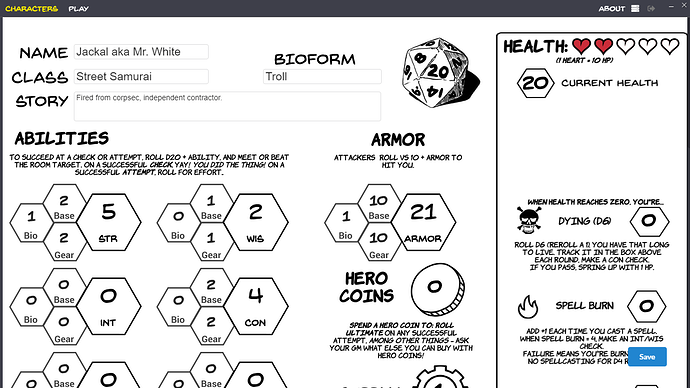 Great work and welcome to the shield wall! Take a hero coin for your hard work sir!

Looks great
Feedback about the site

Alas, since i can’t download the mac version i can’t try it. but it does look pretty nice in the preview. Would be spectacular if you could open source this so that folks could make variants to support their ICRPG variants

Since you’ve decided to throw out “Bio-Forms” in favor of “Race” maybe you could consider throwing out “Race” in favor of “Ancestry” (what Pathfinder uses) or something similar because Race is a very loaded term that is rarely used to indicate species (E.g. “the human race”) instead it makes people think about all the racism related stuff.

Thank you so much for the feedback @masukomi! The download for mac was indeed busted. I fixed the link and you may have to refresh the page to get the link to work. I hope you can try it.

Also totally missed the lack of Bioform. I had used the character sheet (from NZV’s above) as a template and whoops… I appreciate the callout

This is super impressive and I really like how easy it is to use. Well done!

As I have been playing around with it, I was wondering how do you log out of a server?

UPDATE: Never mind, haha. I figured it out. All I had to do was close out of the application and it was all clear. Just got to think through the problem

This looks neat. I may be missing it, or just too soon in the dev process, but I can’t figure out how to re-open a character and edit, like if I had just got some phat l00t. Help me see the light?

@Lon You can click on the “Characters” navigation. Sorry it isn’t super intuitive!

I’ll try again at home in a bit, but that’s exactly what is was clicking (Mac version) and it didn’t reopen the character sheet.

Aha, figured it out. I had saved a couple entirely blank character sheets just to see how things worked with Discord. Turns out, you have to give a character a name if you want there to be a link later so you can go back in and edit/update.

McAfee Tells me there is a virus in your program.

I didn’t want to spend a few hundred bucks on buying code certificates so this app is unsigned which may turn people off (it’s based on electron). Hopefully this makes someone happy.

for the non-geeky that’s the sha-256 hash, and that’s useful because you can take the .exe file, hash it (give it to something that runs the sha256 algorithm) and it should produce the same string. I have no idea how to do this on Windows. If it does it proves that the version of the executable you have is the same as the one that was passed to VirusTotal and thus the results you see on the site are actually applicable.

For those seeing the warning on VirusTotal if you click in you’ll see it’s just complaining that it’s not signed. Signing doesn’t make you any more secure, it just indicates that the software was generated someone who paid money to stick their name on a list. Thus IF it contained a virus… they’d have a name on a list they could look at and… not really do much.