I have made some reference cards for my Warp Shell game so that the players can see the exact wording of their abilities if needed. I have made similar ones for another game / setting and found those players appreciated them. There I concentrated on equipment cards, but here I decided to be more complete: I have life forms with starting ability and special ability, character type, starting loot, mastery, basic targets, milestone paths (only description), and of course hero coins. (The last two also feature freehand drawings.) I still plan to do basic loot, but with drawings, so that will take even longer.

I know these (except the hero coins) are not index card stock, but I recycle old binder-dividers and empty pages of to-be-retired notebooks into these playing-card sizes (and also, they were already cut out). I also like the concept of characters a card deck (although weirdly I don’t play any card-collecting games).

What do you think? Do any of you use something similar? There are of course the official monster cards too, I plan on making prints of those too for my table, but those are more obviously useful. 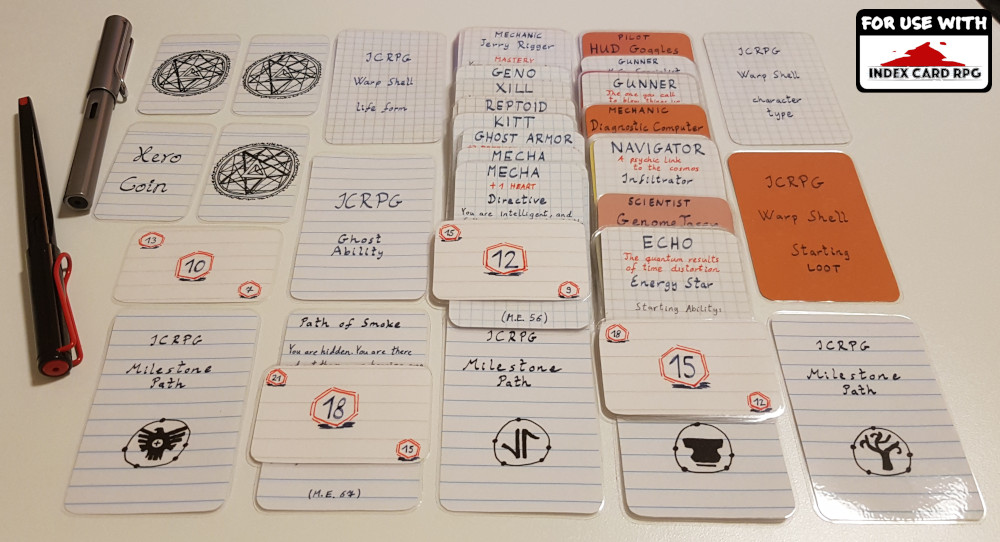 (This is not a digital asset, but just to be sure I included the badge. I also hid the content beyond a demonstration, to not include published work.)

it looks great i am still trying to get my footing in ICRPG but it defiantly inspires me to have grander plans.

Looks good, I printed a word doc as a quick reference guide of my player’s abilities.

There is also this: Quick Reference Guide

I can see players getting excited to get new cards with new abilities on them. Very cool table resources!

That is also a good way, would be compact and a nice overview. But if I want it to be re-usable, durable and extendable, it needs to be in separate parts. I like both ways: as a player I would probably create and use the former for myself, but as a GM (especially with new players) I can’t expect that, so I’m opting to do it for them. Even if they wouldn’t use it / find it useful, I like crafting these, so there’s no way to lose:)

Game on! And have fun.

i think is great for the players that can see, touch with hands and remember what they gain and have. The GM in this way is helped remembering ideas.