edit I realized some of my possible players may lurk around here. Hence I add this Glyph to change the preview Image of the Thread to avoid spoiling them if it isn’t too late already. Phil, Brian and whoever else from the Monday or Tuesday group sneaks around here please stay out. Thanks! 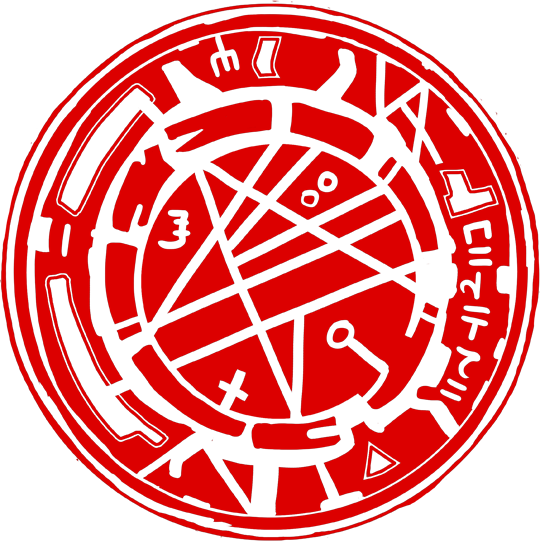 Usually when I prep a campaign I go full tilt overboard online support. Uber detailed maps. tons of macros you name it. When I thought about running a fantasy campaign again I was stumped for the longest time going down the same route I usually do. “I need to create an awesome starter village with lots of interesting NPC, locales and adventure sites around it”. Then I discovered Runehammer on youtube.

I decided to toss all that and go as much as I feel comfortable with the ICRPG style. No maps at all I just can’t do and I can’t create maps on the fly like Hankerin does so I still must do maps beforehand or use already existing ones. I will augment them with cards though. And since I never have done so before (honest) I will do the “you are all prisoners” start this time! ANd have them stumble around the underdark trying to find a way home or whatever else they decide to do. First session I have 2 maps down and work on the third.

The Prison. Pretty much an exact copy of one of the “3 Encounters to start your campaign” just with two ways out. Plan to run very close to the video.

The cave leads to this. The cloud is not there in the beginning but will be triggered by one of the characters falling or touching a shroom. Some DEX checks for jumping, STR Checks to climb around, CON Checks to resist the spores etc. Timer: 1) 1d4 Earthquake. Makes the Jumps more difficult an characters can fall into the shrooms. 2) 1d4 until shroom explodes once triggered. Treat: Some treasure with the skeleton and the Chrystals. No idea what they do yet. Threat: The Shrooms as well as a wounded cave creature that the green ichor points to. 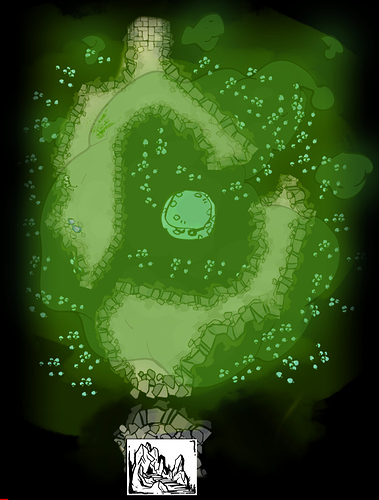 Third map would be the area behind the Iron Bars. I think it should be a courtyard and a sneaking and guard bypassing challenge but haven’t created that yet.

Finally I need a fourth map that the players reach by either going through 2 or 3. No idea what that’s going to be, probably will let the cards help me out.

And the pure battlemaps in 72 DPI for Roll20 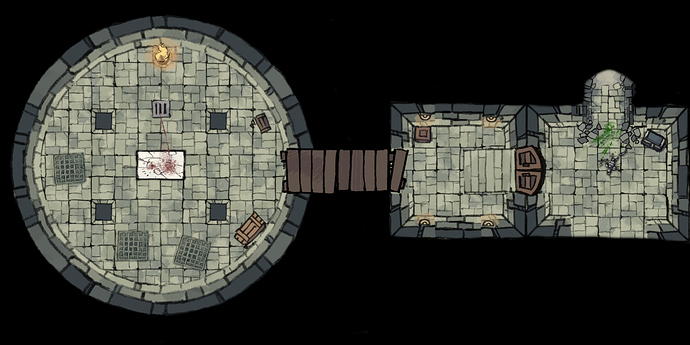 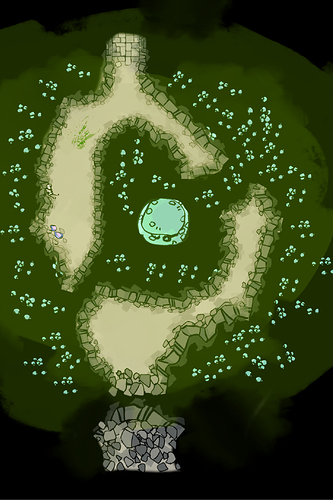 These look awesome! I like how your are using the cards to augment the maps. Nice work here!

Killer man! Taking things down to discrete spaces changed my life. And Prisoners of Molok is a favorite around here. To this day, the Three Encounters to Start Your Campaign is my favorite video.

Thank you, I try to do more with the cards then this in the future. I think they can give a perspective that a simple top down map can’t give. And I just love the look of the cards mixed in with the tokens and maps.

Thanks, it is a great video and it is a great campaign starter as it can lead everywhere. And that it’s very contained and you don’t have to worry about special things is pretty great to ease everyone into the game.

Also, I have to give a shoutout to Two Minute Tabletop. Ross’s maps are great and so easy to work with in Roll20.

Indeed, without his work those maps wouldn’t exist.

Thanks for sharing the maps here! They look great!

You’ve really inspired me with this post. I’ve never thought to merge the b&w index card assets with the roll20 maps I typically use. But duh, why not? It works in a cool way!

I saw Hankerin do it in one of his streamed games and I thought it was in interesting effect as it immediately draws the attention to the cards. They just look cool. Plus it makes the VTT look more like an actual table.

Next room! If the players go right in the prison they will end up in here. They are still low on gear so some spread around. 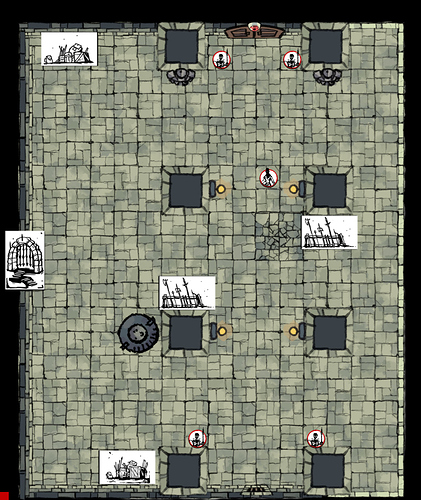 And the Battle map: 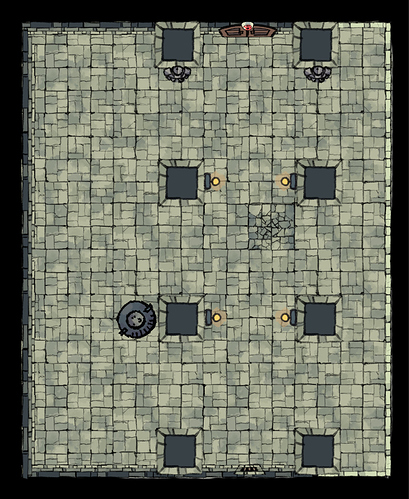 This looks fantastic, your players are going to have a blast!

The prison room would be perfect as Ultimate Dungeon Terrain to print.

Update on the last room. After some pondering I found the room lacking. It needed more interesting gameplay I felt. So I changed it around some. Added a room in the bottom, basically an alchemy lab where a Crystal Mage resides. Said Mage will mistake the PCs for new assistants for some RP fun. If they cna bluff their way through they don’t need to fight him at all. The room can be entered through a door or a window on the balcony. An earthquake might even destroy part of the wall but this will also cause the lab to be filled with noxious fumes. As that room contains the only exit that needs to be pried open with 2 Hearts of effort this could be a problem. The balcony on the right side had some rocky outcropping added so players can hide out there from the Patrol or sneak around to the window and stay out of sight from the eye. Also added a lot more floor that will be crumbling once the timer is up.

Switched the location of the Eye as well and added a Cone of Visibility that I can swivel around. Also moved some other stuff around. Much happier with the room now. I like it so much I will probably update the Prison map to “force” players to go here. 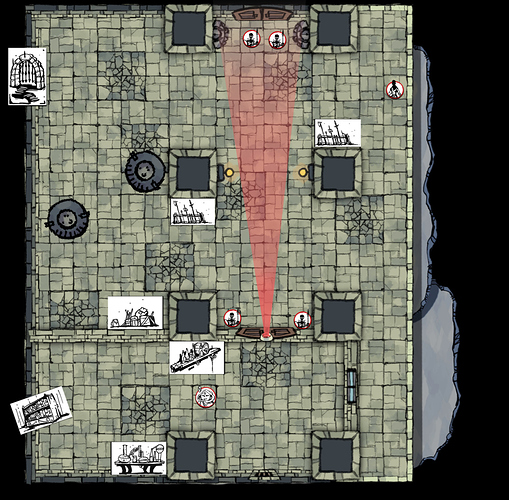 And the Battle Map 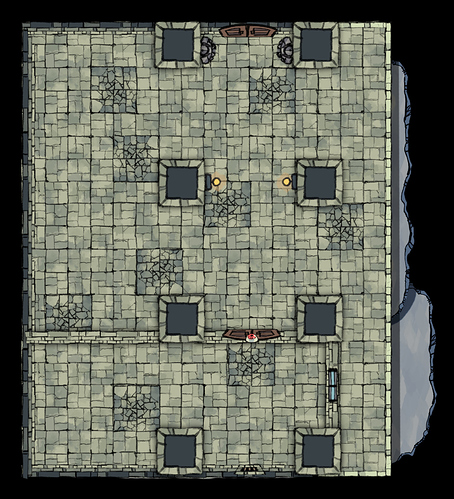 Working on some Background. I want to use Tags and may have gone a bit overboard with the Bio Forms but it was a fun exercise!

Started to add Tokens for the Bio Forms. Tracing stuff is fun. 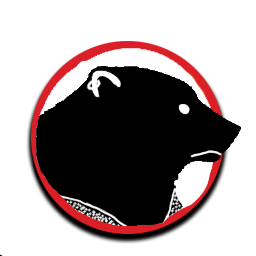 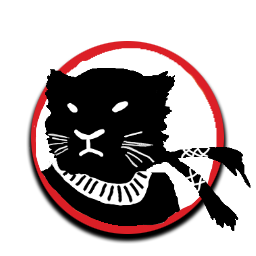 We are going to have our first session on wednesday. Still working out some macro stuff but in the meantime I made a new timer dice token, just for fun. 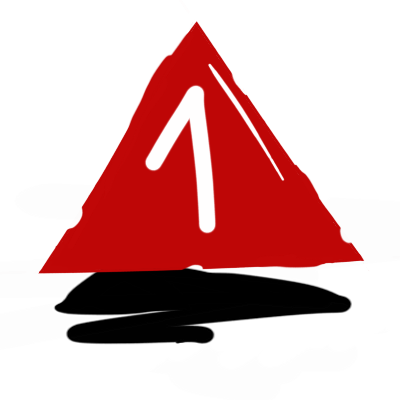 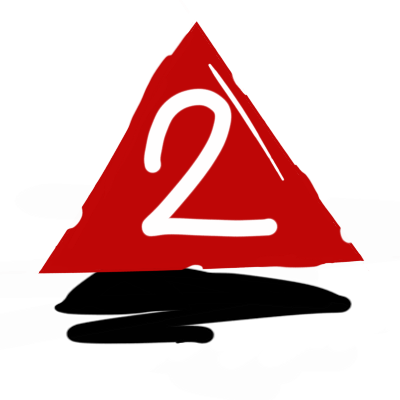 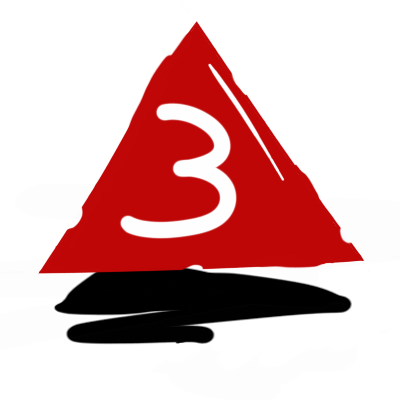 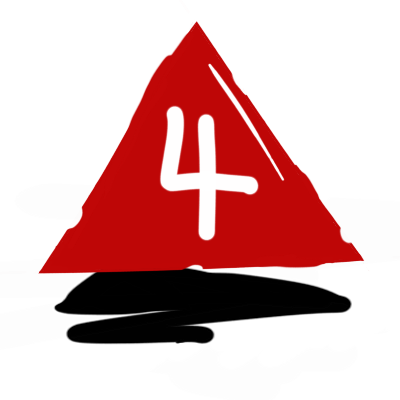