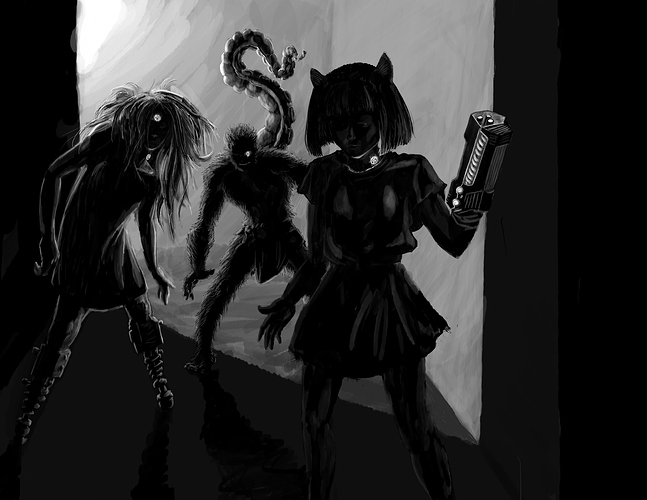 I’m running the Molok Madness dungeon for 2 players and we had 3 other PCs join us for a couple of games. I’m planning on having the characters hang around as NPCs now, hopefully using @GmGrizzly’s NPCs as LOOT system.

These characters were augmented by my Red Mage Augment Table (link below). One has a Jump Kit, allowing them to move FAR and act. The other has a “Vicious Tentacle” which will randomly counterattack anyone NEAR, the third has a blaster which does GUN EFFORT.

I’m still brainstorming with the players about what the active and passive effects of these NPCs will be. So far they’ve survived one encounter, we’ll see how far they can make it.

[The_Mapless_Maze] I’m running the Molok Madness campaign for a couple of players. After a TPK in the Machines of Molok room, I needed a way to drop them right back into the action. I decided to use the timer mechanic from the Marauder room. So every round, a ghoul drops into the room from one of 4 chutes. I had the players wake up on an assembly line where robotic arms powered by the will of the Red Mage ripped them apart and welded them back together. (I cleared it with my players beforehan…