I posted a pic of a recent VTT game that I got a few questions about, so I thought I’d share my quick workings on it. It was the result of a lunch break at work, so wherever there’s an empty spot or something that can use more work, feel free to workshop it.

Also, here’s a terrible graphic to help me explain some stuff. This was inspired by JRPGs, Darkest Dungeon, Battle Chasers Night War, and the Dark Souls board game. 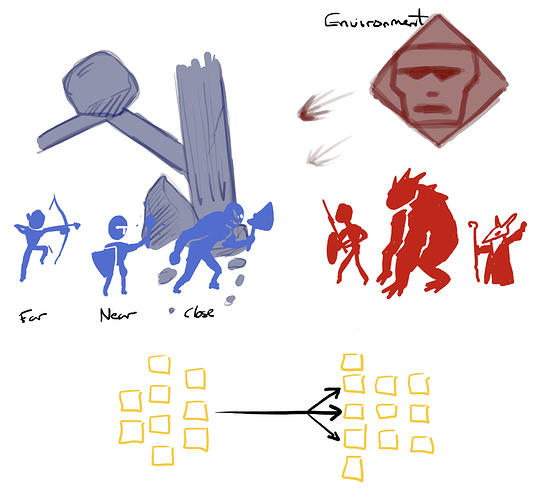 Premise: All people involved in combat line up similar to turn based JRPGs to simplify movement. Design combat with character density as opposed to spatial density.

Rows and Attacking: The middle of the map is the “eye of the storm” so the enemy ranks abide by the same Close/Near/Far setup as the players. You cannot target a creature that is behind another creature, they are being protected. You may only attack a creature that is directly across from your or directly diagonal to you. This is simple, so if you want to make it a little deeper try these things:

Some attacks/effects may attack a lane or a row, like a grenade attacking a whole row or a piercing attack getting a lane. Spell targets, wild weapons, special abilities, there’s too much to even try o put in here: get creative, get nuts!

Movement: You can move 1 space on your turn, moving laterally or changing rows. If you sac your attacking/misc action you can move 2 spaces. If you move into a space occupied by another player you switch places with them (since you’re moving relative to the eye of the storm). You can use this to help move your team mates into better positions by relatively shifting the battlefield.

Using Items: To use an item on a party member you need to be in the same row. Use your own judgement because that’s a fast and loose rule aimed more at dispensing potions, helping a friend up, or something similar. Throwing a Molotov cocktail? Probably don’t want to be on the same row when that goes off.

Designing your Environments: This is a really strong element of this set up, probably my favorite part. You can quickly and easily give your encounters a lot of character by putting in the details of your environment according to rows, background, and of course the all-powerful 3 T’s! There’s an infinite amount of ways to get creative here, so let’s just get through a couple examples:

Well, there’s a quick primer on it. I’ve probably left out some mission critical info, but I’m just writing stuff down as I remember it, haha. There’s a lot more to it, and a lot more to discover, but I’ve had a blast messing with it. Bonus is it’s pretty familiar to most players so it’s easy to relate to them as a game to be played than a simulation to manipulate. Got cool ideas? Did this spark your imagination? Drop a comment so we can learn from your wisdom!

Here are a few more pics of set ups from our light play testing of it. 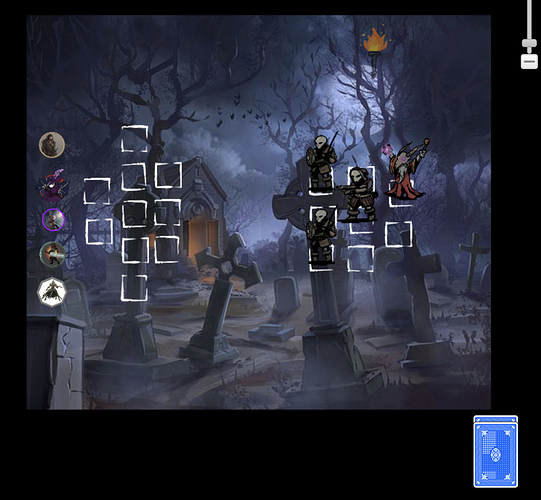 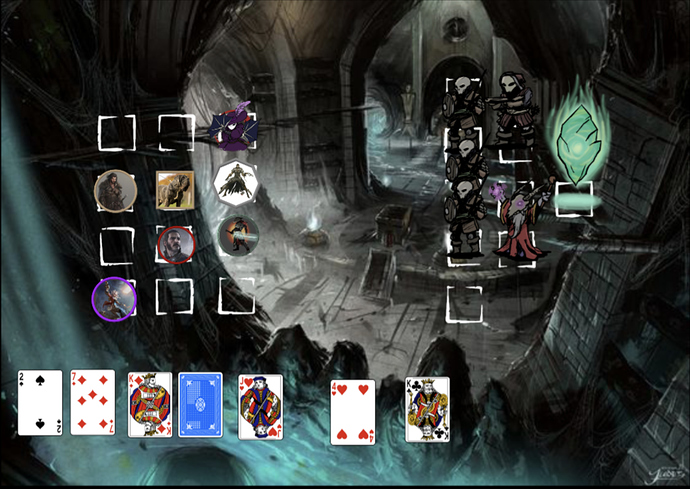 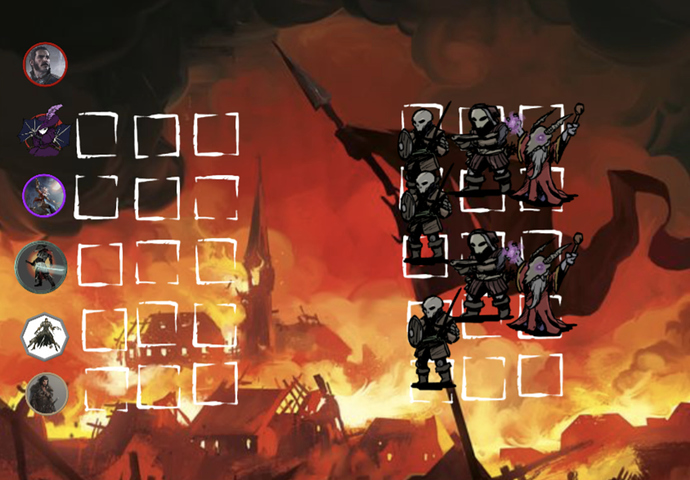 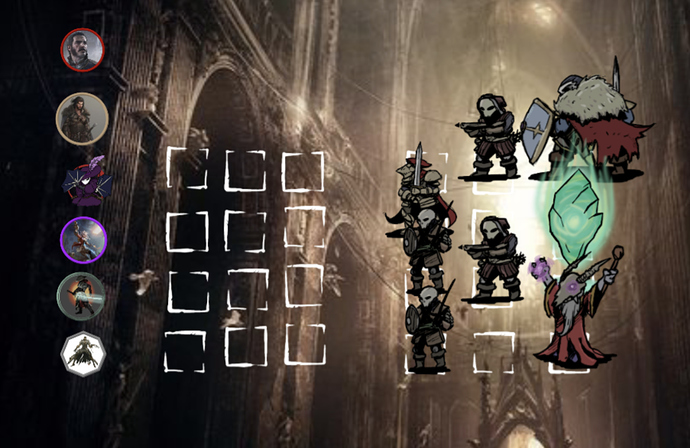 First of all, great read! This seems like a cool plugin I’ll have to try at least once.

I’ll make sure to post something here once I’ve been able to organise my mind a bit more, but my first impression is that this is similar to zones, in the sense of combat simplicity; since it places more of the content onto imagination than a map per se. Yet it has a lot of options to add mechanics and hidden secrets to uncover.

Have you used this only for combat, or also during non-combat scenes?

I absolutely love and adore the visual aesthetics. And I want to like this, but I just can’t see myself using it, for one simple reason. To me, it kills the roleplaying and makes it too board gamey.
In combat, I want to be kicking over tables, swinging from chandeliers, dive for the fireplace to grab something I can use to set the room on fire, and generally “roleplay in the environment”, and not just play a game of “I hit - You hit”.
From a tactical point of view, this setup makes total sense. I love the idea of hitting lanes and rows, and all that.
But how do I know which enemy is dangerously close to the cliff edge, so I can sparta his rear end off it? And if I want to abuse the shadows of the fire I just started to sneak around, and make a hasty retreat while barring the door, catching the enemies inside the burning inn?
Not that I would ever burn down an inn… That would be a disgrace towards drinking establishments and mead throughout the realm. But you get my meaning.

But again, I absolutely love the aesthetics. There’s just something about the white boxes on the atmospheric background that rocks so hard!

Definitely a little too gamey for our tastes too. We had a blast playing with it, but we went back to the more free form top down butt-kickery as well. It was a fun experiment: combat went really quick and everyone had a blast, but you just can’t mess with the freedom of the traditional battle map experience.

I just tried it for combat since I’d made all the battle maps for a physical table and had to transition 2 days out from game day. We just dove into Roll20 and I needed a way to quickly get combat up and tell the story of the scene. It was more of a necessity informing the method, and we tried it a few times, but found we wanted the freedom of the traditional battle map experience. This was a blast though, and I could definitely see myself playing in a game like this that’s more purpose built for it, but it was a great stop-gap as I learned the new gaming medium and prepped.

OMG I AM TOTALLY FANBOYING ON THIS!!!

Yes. This rules. I have wanted to figure out how to do this exact thing for a while and might try to implement it into a one shot.

At the very least, this would be fantastic for random encounters! That way you could save your prep time for big battles and encounters.

I thought you might dig it with the final fantasy campaign! With a little more work, I think a game could be tailored for it and have a really great feeling to it.

One thing that was really great was a “Summon” that played out. Players were having a battle in a city square as the whole place is burning down. Meanwhile, their battle wagon driver was making his way through the city and around the battlefield, so they could “Summon” him for a drive-by that dealt damage to everyone in a row. He could be summoned on a round timer as he drove around the undead, navigated the explosions and rubble, and could make another pass. It was a blast.

A few more thoughts if I may! 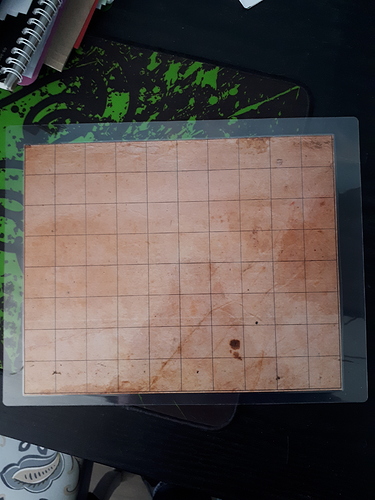 I love this idea. I don’t know if every player would but I like the idea of a table top RPG where video game style elements are incorporated. I would love to see more!

One of my players loved that it was so portable. He carries around a pocket-sized folding Chess board with little pieces in it and said he could use that as a battle map anywhere he went using this set up. I really liked that idea. Bonus, one of the RPG Mainframes recently talked about Hank’s transition to gaming in a public space and how necessity has changed the face of his game. When my friend referenced his portable board I thought of that as well.

Those images are so so awesome. Thanks for posting this. Like others here, I feel that it might feel a little too restrictive and board gamey for my taste.

But so much of what you wrote has bells going of in my head that this might be a great planning tool. Attaching timers and treats and mechanics to the squares could be really great DM journal shorthand.

Or maybe this can be pared down a little bit to jive more with the UDT style abstraction.

Anyhow, really cool stuff, and you’ve given me a lot to think about

Very cool, it reminds me of the abstract combat fields from like games like Ryuutama and Ancient Odyssey Treasure Awaits.

A brilliant solution in its simplicity! You definitely deserve a hero coin.
If I had to develop your idea a bit, I would add various obstacles in place of some slots, just like in “Warsaw” the game. 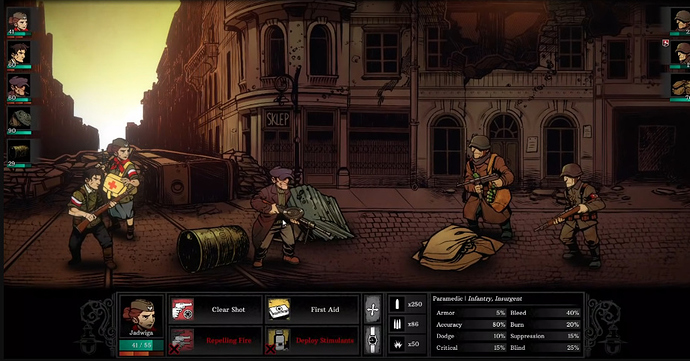 So I’ve been playing with your idea for half a day and it turns out that your method allows you to generate random terrain with two clicks on the Roll20. You have to admit that what you came up with has real potential.

Very cool work! I definitely think it has legs for a full design around it, especially for minimal prep/playstyles. I’ve spent a bit of time working with dungeon and encounter designs and find it to be pretty easy to work with. All it needs is nuance specific to the design to make it feel fully fleshed out, I’m just not sure I want to get into developing something like that while my present side gig is taking up so much brain power, haha.

If you want, we can join forces to complete your project

This idea sent me searching for this blog post where the blog’s author sort of develops the idea further for a abstract combat field similar to the Treasure Awaits version. As that game is more old school underground rooms and hallways, then it makes sense to encode the natural occurring formations into an abstract. The things that stand out to me are the bits like “sneaking” or “features” areas that kind of turn into FATE like zones where the character isn’t in the fray anymore.