adding an ability on sheet is add two “New Ability” currently.
cant seem to report the issue on github

How are you adding the ability? Plus button? Single click adds 1 ability for me. Anyone else able to replicate the bug?

using the icrpg.ircrpgcharactersheet2e using the + on the sheet. 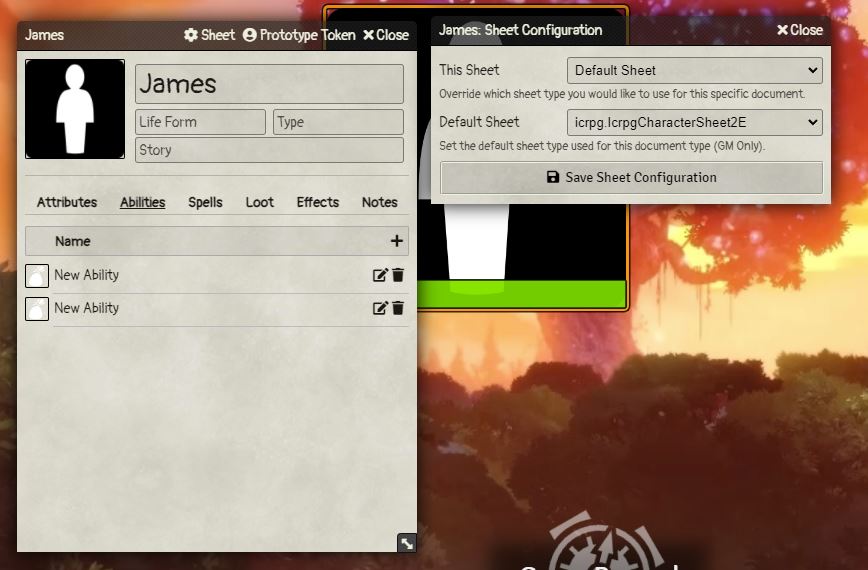 I’m also been prompted two time for each entry.
I’ll have a go at reinstalling it in case I have some kind of other issue, causing it.

Interesting. I can’t replicate on my end. Let me ping Enso and see if he’s seeing the same behavior. FYI, version 3.0.4 went up today to address the inability to close the Global Target update window. We’re working on updating it so that you can’t open multiple instances of the box

Well it appears it might be something my end.
After leaving it off overnight, I’m no longer getting double “ability” items created.

Still prompting me twice when deleting an “ability” item but I’m not seeing any errors in the console so.
so its probably me.

nice work with the update, keep it up

First love this, lots and lots of great work here.

I’m having an issue that is likely just me not understanding the setup. When I try to create an item and add a default attribute bonuse I can’t seem to get the bonuse to appear on the charter sheet (under Loot). I have tryed equiping and un-equiping, chaging up the name of the attribute, ect (see attached).

Any way I could request a very quick tutorial/explanation on how to create an item (I assume that spells and abilities will work fundamentally the same). Im using icrpg.IcrpgCharacterSheet2E.

Thanks and again, fantastic work here. 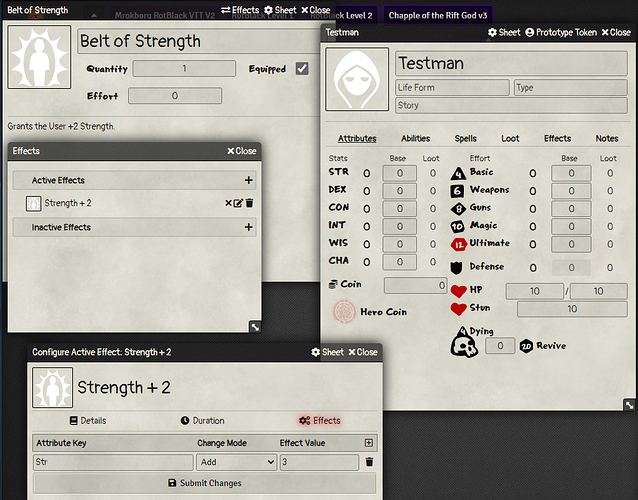 So, I did some digging last night and am embarssed to say that I answered my own question. To close the loop for anyone else with the same question the proper way to format a bonuse is “data.X.Y.Z”

Where X is the type of bonuse (effort, attribuate, mastery), Y is the attribute (str, cha, int, gun, magic, ultimate ect) and Z is the source of the bonuse (loot, base) ect.

To get a full list of attributes and the correct format for each open a Charter Sheet, click on Token, click on resorces, and then click on Bar 1 Attribute and you will get a drop down menu of all available attraibutes. Just remember to add data. before the attraibute. 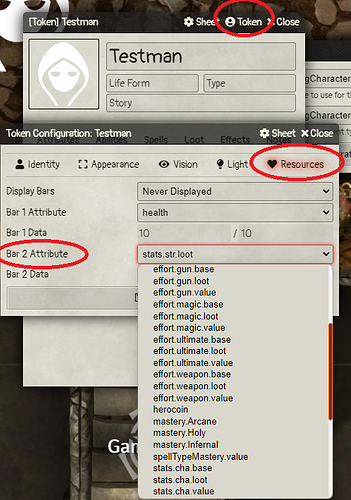 Hi Marvin,
Thanks for closing the loop for me. Got a significant promotion at work that has buried me and I’ve not been as fastidious about checking in here for questions as I should have.

I was in the process of putting together a data map that has a lot of the detail you already sussed out and provided the excellent screenshots for. Here’s a quick layout of the data model. 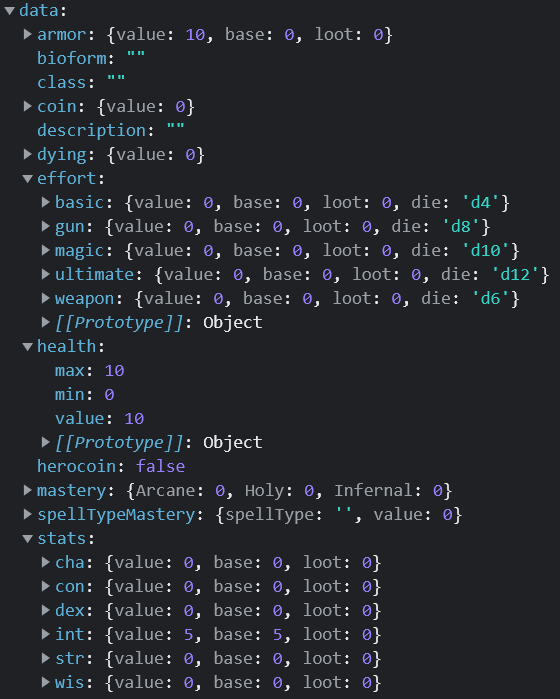 Hi there, I can’t seem to activate the PDF Importer in Foundry, am I missing something? Thanks

Getting ready to pull the trigger on hosting a game an ICRPG game on Foundry VTT.
Largely due to the one time $50 GM price and because of the work Tom has done.

My one question is how do the hearts work in Tom’s kit. I’m planning to be a little more
granular on my hearts using 5 for each instead of 10. Is there any roadblock to doing that?
from the sheet images here I’m suspecting not but thought I’d ask.

I’m also getting double when I click on the + button under abilities. And when I go to delete one of them, it shows me two “Are you sure?” delete prompts. I noticed you don’t have a way to submit issues on the github repository. That could be a good way to track bugs and feature requests?

As for feature requests, It would be nice to have a toggle of the global target number to be hard or easy, essentially adding +3 or -3 to the target number. Edit: So I just noticed the easy and hard buttons when you roll an item, but how about straight stat checks? I.E. Roll strength check. Should be an easy way to indicate Easy or Hard on those rolls too. To keep it from being cumbersome and always having to see the prompt and click easy, normal, hard. You can do it similar to the DCC module where clicking the die just does a normal roll. But if you hold down control when you click it, it brings up the prompt to allow adding mods, and choosing easy or hard.

Otherwise, it looks good. Thanks for working on this!

So after playing around with the system for a few minutes, I have some questions. I’m new to ICRPG so this could be me being unfamiliar with the rules.

Weapons should have an indicator if it’s melee or ranged and automatically add either strength or dexterity bonus to the roll. Or maybe just have a modifier field where you can just put + @str. Right now you have to type in + @str or + @dex for every roll make and that is cumbersome. Same thing when rolling effort. Should be a field on the item to always add this.

From my understanding, PCs attacking monsters use the global target number but monsters attacking PCs should use 10+ their defense modifier. This doesn’t seem to work for me. Actually, the effort dialog doesn’t show even when the global target is met when targeting a PC. When I turn on the setting “Use NPC Defense Value”, this works for PCs attacking NPCs but nothing for the opposite. It would be nice to be able to automatically target the PC and show the effort dialog when PCs are hit.

It doesn’t look like the heart concept is used here other than showing a heart icon. You just manually type in their HP so you can put whatever you want.

My understanding of the hearts is that it’s like a simplified CR system, not a granular representation of HP for PCs. For NPCs, I’ve heard of folks simplifying their NPC into chunks, so each time they take damage, they loose 1 heart, as opposed to decrementing the monster HP.

The system as implemented for Foundry will automatically apply damage to the targeted NPC if the attack hits. I can look at effort to have a Basic/Granular HP as a system for an upcoming version, if that’s a strong request.

I’m thinking that, design-wise, if you opt for the “Simple NPC Health” option in the system settings, 1 hit removes 1 heart, a crit removes 2. I have to see how much extra work it take to work in half-heart increments, which is probably the ideal solution for the simple implementation.

It weakens the NPCs somewhat and flattens the math on a dagger vs a heavy crossbow, but that’s all I can think of for implementing a Simple, Heart-based Health system for NPCs. Anyone else have any other ideas?

It would require an overhaul of the “effort” system to support either system, and some new graphics. And I need to consider the consequences on non-combat effort rolls, but I’ll investigate.

New Feature: Automated Animations Support
-You can now add animations to items. See the repo at https://github.com/otigon/automated-jb2a-animations for directions.

Items now also have a box to allow you to enter the default use roll, so you can define things like “1d20 + @dex” for ranged weapons and it will use the dex bonus"

We think we solved the “double item” bug. I haven’t been able to replicate, let me know if it pops up again.

We started doing the framework to support a “Simple NPC HP Mode” to allow either hit points (like in D&D) or Hearts (each hit removes 1 heart, a crit removes 2 hearts - NPCs only). It’s not ready for use yet, but we’re working on adding it.

Foundry Version 10 support is in, so we should be good when Foundry releases their v10

We are looking at ways to make quickly toggling the Global Difficulty more convenient for GMs.

Great idea. Not sure why I didn’t think of that during the design. We’ll probably add a “Use” area to the individual item, so you can update the formula from 1d20 to anything you need, like “1d20+@dex”

Hi, I have no idea, if I am doing something wrong, but animations are not working for me. I went through instructions of the animation modules, using automated anim. + J2B module of free assets (or how is it called) and set up the effect htrough item sheet, using “custom animations”, but when I drop the item into sheet and roll it through the item roll button, no animation happens.

Also, any recommendation how to handle temporary status effects, like +armor for 1d4 rounds?