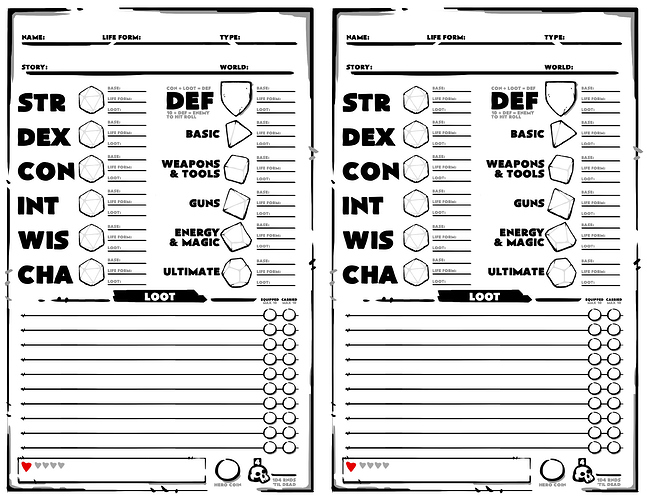 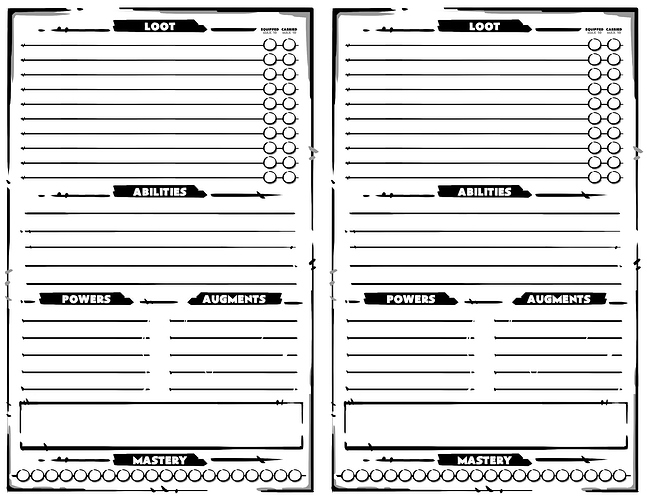 Just a couple of character half sheets I put together for the fun of it. Enjoy!

(Note: I did pull the dice from the main QS2e sheet)

These are great. Nice work

Very cool sheet! I was going to mention this when you were working on it over on discord, but what about a folding version with four panels? You could have the main character info (Stats/Effort/Equiped Loot), Page 2 could be Loot in your backpack, page 3 could be abilities/powers/augments and page four just general notes.

Anyway, don’t listen to me, this is excellent and I can’t wait to use it!

The question all makers hate. But I have to ask. Is it fillable?

Could you make a business card-sized character sheet?

The question all makers hate. But I have to ask. Is it fillable?

Unfortunately no. That’s a space that I don’t really delve into. Mostly because I’m a fan of pen and paper and because Adobe Acrobat breaks my brain

Could you make a business card-sized character sheet?

I could but I don’t really know if I’d ever use a character that small. At that point, I’d just write everything on an index card

The sucky truth is I do not see a near future where meeting around a table for a game will happen soon. God I want it happen i keep having a itch to buy dice. I keep hoping i will wake up from this nightmare. But we need more Fillable Sheets please.

Great Sheets! Have you ever thought of doing a pocket mod version of the ICRPG Sheets? 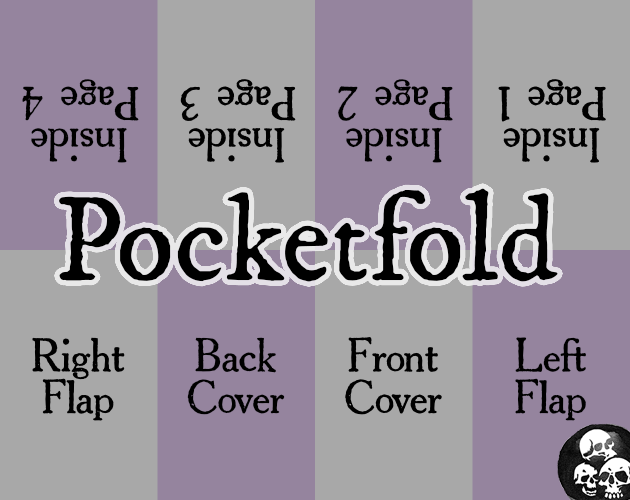 Is there a landscape form of the beautiful work ?

Not as of this moment. These were designed to be half sheets to print two per page. I’m not sure how landscape half sheets would work, but there is a full-sized landscape version here:

[icrpg_2-5e_character-sheet_landscape] Not official but approved for shares. Enjoy.

Your two-up half sheets are awesome. They have become my go-to means for recording detailed notes on important recurring NPCs because they are compact and handy. I print them double-sided so I can lift the sheet up on my clipboard and review the secondary loot and abilities on the reverse.

Awesome! Out of curiosity, how do you use them for your NPCs?

I don’t include a lot of NPCs in my games (working on that aspect of my game currently), but when I do I end up going with a modified version of GMGrizzly’s NPCs as LOOT, using a simplified quarter sheet of this one: 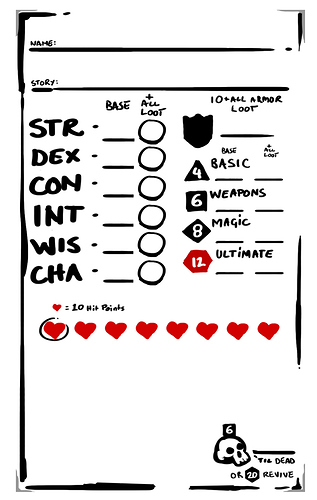 My player group in my weekly game is small, usually with only two (sometimes three) PCs. While they have gone on a number of dangerous adventures as a spellcasting duo (a well-armored healer priest and a blaster mage), they have a recurring set of NPC companions that started as hirelings and have become valued and trusted friends.

Additionally, as the campaign revolves around a ruined village (sacked repeatedly by hordes of beastmen) that the PCs have taken under their wings and begun to rebuild, there is a cadre of key NPC villagers with whom my players interact on a regular basis.

Add to that incoming refugees from other villages and (of course) the big bad evil guy who harasses them at regular intervals (he dropped the priest to 1 HP last session with a single level two Arcane Missle), and very quickly I have a full roster of fleshed-out NPCs to maintain.

I use your character sheets because for the most important nonplayer characters—especially the ones who go adventuring with the party—I keep very careful tabs on their inventory levels, loot acquisitions, and reserves of coin, as well as their in-game progression. I actually allow these key NPCs—allies and foes alike—to “level up” as time passes for the players by awarding milestone rewards and mastery abilities (for NPC-rolled nat 20s).

The half sheets help a lot!

Oh nice! That sounds epic. I’ll have to chew on that one

What is this “GMGrizzly’s NPCs as LOOT” of which you speak? Doust thou haveth a linkie-thing?

This is the original post, but I simplify it a little bit just so there’s less for my brain to chew on during a game.

Interesting. Upon first reading it I thought “this sounds great, but needlessly complex”, so I shortened it, I don’t need all those tags and traits

For example, say I purchase a donkey as I would need to control the donkey I would have to equip it so it takes one of my carrying capacity but what if it gave me an additional 10 carrying slots for loot? Or say I was playing a mage and I had a familiar? What if it simply gave me a +2 on all magic rolls using INT? You could hire a shieldmaiden, she just helps keep you safe, maybe giving you a +2 to DEF. I don’t know, still working on the idea.

Wow. Love these. So, obviously, I had to steal em!

See that’s clever, I printed mine double sided with them flipped on the long edge, so both sides are the right/same way up. I sometimes use a clip board, so I will print some with the backs upside down. Every day is a school day.

I do exactly the same thing, printing the backs upside down for clipboard use.

to Kane for such a useful contribution.