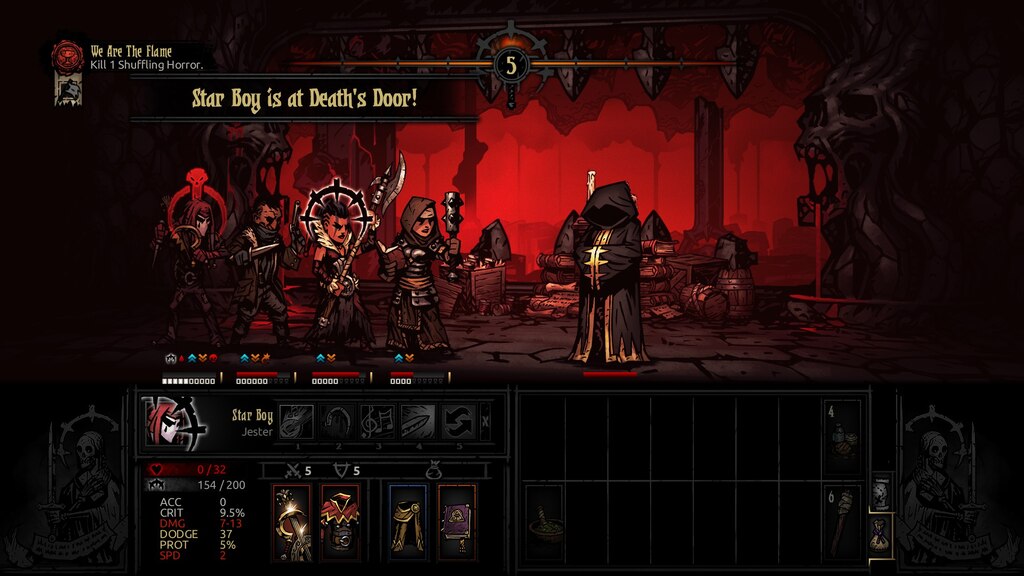 So I’ve been playing a lot of Darkest Dungeon the last couple of days (and as always I am bit late to the party), but there’s some interesting ideas in the game that I thought of translating into ICRPG. This post is about the “Death’s Door”-mechanic.

On the Darkest Dungeon wiki it says:

When a hero is reduced to 0 HP, they fall into Death’s Door.
While in this state, they will suffer severe stat penalties, plus the hero has to pass a Death Blow resistance test if they take any further damage.

So for ICRPG, instead of rolling a d4 when you die to determine how many rounds you have before you are DEAD, you can implement the following Death’s Door mechanic, which functions a bit like a condition in D&D or Pathfinder:

If you reach 0 HP you enter DEATH’s DOOR. All checks are HARD. Make a CON check every round or immediately perish. If you are healed you survive. All checks remain HARD until your next rest.

I know that rolling a d4 is already pretty hardcore, but what do you think about this one? Would anyone use this? As always feedback is appreciated.

So, you can still act while at Death’s Door or what?

When on DEATH’s DOOR you can only move NEAR on your TURN. You can’t use your TURN to RECOVER.

You are running or crawling away but can’t do anything else. You have to be healed by somebody else or get the hell out of wherever you are.

Yeah, I’ve seen something like that before, to me it would depend what kind of injury your character got at 0 HP. For example, if I hurt him at the legs and he falls to 0 HP then he can crawl, otherwise it’s unconsciousness until death.

If you subscribe to the idea that HP are “don’t die” points, then you could argue that at 0 HP, you’re all out of luck. Any attack against you forces a save vs death. Succeed or die. A success means you somehow evaded the strike, a failure means your time is over.

Death’s Door is a fun DD mechanic. The old D&D version was also fun! Unconscious at 0 and bleeding out, death at -10 HP (or -CON, depending on your table).

LIke your idea when at 0 HP they roll HARD but can still move and act.

Once the DEATH HEART drops to 0…you perish

Only resting restores a DEATH HEART.

This sounds like it could be fun! Try it out at the table, tinker with it, and come back with your assessment. I would encourage letting PCs still act while on Death’s Door, and maybe being able to use hero coins to ignore the “HARD for all rolls” modifier. I made a couple of below 0 HP charts called “Banes of Combat” and “Boons of Adversity” which applied certain injury categories with modifiers, but also certain benefits/circumstances by which they could ignore them in an attempt to capture that heroic last-ditch effort feel, so I can see the appeal of a mechanic that allows for more than, “you fall down, and have to wait to be rescued.”

I think you should reconsider the “all checks are hard” part. In my opinion, it is better to say “all hostile actions against you are easy”. Because it can be boring to be technically allowed an action, only to be disqualified by poor odds.

I never finished it either. I don’t think I even got very far, but pretty sure I got the point.

That would give them one extra heart though, wouldn’t it?
I was looking for something in between the “0 HP = ah, yeah I’m dead” and “0 HP = I have d4 rounds to have someone heal me or get up by rolling a natural 20.”
Your main objective when you drop to 0 HP and pass your HARD CON check is to run away or get to safety somewhere.

I was thinking about it and I am not sure.
Yeah, it can probably be frustrating to be allowed an action and then fail it because of the odds.
But having your own checks be HARD instead of all checks against you be EASY gives you as the player autonomy. Your checks are HARD but you are the one making them, you can muscle through it, you can escape and survive (or go out in a blaze if that’s what you want).
While having all checks against you be EASY can feel very dissatisfying because you as the player have no control over this. You can only hope for the GM to roll poorly.

This is the problem with some games, isn’t it? Feels like, once we got the point, they’re not worth playing anymore. Which is a shame…

@Olav and @kagozaiku I think that it is a good trade-off to be the Reaper’s victim in exchange for a chance of getting out of your bad spot! All rolls against you are EASY and the Game Master becomes the REAPER: he’s the one who rolls your Death Saves ATTEMPTS. On a success, he rolls one of these Effort against your DEATH HEART:

And when your DEATH HEART is down to 0… your character DIES!

What do you think?

I’d feel like my odds were better if the GM’s rolls against me were easy rather than everything I tried to do was hard; my control of the statistics is the same - no more control over how my dice roll than the GM’s dice. My personal advice is to reward players for being on the ropes so they can feel that it’s not just a death spiral, like give them a hero coin automatically when they hit 0 HP.

A cool idea, but I worry about the cognitive load at the table required from tracking another numeric condition. I wonder whether there might be a way to do it without that.

What do you mean a numeric condition?

'cause we can make it “worse”!

That looks cool, you should give the conversion another shot!

Thanks, man. I confess I’d like to, but I haven’t felt particularly inspired recently. If I have the time I’ll try to play the game again and then add more stuff to it.

This is the problem with some games, isn’t it? Feels like, once we got the point, they’re not worth playing anymore. Which is a shame…

You are so right here that it hurts my soul.

Another pool of points - a condition measured by a number. I think I would want to lean for fewer things to track, and more dramatic moments. The essential question to me isn’t “how badly is the character hurt?” or even “what kind of injury has the character suffered”, but instead is “will this character risk dying from their injuries to accomplish the next thing they do?”