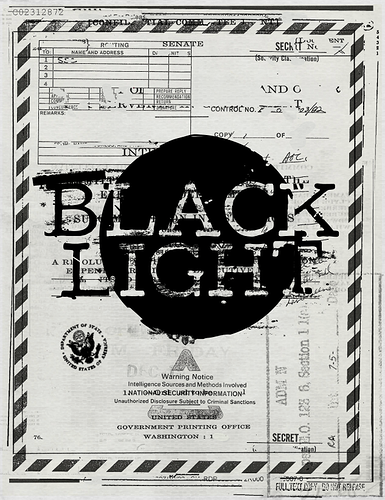 There is a veil that exists between the realms of human experience and the mind-shattering truths of an uncaring cosmos. Dark demons and cosmic terrors, birthed before creation, lurk on this edge of space and time. They wait and they are hungry.

It is up to the shadowy Agents of Black Light to hold that veil, to limit the encroachment of these forces of darkness upon our human existence.

As an Agent you are a member of a sleeper cell acting outside of institutional oversight. You lead what people consider a normal life until activated by your Handler for a Black Light Operation.

What lengths will your Agent go to keep humanity safe for just one more day?

This has been a long and educational journey in creating and getting Black Light out to the public and many wonderful folks were involved in the process. Thank you all. I hope you enjoy… sanity permitting, of course.

I bought my copy. Can’t wait to bring it to my table once the “Corn-Teen” is over… Nice work @Shadymutha…

Awesome, so glad to see this finally arrive! I’ll be grabbing it later today! Congrats and great work as always.

Instant-buy for me. This was a darkly satisfying joy to play and playtest! I can’t wait to dig into the complete version! (And maybe one day get my adventure notes cobbled into something useful and run/share them!)

Purchased. This supplement is a true distillation of Delta Green for me. All the needless complexity stripped away, leaving only a slimy, beating six-chambered heart.

Seriously, Shield Wall, this supplement is worth your time. Mark did an excellent job putting it together, and the tone and feel are on point. It’s definitely worth purchasing.

Reading through the Agent section again last night, I couldn’t keep ideas and exciting ways to put this into play from popping into my head. A TON OF USEFUL STUFF HERE. And I have barely scratched the surface of the Handler section yet, but manoman… Just the parts that jump out at the eye are enough to make a Byakhee do loop the loops of joy!

I Too bought it as soon as I saw the announcement… @Shadymutha had the temerity to post it while I was running a game!

With the exception of @Ezzerharden and @Runehammer and a couple of others, I have probably leafed through the most versions of this than any other non-creator. It’s still a good read.

It makes some assumptions of intelligence on the part of the game runner…but google will get you where you need to be.

Prepping to run this, might be nightmarish as playing in a 3-day session!!!

How, does one explain this is the most rewarding table top RPG game they have played in, yet they don’t want to play it more than very few times a year?

It’s Like watching Seven…great movie! one of my most recommended movies, I’ve watched it twice. 8mm similar genre…only once (it was good, not great!) Thats the tone and intensity I think this game allows. but it is not my weekend game while I have a couple of beers game!

Purchased, have read it through twice so far. Can’t wait to run it with my FG group.

Dayumm! I’m so glad you all are… enjoying(?) Black Light. And thank you for your kind feedback. It truly pleases me to know I’ve caused guts to wrench and nerves to fry.

I’ve set up a Black Light discord at https://discord.gg/eSxhp2X

Take a hero coin because you rock!

Purchased! I can’t wait to dig into this!

Thanks for all the support. We’re currently #3 in Bestsellers Under $5. Pretty cool to see that, plus Runehammer’s 5e Hardcore up there at the one spot.

Got it. Can’t wait to unleash this!

Shield Wall!!! Congrats on helping a Shield Brother out!!!

Just bought my official copy! I had a great time running thru a scenario gm’d by @Shadymutha himself and even had the privilege of having @Runehammer as a member of our team. Great fun (creepy, weird, spooky fun) was had by all! @Shadymutha, I don’t know if I ever thanked you for the card and stickers, so THANK YOU!!!

Hi there, is there any filable character sheet of Black Light?
Goint to run as GM this awesome thing

Not that I know of, sorry.

Maybe you’re right. I think i’ll burn down everything after the session and get rid of those corpses.

But before I start, can you explain the TOOL KIT Technology type from starter loot. What should it be? Can you write some examples?