So I’ve been hacking and slashing my ICRPG core mechanics to a point almost beyond recognition using the kiddos at the local library gaming club as “test subjects” with a lot of success! There’s still one thing that bothers me a lot tho, and that is the subject of… Armor. 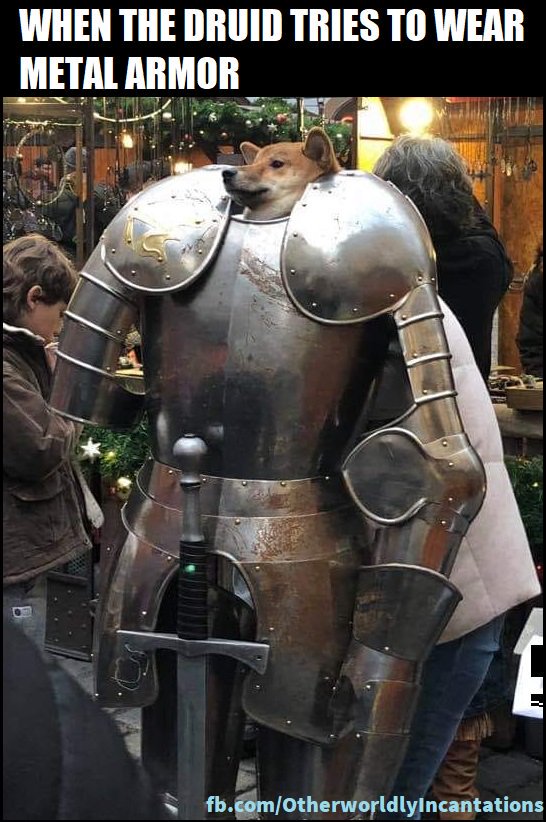 Inspired by The Black Hack and Dungeon World, I changed combat rolls to make players roll for defence (STR for melee, DEX for ranged) instead of monsters attacking. This feels more fair and provides players with something to do when “NOT IN YOUR TURN” mode. Now armor… I need a way to implement armor that keeps the core book loot compatible with my games. So a couple of choices came out.

First there was armor as a “defence bonus”, which actually makes a lot of sense but quickly turns player defence rolls into a “+8/+10” bonus fest which is reaaally annoying for the way the math of ICRPG is meant to be.

Then came armor as a “flat damage reduction”, which is how it works in dungeon world. This is nice but in a world of d6 weapon damage, it quickly makes armored characters unstopable and unarmored characters toooooo fragile.

“Armor as a damage treshold” (ignores damage up to N amount type of math) was another thing I tried out, and it looked nice on paper but in reality it just made armor useless if you don’t stack AT LEAST 4 or more armor.

So FINALLY I came up with the Armor Points or Armor Dice. The idea is similar to how TBH handles armor breaking. Each time you fail to defend yourself and take damage, you might spend a number of your armor points (a normal armor chunk by-the-book grants +1 armor) to roll a number of d6 equal to the amount spent. You sum up the numbers rolled and that’s flat damage reduction. Shields would work as “defence bonus” and can still be broken instantly for TOTAL damage avoidance.

Let’s say I have 3 armor, I am about to receive 8 damage from an enemy attack so I roll 2 of my armor dice and get a total of 7 damage reduction (4 and 3 on the d6s). Now this works really nice as it lets players handle the fiction of how and when they want their armor to protect them, and it makes it an “active” thing rather than a passive stat on your sheet (which in my book is a good thing). I do still need a way to “refresh” armor points tho, so any sugestions are welcome. Maybe once per round you refresh half of your total Armor Dice?

I actually love the idea of defensive rolling. It keeps players engaged and prevents that question “does a 15 hit you?”. I thought about allowing dodge and or armor rolls depending on class or stats. Maybe make armor break more often so the player has to repair it. Armor points looks pretty cool I’ll have to try this.

As far as refreshing armor - I’d say spending turns during hours time attempting to repair it would be a good way to go. Maybe allow full repair after days. Spending coin to have a professional smith repair it without rolls could be cool.

This sounds interesting. Do you have the Monster roll defense too? Or do players make an attack roll as normal?

As for refreshing armor points, handle it like HP recovery. Player’s make an repair roll

I like rolling as less as possible, so I just roll monster’s damage and describe actions, everything else is player against target! Yeah I ruled out that hp recover is 1+CON with no roll, but you need to “pass your turn” (no action or move), I use Magic Points for spellcasting and its recovery also works simillar to that so the most logical route for my table might be that same mechanic of “recovering, breathing and re-focus” to get back your armor points, maybe allowing moving but throwing in that repair roll might work indeed.

I like the concept. Maybe also look at tiers of armor and have the dice decide if the armor gets to protect them. For example, wearing a plate mail helmet is technically armor but to count that as somehow able to protect against any attack brings to mind this character dodging about to try and get hit only on the head. I’d say something like full plate would be highest tier so on a d6 1-5 = armor takes the hit, on a 6 = it gets through a gap in your armor. As the armor tier goes down then the odds of getting hit in a gap gets higher. If you have a wider range of armor then increase the die type. Just a thought.

I like rolling as less as possible, so I just roll monster’s damage and describe actions, everything else is player against target!

I’m not familiar with the rulesets of DW, so to make sure I understand, here you’d simply state “Monster attacks Carl with a club” in a Target 12 room. Carl then rolls against Target 12 and adds his STR bonus to see if he defends (regardless of any Monster attack bonuses)? If unsuccessful, Carl can choose to allow their armor to absorb the damage, or not?

STR for melee and DEX for ranged… now what about monster attack bonuses? Just say it is a HARD roll if the monster is “reaaally strong or accurate”. It reliefs a lot of pressure on the GM side and gets rid of that akward moment when the GM plays his turn and it takes a lot of time and everyone gets bored lol.

I like it, man. Especially from the standpoint of keeping players engaged whether it’s their turn to act or not. And it addresses fundamental rules of gameplay…

Rules of Gameplay
Rule 1: Be cool
Rule 2: Roll often
Rule 3: If you’re not rolling, be cool

You remove the bonus from your monster by having the players roll defense. You should make some bosses hard for player defense rolls to account for this.

Kids in a library — this makes sense for keeping their attention. But your suggestion sounds complex. The key to ICRPG, in my opinion, is quick play with fast mechanics.

Make armor absorb damage. Players always suffer a minimum of 1 damage on a failed block. So if they take 2 damage and have an armor of 4… they still take 1 damage.

On a critical hit (they roll a 1 to defend) a piece of armor is destroyed AFTER absorbing damage.

10 hp is not a lot of health. You should not have a problem with people not getting hurt. If someone goes for an armor build, they will miss. A lot! It does not take very long for someone to realize it is better to deal damage on your turn than to be a punching bag on the GM’s turn.

This helps with ICRPGs philosophy of losing loot too

That would work more like in The Black Hack… The thing is that I really want shields providing the TOTAL damage reduction at the cost of braking instead of body armor.

Now I know it sounds a little too complex, but it is as simple as rolling some d6s from your armor pool. In fact, keeping an armor stat of 10+ and having to subtract from it how many hits you can deflect is kimda weird…

The idea of sacrifying loot for protection is awesome tho!

Yeah I get that it is a mechanic that CAN slow down gameplay a bit, but testing it, it shows as super easy to explain and intuitive.

As it is a player thing, it is them who make the simple calculations and tell you how much damage they recieve while you keep doing your GM things.

Also, the idea is to actually make armoe builds satisfying! I have a warrior who stacked 19 armor on another game, and we talked about how he was reaaally bored and how enemies either blast him down or not even touch him. The odds of survival with a double defence like this are actually smoother and you can easilly remove the armor cap.

For the record I really like your inputs and alternatives on this thread, I just defend the reasons why I implemented armor this way 'cause I like it and for discussion purpouses haha

Oh - thought it was theory. Application is all together different. If your table likes it, awesome!

I say, game the way you like to game. But I have to agree with @BigGrump. When you have players just roll their stats, you lose ability as a DM to challenge them. In a long running campaign, you’ll wish you had your own to-hit bonus as a DM tool.

I also think it’s better as a DM to have the variety in your games of rolling against players and sometimes making them save against the room target. Each has a specific feel, and doing it all one way robs you of that variance.

Also, I’m just not a big fan because of the limbic jab to the brain. When the game becomes all saving throws all the time, it takes a toll as a player. It’s far better to feel as if the forces of evil (and the DM’s hot dice) are against you, rather than feeling like you’re blundering your way into the jaws of the monsters all the time. While I realize good DM descriptions can mitigate this feeling some (probably more for younger players), I just can’t shake it — probably because I know what’s happening from a game design standpoint.

But again, that just comes down to preference and personal taste.

I love your ideas man. You got these have committed anywhere?

What Alex said. I tried the “player makes all the rolls” and my table hated it. They actually wanted the break of being rolled against. When they do all the rolling, they said they felt like they were in school constantly doing math and having to think

I’ve never had anyone complaining about having to roll dice or “having to think”. I mean…

I think it all falls into the subjetivity of personal taste and what works best for everyone, I like rolling dice but I prefer my players excitingly reacting to the things I do/narrate with their own dice rolls. Maybe I also just don’t like a weird situation where you kill a player with a nat 20.

I might compile a “hack book” for ICRPG later, I mean at this point I have so many mods into the game that it does retain the core feeling but gameplay is much different from the book xD

Hmm… i should try this, Have read all and i will try these idea of Defense and Armor. I like that the armor is represented as a D6 to reduce damage, sounds simple and fun.

But let me get something straight, each character would start with a base armor of 10 like usual (so they would have 10 D6 dices), and later they can add to that with loot? or the base armor is 0 with this mechanic?

Honestly I think that’s all getting a bit overcomplicated, you’re going to wind up with the rule bloat that ICRPG is designed to get rid of. Rather than having them roll str or dex I would have them roll armor. Normally armor is 10 plus a bonus, remove the 10 and have them roll it. So if they would have an armor of 15 it’s just a +5 to their defense roll you know? Easy peasy. No new mechanics.