The Valkyrie and The Morrigan

So I’ve actually been sitting on these for a while and had forgotten to share with my lovely shield brethren. I designed these sets for completing two quests. so I figured I’d leave a bit of the the quests, some hooks that i think most could drop into their game worlds for each and then showcase the effects. You can opt to release the items slowly as rewards for partial completion (my preferred way) or you can give them at the end.

THE MORRIGAN
After King Edrik disappeared and the line of kings broken, dark dreams have stirred upon those who were loyal to him of a raven beckoning them to seek him out, and warning of treachery among those who he may have called friends. Kidnapped and killed, the Kings Blood proved valuable in a ritual of a sinister wizard born as Draven and recrowned as Morgane after imprisoning the Herald of fates known as The Morrigan. The Morrigan was only barely able to escape into the realm of dreams to find heroes who can track down Morgane and free it from its prison inside his flesh. The items will be granted to the heroes who free it.

Info on Draven; A powerful wizard who stumbled upon a shard of, some strange, otherworldly- deep purple crystal, which tempted him onto a dark path through its whispers. Draven is now lost to the crystal and knows only of its desires for power and to spread its influence across the planet. He hides his face in dark robes for those who would look upon it, would see how the corruption has tainted his very flesh, and whatever force behind the crystal, it constantly seeks more power, the power of the very gods, which is what drove him to hunting down The Morrigan. 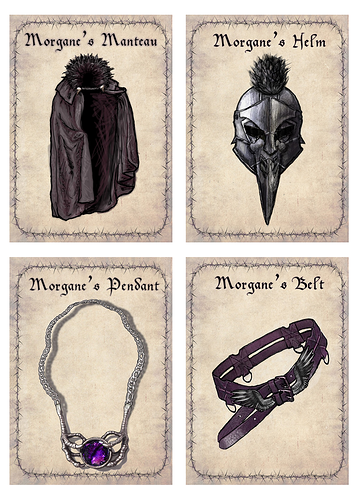 morgane.png768x1056 1.08 MB
Morgane’s Manteau ; When a close enemy hits you with an attack, you can become invisible until the start of your next turn.
“He danced around the battlefield as a shadow chases the sun, vanishing then cutting…”

Morgane’s Helm ; The helm allows a user to witness fate once per session- when you fail a roll, treat it as a success, FULL SET: treat the roll as a natural 20.
“Fate and future can be seen from the eyes of The Morrigan…”

Morgane’s Pendent ; The pendent allows the listener to hear things that could not be heard, as if fate herself is whispering in their ear. LISTENING checks are always easy.
“It whispers sounds from all around, through this, you’re always listening…”

Morgane’s Belt ; Attacks from stealth deal double effort.
“The scabbard perfectly designed for silence, aside from its victims last breath…”

THE VALKYRIE
It has been ages since the gods have visited our world, but one Valkyrie was left to pull those who showed true valor into the company of the heavens. Tasked alone with guarding the passage from our world to the next, the Valkyrie known as Soren was the most loyal and brave of the Valkyries fighting against the chaos in ages past. But even the bravest could not contend with some new evil. A sect of holy-men, devoted to the gods saw their followers turn their backs on the gods and this pushed them from a path of righteousness, to a path of vengeance.

One such priest known as Margaret, led a group of priests to the holy temple of Odin, where Soren lived, and brought with them some strange and powerful crystal and fueled through the blood of their victims, the priests cast a ritual upon Soren, and the bridge to the heavens- was closed. Those who remained were only further corrupted by this evil, and with her connection severed to her gods, even Soren could not resist. The temple has turned into a place of evil and hatred and none who have ventured there- return.

Defeating the foul priests and the corrupted Valkyrie, will release them from their prison of hate- and the Valkyrie will reward you with these items. 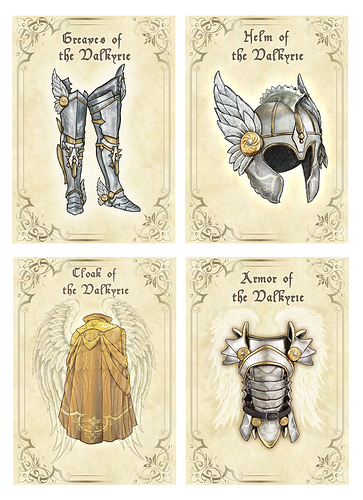 valkset.png768x1056 916 KB
Greaves of the Valkyrie: When falling from any height, make a con save- if successful, take no damage, if failed, take half.
“These feathered boots allow even the most clumsy to land with grace…”

Valkyrie Helm: Mental effects, such as Fear, Confusion, Sleep or other enchantment, must succeed on a HARD roll to effect the wearer, the wearer rolls EASY against these effects.
“Clarity is never far…”

Cloak of the Valkyrie: Allows the wearer to fly for 1d4 rounds, 1d4 round cooldown before flight again.
“With this cloak, one can feel as if they can almost reach the heavens…”

Armor of the Valkyrie: Once per day, ignore the effects of one WEAPON attack, FULL SET: reflect the effort back at the attacker.
“God’s bless this holy piece, some blows can simply never reach…”

THANATOS TOWER
Many ages ago, a mysterious tower appeared in the distant lands of our kingdom, and from this tower, shadowspawn and demons slowly trickled out. With each passing year, more and more demons emerged from the shadowy place, and so a hero known as Thanatos traveled to the tower to discover the source of these evils and to put an end to them. He has his 100 companions, blessed by Odin, fought their way level after level to the top of the tower until it was only Thanatos who remained, and here what he discovered none know. He sealed himself within the tower, locking the demons in with him and for many years it stood as a silent reminder to evils that once dwelled within.

Some say the tower is haunted, others that it is filled with holy relics from his fallen companions and treasure seekers, scholars, priests and kings have made many attempts to open the sealed stone gates of the tower, but all of them failed. However, recently one group of scientists developed a device powerful enough to blow the doors of the tower open, and managed to get inside. Met with shadow and flame, the scientists were forced to withdraw from their expedition and reported the sights of ghosts of fallen companions, haunted books and remnants of demons still lurking within the tower. Luckily, whatever Thanatos did to seal the creatures in, still holds them despite the door, which has folks speculating whether the gate was sealed to keep people from entering, rather than the demons from escaping…

Ve’s Boots: Efforts to push or pull the character must beat a HARD check, the wearer rolls easy against these effects.
“Stalwart they stood, unyielding to whatever doom…”

Vili’s Manteau: Use an action to link your character with another for 4 rounds, whenever that character is hit with an attack, you can choose to take half their damage.
“Friends stand together, sharing each others burdens…”