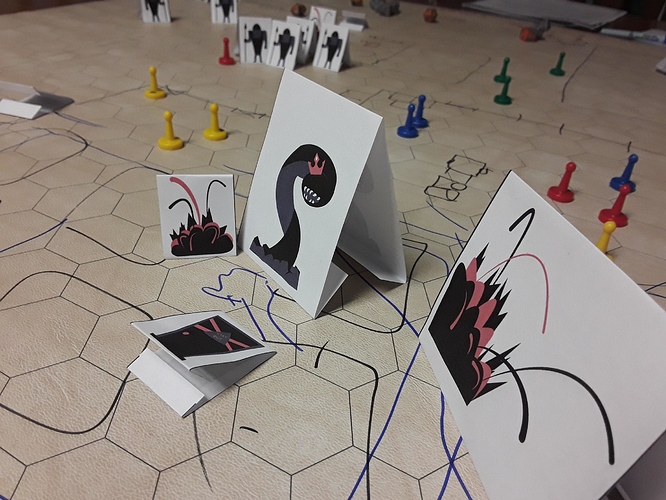 I was planning on continuing the Eyes of Sett adventure, but some of my players cancelled, so I figured I had a golden opportunity to test run my The Gar Tastes Funny filler adventure as a one-shot. It was a proud moment to be so prepared

[The%20Gar%20Tastes%20Funny%20Cover_1] Inspired by @BigGrump’s efforts and call to action, I pushed through and finalized my September contribution. I’ll preface by saying that I had no idea what I was doing, but I did it anyway. I tried to follow other’s examples when it comes to the legal stuff and if there are things that I did wrong and need to change, please tell me. Otherwise, feedback is always appreciated

Anyway, enjoy! If anyone ever gets this to the table, I would love to he…

Anyway, my players handled the adventure very well. They both built out a couple of rogues and immediately went the stealth route to investigate the factory. They both snuck in without much incident, but eventually were found out and the alarm was triggered. Chaos ensued, things exploded, shenanigans were a plenty.

In the chaos, my two players got separated. One ended up escaping out of the compound by lighting a fire to the compound with a hostage in tow, while the other proceeded to the restricted areas and eventually entering the boss fight alone. Not a good situation.

For six rounds, he lay dying, trying to revive himself while his partner in crime was outside the compound and doing her best to come to his aid quickly. On the final turn before he gave up the ghost, she made it!

Only now they had a raging worm queen, the head guard, and a hulked up super guard ready to kill them. They were 1 HP away from a total party kill. But they pulled through.

In the end, they raced away from the worm, ducking and dodging the exploding machinery and as the timer ticked down to 0, a final NAT 20 was rolled and one player was able to save the other who had failed and given up hope for survival!

All in all, the ending was EPIC and I do not do my player’s adventure justice with this retelling. They were amazing!

https://drive.google.com/file/d/1DieXmtFe0z0RQPTqDkZ3DOAN4-dberBx/view?usp=sharing @fancyscrams @gh0sth0rse @inorganicstream You should be able to view this PDF. Let me know if you can’t – > this is the ‘primer’ for the adventure with your character creation instructions along with some mechanics I want to test to possibly improve the speed of an on-line game. I’ve got room for one more if anyone else is interested. I’m going to start work on the maps. Shoot me a message on here with any…

As a side note, I tested @BigGrump’s House Rules and hacks for Armor, Supplies, and other things. Those hacks were very easy to incorporate and it actually smoothed out some of the kinks I had in the story. For example, the ability to convert Supplies into general items was really helpful to get explosives into my players hands when they didn’t really have time to investigate and find the dynamite available in the map.

The Armor hack also saved one of their lives too! By burning the armor, they were able to keep standing and the fact that their armor was destroyed in the process just bumped up the sense of dread and will to survive even further.

I’d highly recommend others to play with them as well and see what they think of them.

I sadly did not get to run it last weekend. So I’m very glad you did.
It seems my middle aged gamer friends get tired at 8:30 pm after walking up and down for 7 miles of a hill side town. Who would of thunk it.

That’s so rad! The figure flats look killer. The one thing I’m struggling with on VTT is the adjustable nature of a game mat or a roll of white paper for ‘off the rails’ adventures you can get into in a face-to-face session. Your write-up just reminded me about that a little more…

Glad you liked the rules. The armor one really sped up combat for us at our table. Supplies are still a theory on my end; I’ll be able to provide input after the weekend

I sadly did not get to run it last weekend. So I’m very glad you did.
It seems my middle aged gamer friends get tired at 8:30 pm after walking up and down for 7 miles of a hill side town. Who would of thunk it.

Sorry to hear that but no worries @Paxx! I’m sure you’ll get another chance and I’ll be looking for your feedback when do. Otherwise, I hope you enjoyed the trip and getting out of the heat. I can relate because I’ve been really grateful for the cool down that’s happening up here in Utah.

Oh, and Happy Cakeday! Hope it’s a good one!

That’s so rad! The figure flats look killer. The one thing I’m struggling with on VTT is the adjustable nature of a game mat or a roll of white paper for ‘off the rails’ adventures you can get into in a face-to-face session. Your write-up just reminded me about that a little more…

Glad you liked the rules. The armor one really sped up combat for us at our table. Supplies are still a theory on my end; I’ll be able to provide input after the weekend

I could see that @BigGrump. I’ve been hesitant to get into the VTT world, personally. I’ve been tempted because it might be a chance for me to be a player instead of GM for once, but there really is something visceral about a face-to-face game.

As for the rules, I think they’re a great option and I can only imagine what they might turn into with more play testing and developing. One of my players took full advantage of the supplies option and made sure to buy some extra before heading on the adventure proper. The other completely ignored supplies and missed out on some opportunities. Let me know how play testing goes!

Sounds like you and your players had a great time. I enjoyed hearing about the exploits of your players.

@BigGrump those house rules look awesome! I love the idea of treating HP as stamina. I’ve been kicking around similar ideas but I think I’ve been trying to over complicate it.

Glad you found this post. 2019 is a LONG time back! The main reason we started using this was to speed up fights by using an economy to change a failed roll to a success. Even though this made your health lower rather quickly, it was mitigated by the burn mechanic on armor points. All of it – including the supplies – gave each player more to do and think about on their turn. They felt more in control of the narrative. It was easier too than having to look at abilities or spells and decide which one to use. It also gave them the ability to heal up quickly by using their supplies after the fight ended. But pretty soon you began running out of supplies, armor points, and health. You start looking through the room more for supplies rather than loot! It takes a sec due to the supply options table for players to wrap there heads around it but the rest of it is pretty straight forward and easy to use.

It sounds like a blast! I love the idea of burning through HP, Armor, and Supply to speed up the combat and up the intensity. I’ll have to give it another look because it sounds like there’s a lot more to work with than I noticed at first.