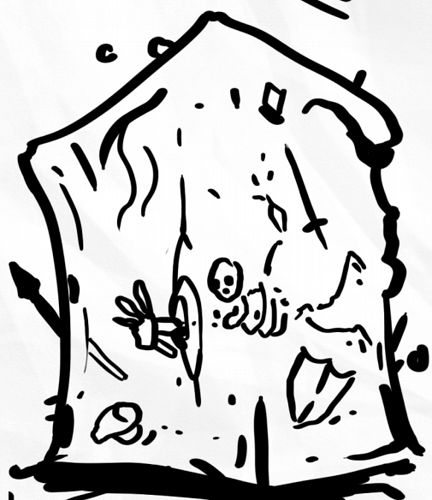 I finally made my own little brew of an encounter that I am quite happy to share with you guys.

A little Background Information, we are in the Underdark and before our Heroes lies a Maze and as the title already says “Slime Cubes”

Effort Vs Target and Hearts.

Timer - <–Start at own disclosure
Slime Hunting, D4 for Narrative distance
4 You can hear it
3 you can see it, far
2 closing in
1 melee range
0 ouch time

Effort (Target 10-13)
4 Crossroad, navigation check Hard
5-6 Simple paths, does not always have to be bad

find a Room, freeze timer and reset on the next path.
Reward players with Smart Navigation Ideas on the path with Easy checks (First would be, a torch to light the way)
Per

Rooms, use random or as you see fit

1 A Corpse and his gear is melted, some Basic Loot maybe (Before any effort use this room, foreshadowing)

3 Dead End, Slime coming from behind, corners players. Anyone hits it, will split it. Weapon used will be destroyed (Acid). Slime will regenerate T1000 style

4 A slime Pool, spawner, D4 Slimes per round

The whole maze will be run in Theater of the Mind, the mechanicals I am happy with, the details will come in the spur of the moment.
Failing Forward with High target and hopefully some clever narrative will give my players a feeling of being lost, but still making process.
Constant Slime Timers will hopefully keep the pressure up.

After this Room there will be the big finish, my players will stand before a great Slime lake that blocks the path, something is merging … from behind more slimes… Will they pass before all the slimes combine in the ultra mega Slime.

Note, this Encounter is untested, coming Monday I will get the chance to play the session.

I Hope I can report on the success or failure, either way I will learn something

P.S.
I use following Target scaling

[EA41FE31-858D-4BF1-9084-0DCAE4B7D8C6] So leading on from my previous post about hearts and damage reduction, our brainstorming lead us to thinking of hearts as a universal modifier for a lot of things, the question this time would be… can you use hearts as a target modifier? For example, you set the room target 12, so any action or tasks in that room would need to beat a 12 to succeed, usual stuff we’re all familiar with. Now what if you encounter an Agnar in that room, could you use it’s :he…

Treatet the Maze itself as if it where a Monster.
It has HP, it has Attacks in form of paths

it has its Minions for Pressure.

What I decided to go with was gelatinous cubes are the cleaning system. Attracted to fire, and get charged up by electricity, move at 10 feet per round, take no damage from small arms (knives, swords, maces, spears, bullets) do take damage from magic, but not fire and not electricity. Electricity increases hit points.

What proceeded to happen was the players shot at it, shot it with an augmented lightning bolt and then ran from it the rest of the 3 hours. At no time guessing it was attracted to the fire of their torches.

They had dynamite. Could have put out their torches…

I had thought they would probably dispatch one or two of the cubes while exploring the area…with a cube respawning every time one was destroyed. It never went that way…but everyone had a great time.

The other thing I had going on was that this was a level of a living dungeon. Quite a few novels on the topic…fun concept for a game.
Living Dungeons want to kill outsiders to gain power, but once they are intelligent enough they learn they can gain power by attracting more powerful entities and kill them. And after that they learn they can bribe people to make them more powerful…

In essence the dungeon is an entity that runs and powers a magical environment that feeds on something outsiders have and adventurers have in large amounts.

And dungeons hate other dungeons.

This kept a story going on in my head, 2 dungeons fighting each other, while players influenced others around them by their actions. And kept everything entertaining for everyone while I as the GM had clear ideas of the motivations of my NPCs, while never knowing where the story would really lead.

So we played today, not really much that I can add to it other than it worked really well.

Keep the Naration going, give them a feeling of running in Circles.

I just kept it going rather than counting of the Hearts, more in the spirit of, “as long as we are having fun why not just go with the flow”

Encounters in the Path and the rooms to discover, just go with your gut feeling. I startet with throwing but then just went for what felt right at the moment.

More Rooms and Path encounters to add more diversity.
Possibly drawing the maze as go could add some fun

I think next time I will use the Base of this to create a Magic Maze with some time bending encounters, ever changing walls and David Bowie…