Show off your crafts!

I know we have some hobby crafters in our number.

What are you working on? Finish anything cool recently? What are you excited to get started on? Show and tell in the replies!

I’ll share mine. Moved to a place with a big pillar where a seasonally festive tree would go, so I made it into one… 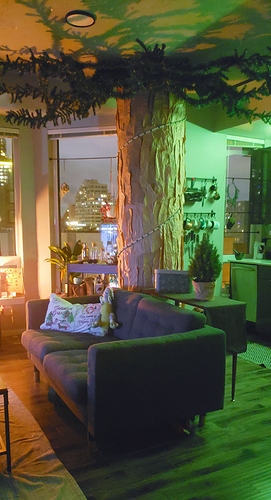 I have been working on an easy-to-craft dwarven aesthetic for my current ICRPG Alfheim campaign, where a clan of dwarves inhabits an ancient outpost in Iradrum, in the rolling hill country well south of the Kinder Mountains. I wanted something evocative of the general normative conception of dwarven culture that wasn’t too much like the Mines of Moria from the Tolkien books. I imagined that dwarves far from their mountain home would seek to build mountains of their own, so the buildings I designed featured efficient natural cobblestone and a metal-clad gambrel roof with knee walls (or no walls) taking the eaves straight to the ground—giving them a “mountainous” profile. They feature defensible doors and few windows, evincing a feeling of indestructibility and security. They are solid surface structures, but—you know dwarves!—they certainly contain portals to subterranean levels far below… 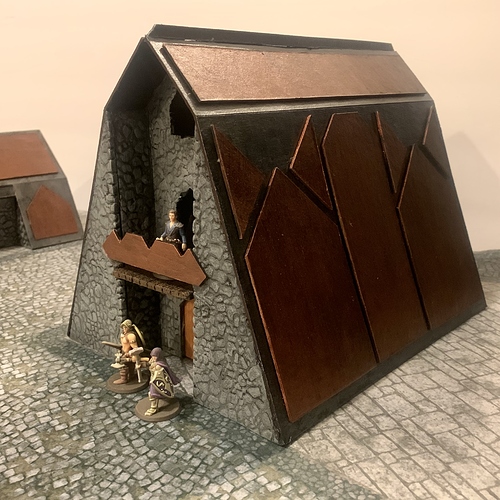 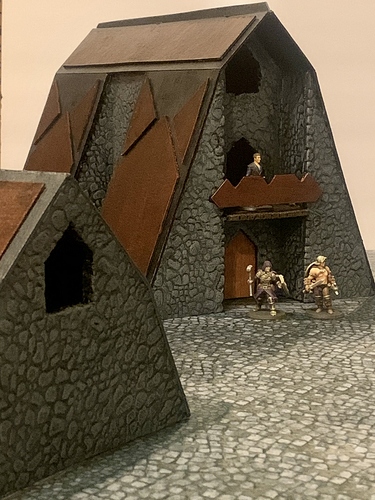 They are crafted from dollar store foam board and chipboard (and very little else); I am currently working on a set of three ancillary dwarven buildings that nest inside one another for easy storage. (The smaller building pictured here fits inside the larger stronghold.)

These look awesome! Love the balconies. Good for hijinx.

Fantastic idea, my kids want the same but there is no pillar in my house :). 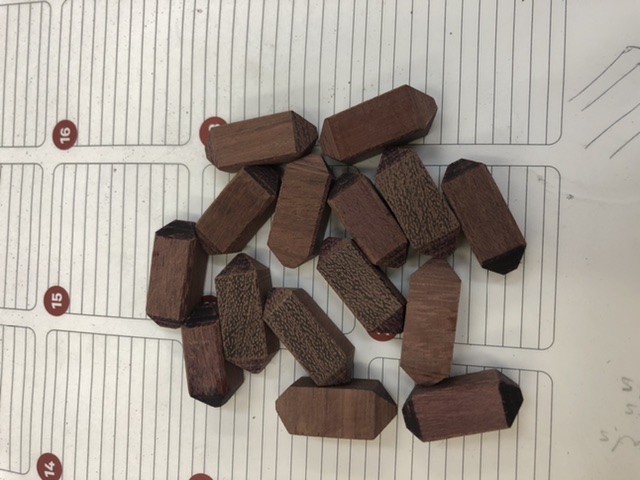 Trying my hand at D4 timer dice. These are made from scrap wood. I am going to use a drill press to make the pips.

I want to paint the pips in a contrast color but haven’t quite figured out how to do it efficiently yet. 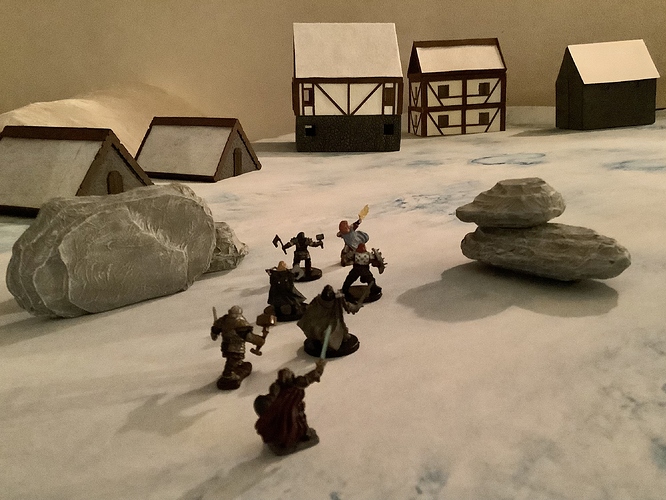 For my special holiday ICRPG one-shot in my version of Alfheim, a weary party of dwarven adventurers enters the remote village of Whitethaw high on the northern slope of the Kinder Mountains. Scratched into the standing stone at the entrance to the town is its motto: “United against the storm, the cold is our only enemy…”

My opening board isn’t precisely “index cards,” but it’s definitely the ICRPG DIY philosophy applied to fully playable 3D terrain: simplicity, versatility, functionality, modularity, and priority on the narrative. For example, most of the roofs have removable panels, so the snow can be replaced with sod, thatch, or shingle panels, and the floors of the larger buildings are detailed playable surfaces that index to stack for multistory structures or stand alone. The bastle house (far right) is magnetic and converts from a stand-alone into identical halves that can serve as facades to line a city street or town square. 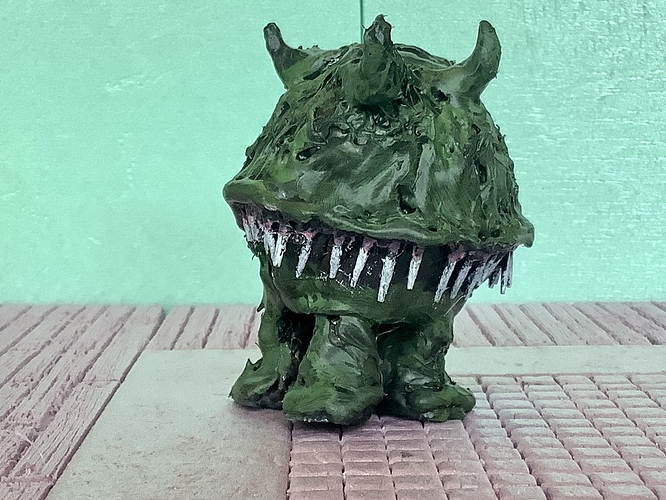 A hasty DIY agnar miniature from last summer, sculpted from 100% hot glue over an a ping pong ball armature built out with bits of tin foil; the teeth are toothpick tips. I’m working on a new one, better crafted but still based on this proof of concept… 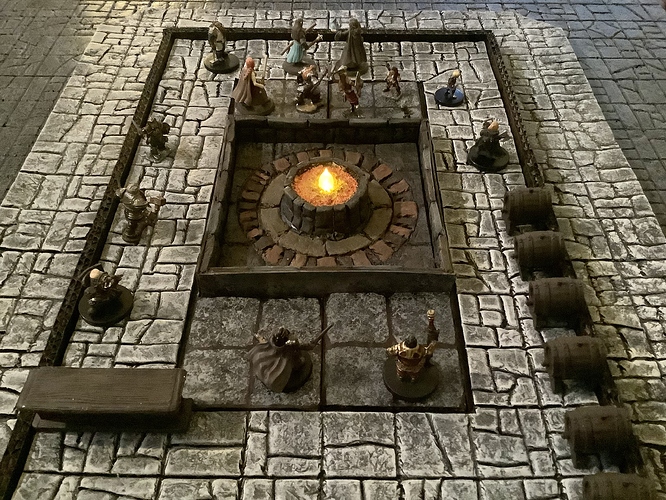 Deep below the dwarven stronghold in one of their great halls, an adventuring party comprising humans, halflings, an elven priestess, and one goblin foundling mingles with the hosts over a sumptuous feast in celebration of the brave deed to be undertaken the next day: a dangerous trek to re-open an ancient mine sealed off for more than two hundred years, reclaiming the valuable territory from foes from the Underdark…

(I trotted out some of my older crafts in a hurry to prepare for last night’s game session. Virtually everything on the tabletop was constructed from corrugated cardboard and dollar store foamcore. The concentric rectangular zones are nesting modular pieces to allow me to change up the board with inserts or drop in dungeon tiles (like the 20x20 tea light brazier) of similar construction. The stone floors were randomized and carved square by square before a three-stage drybrush.) 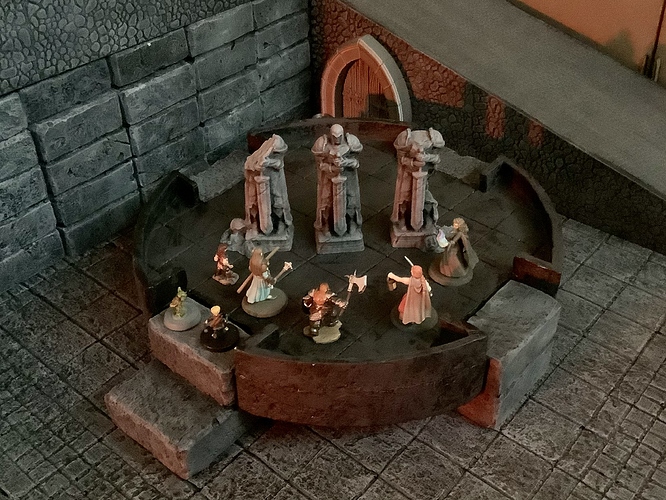 A mysterious shrine deep in the ancient dwarven mines on the way to the Underdark, where the party stops to decipher the inscriptions on the statues and solve the riddle that leads to a secret cache of useful loot.

The walls are my version of the Black Magic Craft dungeon stackers.

The board is my extra large (24”) implementation of PDM’s Ultimate Dungeon Terrain zoned gaming board concept, carved out of a piece of 1” XPS foam.

The dais is a round (10”) room-sized magnetic XPS dungeon tile pressed into service as a raised platform using some additional “mini stackers”. 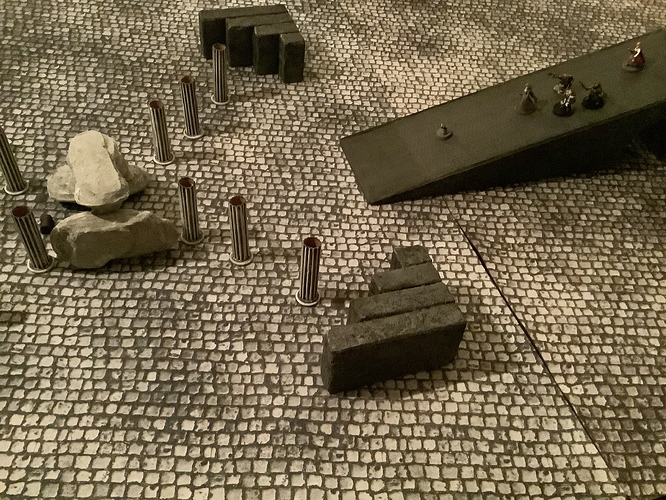 “Come on, guys! It’s totally not a kobold ambush!” 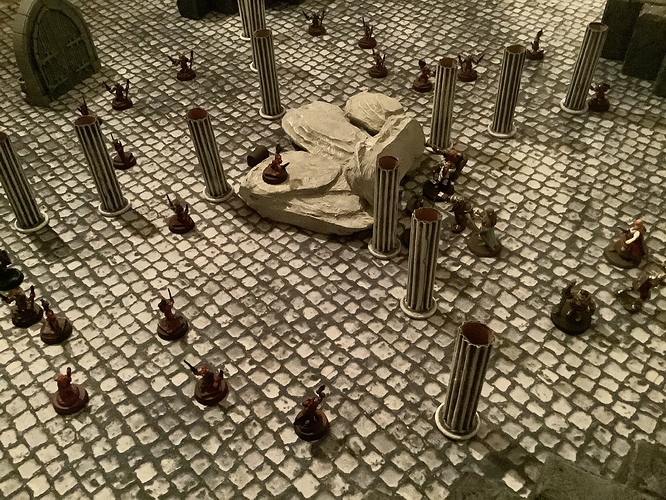