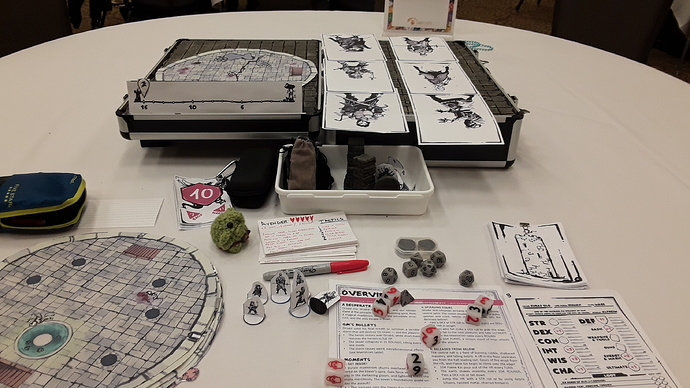 I just finished two days of running ICRPG at my local convention, SaltCon. I ended up running 6 games and it was an absolute blast! Most of the players had some knowledge or at least had heard of ICRPG, but none had ever played before. I really enjoyed sharing the game and all games were fantastic! Below are little summaries of each game and maybe a note of something I learned from it all.

Game 1: My wife and friends who were attending the game with me, played in this first game to help get one last round of practice and work out any bugs in my setup. Luckily, everything went swimmingly and my prep seemed to have paid off. They worked their way down through the tower and made it to the threshold of the door on the final turn. As we reached the final round, the timer dropped to zero and the maelstrom released one final random effect, they were blessed with a free move, before the Avenger could swing its sickly scythe, to dive out of the tower and escape to freedom! This was the first sign that the Maelstrom had sided with the players.

Game 2: With three players facing the tower, one returning from an earlier game of Last Flight, things got started as you’d expect. They dashed through the tower facing challenge after challenge, but the highlight was our priest. There was ongoing spiritual reckoning as our priest came to terms with their god, Steve, and whether they could get through this crisis of faith as everything they did seemed to backfire. It even got to the point where they tried to convert the final Avenger to Stevieanity… All hope seemed lost until, again, the Maelstrom’s final effect came into play. An angel descended from on high, healed our downed priest back to full and which allowed them that one final turn in the final round to make it out of the tower alive.

Game 3: The next trio to face Orvald’s Tower was absolutely on fire! Their roles were hot and my timers were giving them all the time in the world as I consistently rolled 3s and 4s. They were also blessed by some of the best loot rolls I’ve seen. Not only did they find a bag of King’s Coins, but they also stumbled upon a Feast of Kings in the penultimate room, healing the entire party back up to full for the final confrontation. Their luck did start to dry up in the final few rounds, but with those extra hero coins, they pushed through their bad rolls and made it out together. Again, the Maelstrom only had a few chances to shake things up and even then, they dodge all the really nasty ones that could have changed the course of the game for the worst.

Game 4: The final venture through Orvald’s Tower, I took on a fifth player who wanted to jump in one more game after playing in Last Flight as well. The party had an interesting dynamic about it. Our scout, hunter, and shadow raced ahead to explore and see what was up next. But they moved so quickly, that by the time the enemies arrive they had already moved past. That left our priest and titan to deal with whatever turned up, which added tension because those who had gone ahead needed to choose whether to retreat or press forward knowing that time was limited (they choose to retreat and help the party

) The deciding factor of this game was actually scrounging for loot. They spent nearly 5 whole rounds all gathering loot in the treasure hall before finally descending into the final room. The last piece of loot that was found, as the last player stayed one extra round to search found a Crystal Scatter Prism, which triples and refracts any spell. This came in handy as they only had three rounds remaining in the final room.

With the prism and some high damage rolls, they were able to blast away the Avenger in a single round! Before it could even react to the players

. The world timer dropped to two and then Maelstrom then turned up. In a climactic moment, time bent and push the timer down again to one. A final round and 2 crystals left to be destroyed. The prism came out and they destroyed the final crystals, broke open and every dashed to safety as the tower vanished! If that final player hadn’t stuck around for one final turn to get some loot, this would have been a very different story.

Doomvault was an exciting tale and the team ventured into the depths. The first challenge was the Invincibles. It took them a few rounds to figure out that they couldn’t be damaged or hurt, even though they knew they were called Invincibles. We also got to see the beginnings of what luck our portal mage would have throughout the whole game. I was worried that having a portal mage would allow them to easily skirt challenges, but the dice said otherwise. Low rolls cost them hero coins, but they were able to make clever uses of the portals for short effects, but the rewards came at a higher price than normal and the party felt it.

Eventually, they made their way to the final ritual and the timers were not kind. Only 1 round until the ritual was complete and a 2 HEART crystal needed to be broken. They pushed it all the way to 16 but had spent all their hero coins and couldn’t quite make it, which meant the ritual was able to execute the three kings of Norburg…

But rather than losing hope, they steeled themselves and determined that if they couldn’t save the kings, maybe they could save the world and fight Ogdru back, which they succeeded in. Unfortunately, in the battle our portal mage was hypnotized and while the rest of the party broke through the metal grate to safety, our mage flung himself after Ogrdu only to snap out of his trance to realize what a terrible mistake he’d made. The session ended as the three other players trod water at the surface and our portal made drowned deep beneath the wave, having dropped to dying after diving into the pit. This was the only death of the convention…

LAST FLIGHT OF THE RED SWORD

The Last Flight was another highlight of the convention. A full party crept aboard the ship and immediately meshed as a team from the very first round. They surprised me with how quickly they dove into their character and team dynamics that I awarded each player a hero coin that very first round! It was awesome. Their first interest was the explosives that lined the ship and they spent some time detaching a few bombs before moving on. Our robot, M1RF remained wired into the terminal in the loading bay the entire game, hacking into every system and rerouting every transmission, His effort allowed the team to discover the Reptoid’s plan, the Dark Star, what happened, and even adjusted the air conditioning. I’ll get to that in a second. The rest of the team, after seeing the scratch marks on the door to the bridge, backed off and went to the Med Bay instead where they faced down Gargantua! Our gunner and our ghost goaded the creature, whittling away at its health until the thing blasted a hole in the ship, narrowly missing the crew’s pilot and destroying the door to the Science Bay. Eventually, they were able to kill the thing out in the hall right as they discovered the need to overcharge the engines and initiate the jump into the heart of the Dark Star.

Surrounded by reptoids they initiate the maneuver and the ship begins to speed up. To aid in their escape, our robot turned down the air conditioning to point of freezing and reduced the mutant reptoid’s abilities significantly. With a lethargic pack of reptoids chasing them, they ran, jumped, and dragged their way out into space to be picked up by their Warp Shell. The final crew member was M1RF who said goodbye to Bethany, the terminal he’d gotten to know over so many cycles, and prepared to jump out into the vacuum of space. All needed to do was not roll a one and… he rolled a one.

BOOM! The explosives went off and out M1RF goes as a pile of scrap. Luckily the crew was able to snatch his core memory and they have plans to rebuild him.

In the end, running these games was amazing! I had so much fun sharing this great system with others and I’m hopeful that more ICRPG goodness will spread in my local area. One player even bought a hard copy of Master Edition while he was playing because he liked it so much. How cool is that!

What I learned was that preparation really helped. My supplies were just what I needed to set up and get moving quickly, but also that there was plenty of room to roll with the punches. I can’t tell you how often we got to have little conversations as GM and players to discuss how something might work or what made sense to them. We kept things light and that made a huge impact.

I’ve got a picture from each of the games. I’m sorry I didn’t take more of the in-game action. I was too engrossed in the adventures to think about taking a picture. I’ve also included a link to my video going over the kit that I took with me. I’m very happy with how it turned out and it really lightened my load as a GM because I had everything prepped to just pull out and get playing. 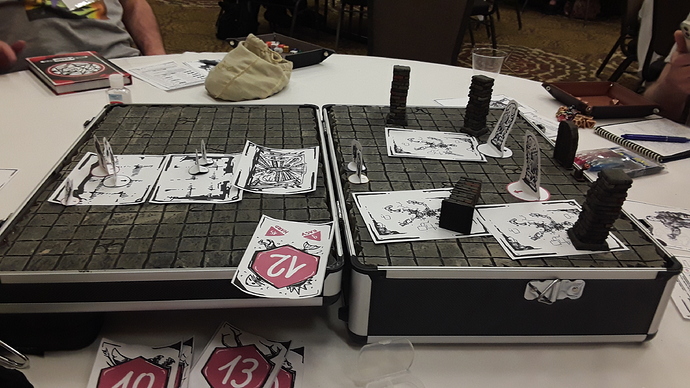 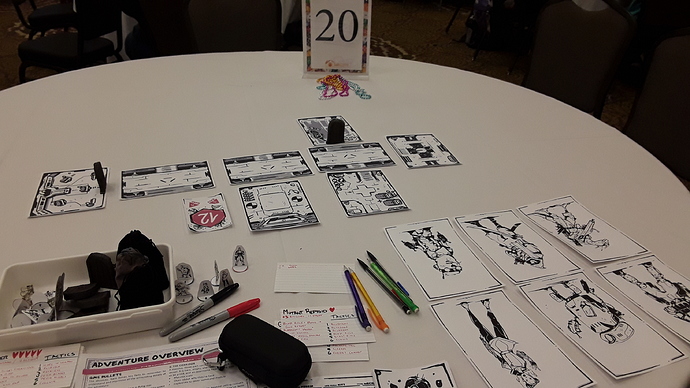 The preps are amazing! and the games look a real fun! Well done

Sounds amazing for the lucky few who were able to play!

That cool briefcase kit from the video sounds like it really paid off. Excellent report. Well done.

I was one of those Doomvault players and loved the game.
I have also purchased the Master’s Edition since the con.
Thanks for the introduction and making the game fun and easy to learn.

Woot! Glad you could make it to the forums!

That really was such a fun run through Doomvault. Love the nail-biting endings!