More tales from the table as we experimented with Casting Time, which turned out to be a real hoot. In the end, we had some characters casting spells as others protected them or maintained concentration. The casters got to unleash some hell with beefed up versions of simple spells when they were able to get them cast. Likewise, our frontline fighters used something similar for Weapon Arts to build up big attacks to unleash on scads of enemies.
Here’s what we did: 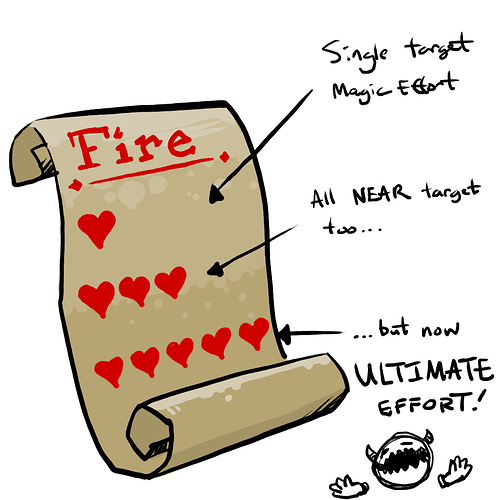 When a player wants to cast the Fire spell, they can instantly cast it, but if they want to pump up the Fire spell a little bit to deal with more enemies they begin to roll Magic Effort in between people’s turns and keep a running total. When they reach the amount of HEARTS assigned to the spell’s power level they cast the buffed up version of the spell! *Always between players turns, never interrupting. Now if a caster has this particular Fire spell they can take pot-shots if that’s all the time they have, but if their comrades are willing to protect them while they complete the Casting Time they can blow a hole in enemy lines!

You can assign a power level to any spell and when the caster fills up the HEARTS with Magic Effort the spell goes off. Pretty simple, and it gives the person casting the spell the feeling of actually casting a spell. How does this impact game play? Here’s what we found when we tried it out:

This needs a lot more play testing to find a balance, increase the spell list, and explore more ways to shape spells, but we had a blast testing out Casting Time. I was inspired by the tiers of spells from Final Fantasy games like the Bolt 1, Bolt 2, Bolt 3 progression, and also a concept Hank reminded me of in a podcast episode a while back: the real currency of the table is the time you spend at it. I wanted to leverage that for spell casting.
What does that mean for the table?

Like I say, it needs a lot of work, but the initial findings at my table changed the dynamics of play and solved some of the things that irked us about ttrpgs (per day abilities, I’m looking at you). Thoughts? Post 'em!

Weapon Arts kind of worked the same way with smaller scale for HEARTS since Weapon Effort is smaller, and when you’re a weapon wielder you’re more likely in the fray. Weapon arts were things like a piercing shot for a bow, a thunderous stomp that knocked enemies over in a cone, or a whirlwind attack.

I suppose you could incorporate the same thing for technological implementations like air strikes, satellite beams, and other cool sci fi stuffs.

This is an interesting read.

Can the players get interrupted during their casting similar to DnD’s (and probably other system’s) concentration?

I think this approach is sound.

I especially like the variable amount of “delay” which is based on MAGIC EFFORT, instead of flat ROUNDS (like each upgrade takes one ROUND longer no matter what). This creates tension around those effort rolls, which is super nice.

This makes points put into MAGIC EFFORT very valuable like you say. This is good, or bad, depending on your point of view. If you want to emphasize a divide between ‘pure’ casters and dabblers, this will make them even more separate. However, if you like that even the untrained people can attempt something that requires expertise and occasionally succeed, it may not be that good.

There is another issue with this mechanic. This is kinda incompatible with the spells in MAGIC and therefore in my book. Spells already have power stages that basically do the same thing. The cost isn’t time, it is the sacrificed HP.

Having said that let me make a house rule to mitigate that: Casting a spell at a higher power for free takes one HEART of MAGIC EFFORT per POWER.

I’m not sure why you mention limited spells per day. ICRPG has no such thing thankfully and I’m no fan of it at all.

Also you said the effort rolls are made in between people’s turns, so do you mean each turn? That’s too fast I’d say and maybe too much rolling.

Like @Cherique asked, can the caster be interrupted and how?

According to your explanations, it is obvious that you are not using MAGIC book. May I ask why?

Sure can, if you want. Instead of losing the spell we just dropped a HEART of effort. When hit we made saves against the TN and either kept casting or lost a bit of progress and kept casting.

I mentioned spells per day just as a reference to common “fixes” and restrictions in other RPGs. I’m glad ICRPG doesn’t have that stuff or I wouldn’t be as down to clown with it as I am.

You’re right about the disparity between casters and non-casters: when you have designs that allow for specialization it definitely shows, but I don’t think that’s a bad thing. The more you put into a character’s development and build over time the more it should reflect their accumulated ability.

I did have players rolling in between turns. We actually tested Int/Wis/Cha Effort to distinguish between different methods for casting, and we based it on Basic Effort since before nobody invested in basic effort. But for this discussion I just used Magic Effort. Rolling every turn kept the caster engaged and watching the action, as well as not tying up several rounds into the casting. The battlefield would shift subtly over the course of the taken turns, but it wasn’t too dramatic or delaying their play. After all, spending several rounds to cast a single spell is pretty rough for the person waiting for their spell to go off. Rolling every round gives incentive to invest into your core spell casting ability, whether it’s Magic Effort or Int-Basic Effort.

As far as using the Magic supplement goes, when we started the campaign out we just got the core book and it was before Magic came out. We decided on a low-power kind of setting initially to test the system out in a short story arc; big magic didn’t have a place in this game. After Magic came out we had a look over it and didn’t really want to introduce it to the game. Narratively it didn’t fit well, and players didn’t want to shift around their designs, as well as the feel of the game. The party also didn’t like the way the magic system worked, so they weren’t crazy about putting it in there. So we just kept playing the way we initially started and expanded, tried more DIY elements, and have been tinkering to find what we like. In the end they wanted to use Savage World’s because they wanted to min/max and have more established material. After the campaign is done, I’ll be dropping that system altogether, haha.

I love this idea. You’re on fire with cool ideas! I could see this working as an alternative for EASY and HARD.

Fighter: “I leap into the mob of mooks and attack as many as I can. Can I hit all CLOSE?”

GM: “Yeah you can with one HEART of casting time with WEAPON EFFORT.”

It also makes seating order more important so casters have time to unleash hell before the baddies go.

Thanks! I’ve been doing a lot of home-brewing and would love to make little write-ups for my hacks, I’ve just never made up a PDF before. I should take this opportunity to learn, haha.

Yeah, I’m one of the naysayers who’s not a fan of losing hearts for casting either.

I actually dig HP as a cost for powerful spells, like the force of the magic channeling through you is tearing at your body. I like that for world altering magic, epic magic that takes a toll and has a real price. Imagine a spell so powerful, ancient, and arcane that the cost would be a permanent HEART that would be a magical scar on you. I might be more open to extremely powerful magic with costs like HP in various ways if I played with that kind of magic, but I usually focus on more small-scale “practical” magic, to evoke a term from Dark Souls.

I like HP-for-magic, but I’d also love to explore a more “conservation of energy” type of system for magic.

I don’t think I want to go so far as to say “magic must follow the laws of physics” but I’m leaning in that direction. Matter can’t be created or destroyed, so a “create water” spell would re-assemble nearby matter to create that water. It looks to the characters like water just appears, but that’s because they don’t see the atoms being taken from nearby things…

I think there should be some in-world cost and consequence for magic, even if it’s vanishingly small for cantrips and low-level spells. Building an army to conquer the neighboring kingdom takes raw matter for arms and armor, plus all the food and provisions and supply train logistics. Casting a spell to accomplish the same goal should have some similar real-world implications in my mind.

I’ve never had a character or player get that high in power that I ever had to figure it out, though!

@Skippy, have you ever heard of Patrick Rothfuss’ Kingkiller Trilogy? They have a system called Sympathy that plays with that idea of following the laws of physics and conservation of energy, but not entirely. Could be a good jumping off point, maybe?

I love Rothfuss’s books! Those really helped me clarify my own feelings on the matter, seeing an author really play with those ideas in complex ways.

I don’t want to neuter the power and mystery of magic, though, because that’s also fun and rewarding. Just something I keep noodling on.

You know what? I’m stealing the essence of this… For every round you take in combat, you can raise the power of a spell. If you are hit, or your concentration is otherwise upset, you lose the spell. I’ll have to think of way to handwave people from doing this for out-of-combat applications…or maybe not since in a sense the pressure in ICRPG is always on, turns are always counting…

Its simple, its elegant, and it asks the PCs to gamble…liked.

(My only other real magic homebrew is I let Mages use expensive arcane reagents & components in place of hp–at the same cost though–so far so good, when coin is flowing they use these reagents, otherwise they burn themselves up a bit).

One of my favorite of all time anime’s is Slayers. In that the main character Lina Inverse has a huge spell that kills just about anything and levels towns while it’s at it. When she uses it though theres a long incantation she recites. More powerful spells have even longer incantations. https://youtu.be/r1U9ESUBpmA

It always seemed so cool and I always wondered how to get the essence of the incantation in game. I think you found the answer. On the roleplay side it would be fun if between turns the spell caster rolled to increase magic effort and recited a line of an incantation. It might also create the feeling that things are happening simultaneous.