Distances in the Worlds

On the Worlds map for Alfiem (at least the old copies) there is a rough “50 mile scale” on the lower right under the compass rose. I keep this as a VERY rough guideline. Going with this the main continent of Alfiem is ~650 miles wide from Khett to Dur Moro

The Wizard’s Lock is the distance, my friend! o7

Thank you. I will take that in to concideration. 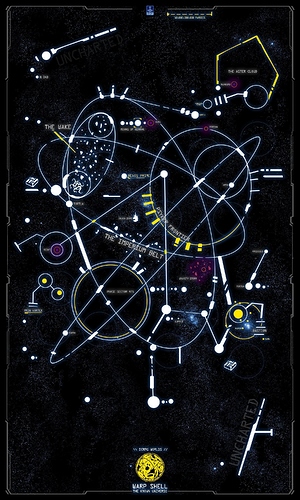 If you assume Urth (NE of the Psyker Frontier) is the same one that Alfheim is supposed to take place on (I think its fair to assume all the Worlds to be in the same cosmos as each other) then you can measure how far it is from there to some of the other worlds mentioned in Warp Shell, but it’s a setting that ranges all over the place and isn’t contained to any one particular world.

Ghost Mountain is set on Earth (in the bottom SW corner of the map) as are Beneath the Door, Bearcats, Vigilante City, Blood and Snow and some of the other microsettings.

Viking Death Squad is set on a planet they call Urth, but it’s clearly our Earth just 8000 some odd years in the future. It’s unclear if the current iteration of the game is intended to take place in the larger Warp Shell universe (or Runeverse). It used to. A version of it is mentioned in the Worlds book on page 79 as a Warp Shell adventure with the Immortals being creations of Azatoth. The current version feels like it’s been broken away from being strictly set in the same cosmology–but they never say it isn’t. And there’s some strong hints (or at least Easter Eggs) that it connects maybe to Altered State (which is a collab project and itself may or may not be part of the Runeverse or its own thing).

Thanks to everyone that has commented on my post. I am an engineer and need to understand the distance between places when travel in a rpg. I an starting with a solo game in Alfheim. 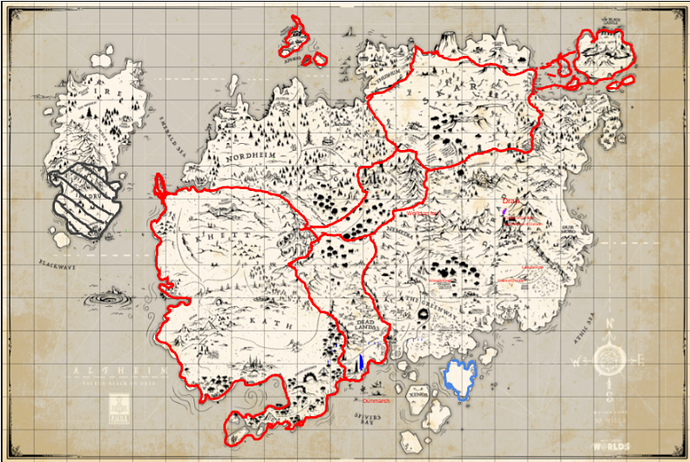 Disregard the extra red boarder lines as they are for our campaign.
This is what the Alfheif map looks like set up in 50 mi square grid (on roll 20) if that helps a little. This helps me get a rough idea of how long it will take to travel +/- road hazards.

This is extremely handy.

I’ve done some daydreaming about the geography of (my table’s version of) Alfheim for purposes of verisimilitude in game; at first it was surprising to me that, given a roughly Earth-sized planet with similar composition and periods for rotation and revolution, all of Alfheim fits within a single time zone.

I got to extrapolating. If what’s on the map is the extent of the “known world” of Alfheim, is it a single continent on a waterworld dominated by a vast and daunting ocean? Or are there undiscovered continents out there to find, making the setting ripe for the launch of a golden age of exploration.

As wonderfully full of open-ended lore Worlds is—making it very easy for you to find seeds for your own adventures based on starting points in the book—I like that there is still plenty of blank space left on the map (Crask and beyond…).

Here’s another brain wrecker as regards the Warp Shell map: Our Milky Way Galaxy is only 30,660 parsecs across. The line at the top of the map is TEN BILLION parsecs! That makes each dash across the top 125,000,000 parsecs.

So each of the little dashes that make up that billion parsec line is 4077 Milky Ways across! 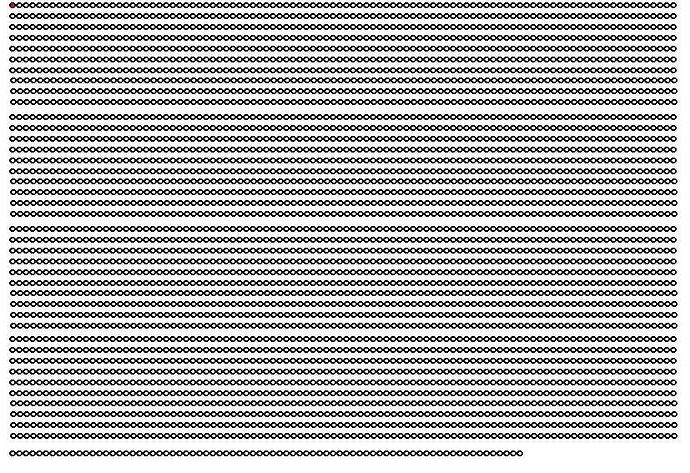 So what you said about how much bigger the map was than our observable universe was really interesting and got me thinking if there was a way to visualize that. Our largest all at once snapshot model of the known universe was done by something called the Millennium Simulation and it came up with a map about 21 x 15 billion light years. It’s that famous one that shows the structure of the larger universe as being textured like cheesecloth.

So I took that picture and shrunk it down to scale to get a sense of how much bigger the Warp Shell map is than our largest galactic model. And this is it: (It’s that mottled pink box around Earth down in the lower left) 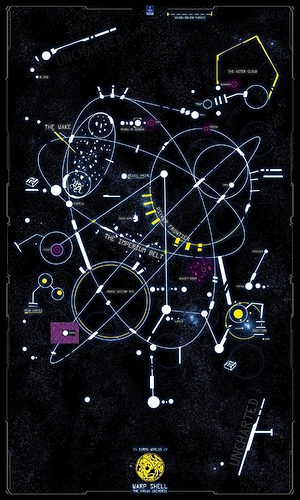 ok @Grimcleaver I think you win the geekout challenge I think was a separate thread a while back. But it made me remember I had used a similar cosmology model output as a basis for a tattoo design, because obviously the large-scale structure should be on your forearm for easy reference. 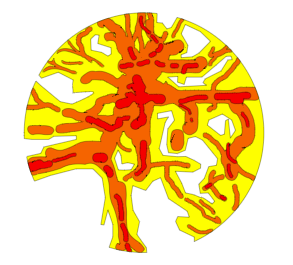 But then again, what about the other scale. Shouldn’t we have a setting in the quark-gluon plasma inside a single neutron? With the timer related to the decay half-life, encounters with passing neutrinos, and the probability of events built in. 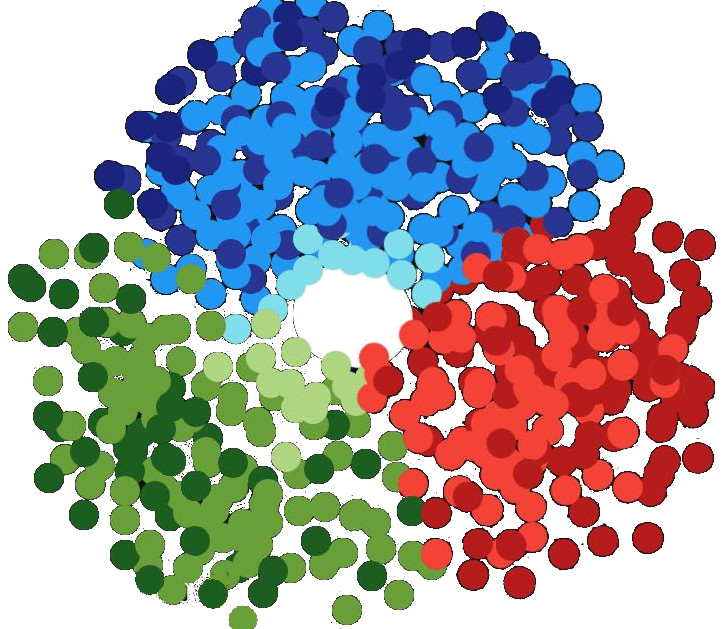