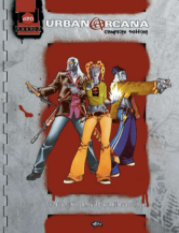 There are a number of modern weapon catalogs to choose from. In ICRPG they all do WEAPON or GUN damage. Explosives due ULTIMATE damage. Some HEAVY weapons like cannons, miniguns, and grenade launchers do ULTIMATE damage as well. See you GM for any questions.

ULTIMATE [d12] : Explosives, Grenades, Grenade Launchers, High Caliber weapons (greater than 30 cal). Anything larger should do a full HEART of damage per hit.

I would highly recommend the d20 Modern: Weapons Locker supplement for reference. ~Ezzer

Using the Tag system from Blood and Snow, create a tag for each Background, or use the list from the ones below.
Reference the d20 Modern rulebook or Modern Arcana for more on skills and training. The rule of thumb is a Training should provide a +2 bonus to attempts/checks.Some combinations should be allowed to make a check EASY. Especially when players are supporting each other with similar or complimentary skills.

Adventurer : +2 to STR and DEX Checks for jumping, and climbing.

Everyone starts with 5. After a die roll, but before the GM reveals the results, a player can decide to spend 1 ACTION POINT to add 1d6 to your attempt/check.

Any FX created using an ACTION POINT automatically succeeds. No casting roll, not target to hit, save succeeds, and there is no Fx Burn.

Use them or lose them, as the old saying goes.

Your GM grants ACTION POINTS as a reward for clever plans or good role playing during the session. Don’t forget to use them before the end of the night.

Target gains ADV from hard cover like stone, steel, vehicles, or buildings. Anything that would typically stop a bullet, or can cover half the body, counts. When in doubt, ask your GM.

If your Hit Points equal 0 or less, or you take MASSIVE DAMAGE, you are disabled and can only take a CLOSE MOVE in your turn. Roll 1d4 to determine the amount of rounds you have before you die. RECOVER on your next turn, or die. Rule #4 “Don’t Die on Me Man!” is still in effect per pg. 20 ICRPG CORE RULEBOOK.

When a monster attacks, the player makes a DEFENSE check vs TARGET and adds their DEFENSE. Sometimes DEX bonus may not apply. See your GM for more on DEX bonuses.

FX, Class, Loot, Cover, Tags, and Size modifiers are all factors that can modify your DEFENSE.

Bypass a casting roll to guarantee success, but lose the use of the FX until you complete a FULL REST (1 turn in DAYS/8 turns in HOURS). Spending an Action Point to create an FX ignores the FX BURN rule.

FX powers that do not require any magical talent are called Incantations. Simply speak the words, make any necessary movements, and pay the required materials. But they can have terrible consequences when they critically fail. Attack, Augment, Betrayal, Damage, Death, Delusion, Falsehood, Hostile Spell, Mirror Cast, and Reversal are just some examples.

Roll INT or WIS against the current ROOM TARGET. If you fail, try the exact same cast on your next TURN with an EASY roll. Any other action negates this effect, as you have lost your focus.

SELF : Can only be cast on the caster
SINGLE VISIBLE : Any ONE TARGET the caster can see
SINGLE TOUCH : A single ally or enemy touched. If an evasive enemy, may require DEX roll to touch
RANGED ATTACK : Treat as bow or gun shot. Roll DEX
SINGLE CLOSE : Melee range, or less than 5 feet
SINGLE NEAR : Target any 1 being within a quick sprint
SINGLE FAR : Any target within a ‘double banana’
ALL CLOSE : Everything within arm’s reach is affected
ALL NEAR : Everything within a stone’s throw, that’s a stone not a rock.
ALL FAR : A huge area, with a FAR radius is affected by this SPELL
ALL VISIBLE : All the caster sees is subject to her power
ALL IN EARSHOT : Some SPELLS use sound, target all that can hear you
A MATTER OF MILES : This SPELL has such immense range it is almost infinite
RANGE AT LOCATION : Cast this SPELL within a given range, and measure an area from there
ALLIES ONLY : As above, but ignore enemies
ENEMIES ONLY : As above, but ignore allies

INSTANT : The effect is instantaneous, and over in a split second
1 TURN : When the player or GM after your TURN, is done with their TURN, the effect ends
1DX TURNS : Use any die, count your way around the table, then end the effect
1 ROUND : At the beginning of your next TURN, the effect disappears
1DX ROUNDS : Use any die. After that many of your TURNS, at the beginning of your TURN, the SPELL ends
UNTIL TIMER : When the current timer rolled by the GM expires, the SPELL dissipates
FUSE : The caster sets DURATION, within maximum given
HOURS : A trip by horseback, night of camping, or long walk in the woods
DAYS : Use a die, GM ruling, caster roll, or caster decision to determine
CONCENTRATION : The SPELL lasts until the caster casts another SPELL or takes any damage
PERMANENT : This SPELL never dissipates unless COUNTERSPELL or other removal method is used.

Create your own d100 table of magic and tech. I would recommend any of the d20 Modern books.

This type of loot is typically magical items or weapons of some sort. Most FX Items have a single command word. Activating FX LOOT is a FREE ACTION unless the item description says otherwise.

Hero Coins are spent to grant ADVANTAGE, or REROLL, to any single ATTEMPT. You can only have 1 HERO COIN at a time. It can be combined with ACTION POINTS.

Any damage inflicted with anything using the HEAVY keyword immediately causes you to begin DYING per the MASSIVE DAMAGE rules in ICRPG Core.

Damage greater than your DEF+CON, incurred in a single attack, cause you to immediately begin dying from your injuries. See DEATH & DYING.

Attacks add your STR bonus to your roll.

Attacks add your DEX bonus to your roll.

Once per turn, roll CON vs TARGET to stop the bleeding/dying, if successful, you pop up with 1 HP. Fail and try again to the next turn, if you have any more turns left.

Any of these organizations are good contacts for your characters. I would recommend everyone belong to the same organization but ad hoc teams are known to work together.

The root of all evil comes from our own world. A malevolent entity made up of madness, spite, death, and despair. It grows like a tumor in the world, living underground as a blob of dark black matter. Everything it touches is transformed into a nightmare. Everything we fear has the Dark at its roots. Being "afraid of the Dark" is a real thing. There are age old rumors the Roman Catholic church is responsible for letting the Dark loose upon mankind, before mankind knew what it was.

Yes, that Inquisition, is still alive and well. It keeps its membership secret in the hopes of rooting out evil within its own ranks if necessary. It battles the Dark’s forces with its holy soldiers and sainted investigators. A network of spies and support staff are embedded in governments all over the world. Notable members include Jon Wick, Ava Baptista, John Constantine, Mark Donaka, and Tom ‘Neo’ Anderson, and Benito ‘El Mariachi’.

"To doubt the Inquisition is to doubt the word of god." ~ Pope John Paul

A covert government funded special operations task force setup to monitor and contain any monsters from the Dark. Keeping the general public unaware and the danger hidden out of sight and minds is their number one priority. They are a limited group of individuals with unique sets of skills for fighting the minions of the Dark.

"Sigma 7 is who the Men in Black call for backup when the Dark hits the fan." ~ Seal Team Six

Mara Salvatrucha “MS13” is better known as a criminal gang organization from El Salvador. This is a ruse, they form a huge circle of mages who favor possession by demonic spirits. The tattoos the gangs are known for creating permanent runes on their skin to produce FX, and help keep the demons they possess, at bay. They fight the Dark using any means necessary, even using captured demons and devils against their will. A dangerous practice. No one knows their reasons, but having a demonologist on your side is something you do not question. The gang related crimes help hide their true path and create a network of street level spies in every part of the civilized world.

A non profit organization created by philanthropist Frank Day. He was a pharmaceutical genius with a hobby bent on the occult. He disappeared in 1972 but his Institute lives on with the task of discovering as much as it can about the Dark and the many impacts it has had on the Earth.

It is also used as a training ground for Sigma 7 agents. The FDI has many branches and organizations working towards its agendas in numerous governments and secret organizations. Some say no one knows how many pots they have their hands in, not even the Chairman.

The Men in Black, Delta Force, Navy Seals, Black Ops, Secret Service, and the CIA are all groups started, and some say controlled, by the FDI.

“Some say the Institute goes back as far as the Pinkerton Detective Agency. But those are just stories… aren’t they?” ~ Agent Unknown

The Order of the Cruciform Sword OSC

The Order of the Cruciform Sword is a covert Apostolic order built to support the Warrior Nun’s demon-fighting mission. The OCS is made up of Sister Warriors/nuns who fight alongside the Warrior Nun, despite their lack of supernatural powers. It is rumored the Warror Nun’s have an angelic halo gifted to them by fallen angel during the time of the Crusades. The halo is considered one of the most powerful supernatural artifacts in the world.

The following is under review and is located in my world primer database in Notion:
- SPELL FX
- PSI FX
- CONDITIONS