Thanks, though we weren’t the only two to contribute.

Thanks everyone who submitted and to those onlookers for their encouragement.

Hey Kane, I thought as an additional bonus to the community I’d make some of these tokens.
if you’ve like to add them to the set, lemme know how i can get them to you as individual images

Note: Some minor alterations to others art was made in the process of making them into tokens. 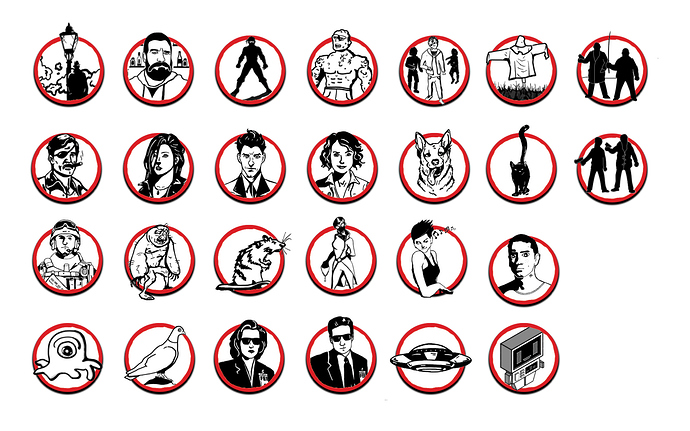 Ooooh these are fantastic! Yes, I would love to add them to the set. If you want you can private message me a link to a Google drive folder, or whatever is easier for you. I’m not picky haha

Well done, thank you all so much for doing these.

The tokens are super cool, they add a really nice touch to this project!

a little something for everyone

It looks like this discussion ‘went quiet’ in early June, and I just signed on for the first time. Are you still looking for contributions to this pack?

It went quiet in early June because we accomplished the goal of reaching 100 cards and producing a community made set of Modern Index Cards (here is the link to the thread with the completed project: SKYLINES: set of MODERN INDEX CARDS). That said though, if you do want to contribute, I’d be more than happy to update the PDF with any additional art

Oh and welcome to the Shield Wall! Hands down, one of the best (if not the best) RPG communities in existence and we are very happy to have you!

Also, what bike do you have in your profile pic?

I need more of that in my life.

I’m too busy to start a new project today, but I would very much like to contribute. Are there any rules/guidelines beyond ‘use the template’? (ie - brush usage etc)

Nice! I have a 1992 Suzuki DR650SN that is sadly gathering dust (needs some repairs), but I’ve been looking at getting a Royal Enfield Interceptor and would love to go on a long tour like that haha!

As for rules/guidelines, there weren’t really any other than using the template. We all kind of stuck with the sharpie look to go with the ICRPG vide, but other than that everyone was really at liberty to try things out and experiment. There are so many different ways you could interpret the “MODERN” theme.

And yeah, sadly, my Kawi is also collecting dust. For my day job, I’m a ‘mobile mapper’ (think: Google Street View) so for 5 years I was living out of hotels and couldn’t bring the scoot with me so it lived with my folks. She needs a lot of TLC to get back to road-ready status. sigh Some day…

Oh! Is there a list of the card topics that folks wanted but that never got done? Seems like it would be the best place for me to start once I have some time.

Some day… I know that feeling.

Anyway, this thread has a bunch of suggestions that you can look through.

MrLich, as mentioned this set was completed, but if you wanted to add more too it, i don’t think anyone would say no.

if you had an idea for a new set I would be interested in the motivation.

otherwise if you search tooth and claw, i created a small prehistoric set you can feel free to add too.

Well, I was thinking - that set was for ‘modern’ so I was thinking a bit about something related but adjacent to that - Urban Fantasy a la the Dresden Files. That way, it would prove beneficial as a supplement - not only as a ‘standalone’.

Illustrating traditionally fantasy monsters and mythological figures in a modern setting struck me as an interesting dichotomy.

Not married to the idea, and I’m still playing catch up with a thousand other things, but this seemed like some interesting territory to explore visually, and since there’ doesn’t seem to be a glut of content already out there…

Nice! I’m a truck driver by trade so this is definitely my favorite card.