I’ve never been interested in creating my own character sheet art - until I started ICRPG and saw the other character sheets being made! The bulk of the sheet was created with ballpoint pen and I’d like to revise it more digitally (Clip Studio Paint). There’s a lot of issues with it, like not enough loot spots, but it will be fun to watch it evolve 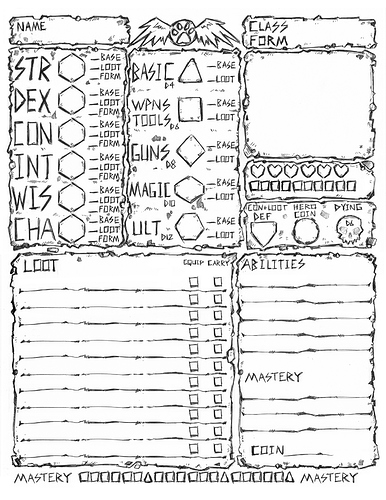 As one who enjoys having many character sheet options, this is rockin! Great job and thanks for sharing!

What are the triangles in Mastery?

I’m playing around with the idea of milestones or some other reward along the track, represented by the triangle. So the players know exactly when a level up of sorts is coming rather than when completing certain parts of the campaign. I think that would fit my group better. Getting a point or two along that track (along with nat 20’s) each session could also help. With the amount of game time we have, I think it would take several months to get the mastery track filled once, which wouldn’t be fun.

Rodger that!
It takes 5-6 solid sessions for one character to advance one level of mastery in my games. This is compounded by most of my players running two (or more!) toons at a time.
So I am working on a similar kind of thing. Something awarded at every game session, and once a character has three they can switch it out for another. Maybe awarded at the beginning of the next game session so the have a new toy to play that character with.
Anyway, super cool to see I am not the only one thinking this way.
Cheers!

More neat ideas! The whole advancement in ICRPG is really neat, and looks like there are many ways to adjust it to fit different groups. New toys are always fun

I always enjoy creative ideas to gaming made easier. Love it.