Campaign for Parthia in 361AD

Welcome to Parthia as Antiquity transitions into the Dark Ages. 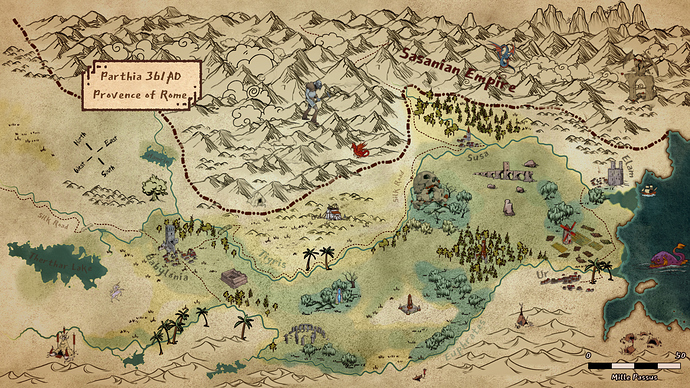 Our story takes place on one of the many Thousand Worlds that span eternity… The year is 361 AD. Emperor Constantius has fallen after 20 years of bloody civil war, the empire is in a poor state. General Julian, the Apostate has ascended to the throne, by his command the main force of the legion relocate from the boarder protecting Constantinople from the Huns to the Parthia province to haul the uprisings being lead by Sassanian king Shapur II from the east.

Magic runs foul with it’s chaos. The emperor has declared Magic illegal outside the legion. Witch Hunters relentlessly seek to crush those heretics who defy the holy edict. The people call them Grimscribes, creatures or men tattoo with spells, those who bargain with god’s for power.

Funds for the on going war are critical, and caravans have been going missing along the Silk road, near an outpost village named Susa, which sitting on the edge of the Tigris-Euphrates alluvial salt marsh (the ruins of the ancient Babylonian Empire). If news of the losses reach the emperors creditors it could spell disaster for the freshly crowed Cesare.

Your squad the Deathbringers have been quietly detached from the legion, an elite group of agents, sent in secret to investigate the disappearances.

Enemies of the empire are everywhere.

It is a really beautiful map! How is the campaign going?

start’s Thursday, got some classic room design and some maps i made for those too, I’ll post them once we’re through them ;D