As I pour more energy into the 5E Hardcore rules and see how the rules roll out in action I keep coming back to the idea that these rules might solve the homebrew holy grail for the 5E rules: Updated D20 Modern rules.

The Dungeon Master’s Guide has a whole chapter devoted to converting some aspects of the game to a modern setting, and even had a brief Unearthed Arcana article for Modern Magic. But that was way back in 2014 and as far as my Google Fu can find hasn’t been circled back to again. Many homebrewers have attempted to tackle the project in their own way to bring back the ideas brought up in the 3.5 D20 Modern core book with varying results. Some with good ideas and some that forgot to trim the fat.

But I think 5E Hardcore solves the fundamental problems that DMs and players have argued about for years: How do you make firearms deadly and how do you not make magic overpowered in a modern setting? With the reduced hit points for both players and enemies it solved the firearms problem by making all weapons more deadly but now makes an automatic projectile weapon deadly in even a CR 1/4 enemy’s hands. By making mages roll to see if they successfully cast their spells you put a barrier between instant death and game breaking crunch to figure out how to fight a hedge mage. Spell slots are out the window, the number of spells a character can cast diminished, but all without sacrificing the near gonzo power they wield.

The Dresden Files comes to mind with how it all fits into a setting. With backgrounds, ideals, bonds, and flaws you have enough built-in rules to make a character make sense for a modern world with magic and monsters tucked somewhere int he cracks.

But let me hear what you all think. If you were to use the 5E Hardcore D&D rules for a modern setting instead of a medieval fantasy world how would you do that? What speedbumps do you see to making it work?

I haven’t purchased 5e Hardcore, so I can’t really address that. When I did 5e Modern, I just used the Unearthed Arcana article, DMG and limited individual spell casting to third level, i.e. Fireballs are ok because everyone else has access to grenades (even the mages). Anything higher level was a ritual that took hours instead of rounds to cast.

There was a d20 Modern ruleset made by WotC… I am sure it would adapt easily to 5e… Look for d20 Modern Core Rulebook on DriveThruRPG or Google it… your sure to find something one the Modern SRD (for free).

I know there was a D20 Modern ruleset, I played it. I referenced it in the original post. Even in the 3.5 era it didn’t quite handle guns or classes very well.

It’s out of print, but back in the day there was the Urban Arcana setting for d20 Modern. Modern setting that kept all the races, monsters, and magic. It came out at basically the beginning of 3e. It would be super easy to convert it to Hardcore.

I have the original book so I haven’t looked to see if there’s a PDF, but I’m pretty sure there has to be. 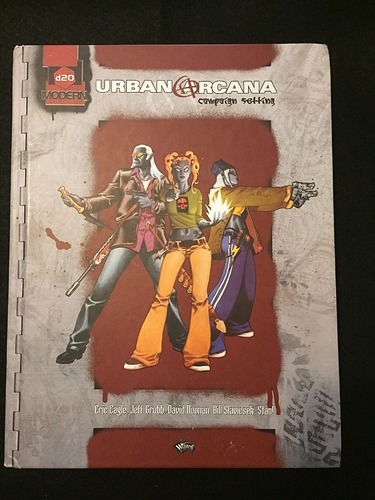 I think between 5E Hardcore and Retune, you could put together something pretty cool for a modern setting.

I think with low HP or even Ghost Mountain gun rules (ie. super deadly), you solve the issue of firearms. Because I think when most people think modern, they think a bit more realistic in terms of deadliness.

As for magic, I think bringing in magic into the modern, means making it a big deal (because super powers are never going to be balanced). For example, shadowy anti-magic secret agency hunting down magic users, or it attracting demons, or whatever whatever. Basically, balance it out with consequences in the narrative.

You could go even further and replace hit dice with a more narrative point system, where the first “hits” represent close shaves (“bullet grazes your arm!”), but this is now getting very conceptual.

Google, even when I append “5e,” “D&D,” or a couple other keywords to my searches turns up working on cars, something about gigabit ethernet cable, and DVRs…

…I feel like both I and Google should have already known that. In that order.

I’ve played a Shadowrun-esque game with 5E, the DMG and Unearthed Arcana article. It works just fine out of the box. I’ve heard that the firearms rules aren’t “realistic.” They’re not supposed to be; your PCs are heroes, hence why they have healing surges, etc. You can start by tweaking those. Then, if those numbers don’t suit your needs, tweak the HP. I don’t think you’ll need to because using the optional healing surge per long rest rule, your PCs will not be bullet sponges after a while.

Magic : pick a power level and level cap it. Magic is already limited in use and scope, and there is no problem with magic mingling with firearms. The difference being, one uses a slot and the other uses a magazine. Sure, cantrips can be cast per round, but so can bullets. Find what fits your game and cap it. For me, that was 3rd level spells. My hardcap was around 6th level. Whatever a Fighter could do, a Mage can do. The difference being, the mage is a glass cannon with a fireball up his sleeve. Perhaps you want to give the PCs access to an A-10. An A-10 is much, much more devastating than a fireball, so up the level cap to match.

My take on 5E Modern? Just run 5E. Modern. And if you happen to swap it to ICRPG? Awesome.

Edit : This post is nearly three weeks old and showed up as new and unread for me. Huh. Apologies for the necromancy.

Apologies for the necromancy.

We don’t worry about that too much. I used to kind of get side-eye when I’d see a post get churned up from long ago, but honestly, if we are continuing the conversation, why not?!?!!

I think the keys for converting 5e to any setting for me would be:

Core mechanic: roll a d20 plus a modifier against a target number
Single Target Number
Hit Points: keep HPs low, so you avoid that terrible scaling bloat
Roll to Cast: all spells require an Int roll
Categories of Dice for Weapons: d8 or d10 for modern; d4 or d6 for bladed or projectile