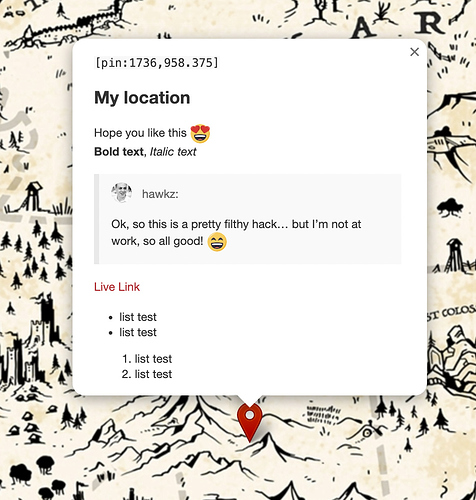 I’m not seeing the pin. Maybe because I’m viewing on mobile?

Or is that a private pin… 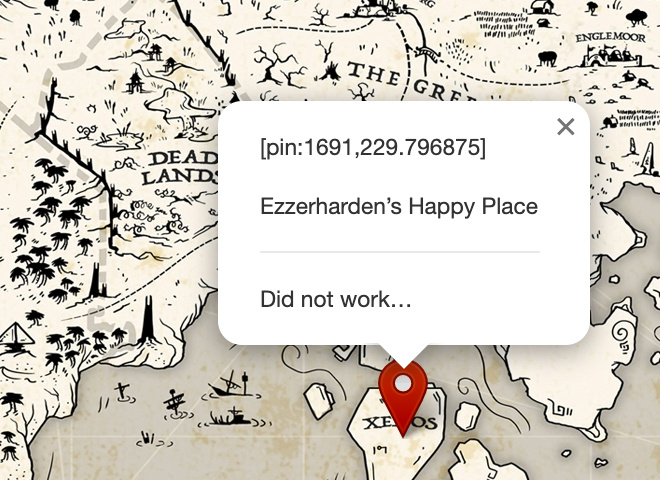 they’re there, but there might be a slight lag before they appear.

I’m not seeing the pin. Maybe because I’m viewing on mobile?
Or is that a private pin…

I can’t see your pin in this thread, where did you add it?

I didn’t add one. I was trying to view the one you made.

Hmm. So you’re going to https://hawkz.github.io/runemapper but just see the map with no pins?

Does your browser give you any errors?

No Pins and no Errors.

I’ve tried a couple of browsers and I do not see the pins. I also see no error message, sorry.

AAAAhhh, I’m proxy’ing the request to forum RSS feeds to get around CORS, but hit a usage limit. Sorry both. I’ll try and setup another proxy unless a moderator could add a CORS header to the forum for me

I’ve switched out for a new service to grab the forum data requests. That seems to have solved it.

I can see it now!!!.. and even works within Notion… neet… love this hack!!! Thanks @hawkz

Very cool! I might put my session notes on here from my latest game. The first event recorded on the RuneMapper.

Awesome that’d be great - I’m gonna wrap up map switching so that’s tidy, and add the Ghost Mountain map if I can find it (@RUNEHAMMER_OPS @Runehammer is this all ok??)

Then I think we’re at version 1.0… so it might make sense to start a clean thread with all the Alfheim posts in one thread all together, Warp shell on another etc etc. does that make sense?

Since ancient times, various tribes or cults have watched over the Pyt as a deity. Wrongfully so, since the Pyt is a nightmare that can take shape anywhere, any time as the coalesced vileness of a given group. We’re lucky it has remained in that area for so long…

One of many things can happen at the exhaustion of a timer:

What is at the bottom of the Pyt?

A golem of acid and carcasses under the possession of Terrible’s owner from back in the day. Tormented and enraged by two whip-wielding Demons, Brutarox & Harsherax, he seeks freedom at all cost. Motivated to obtain glory as before, the warlord might be convinced to help your players kill his own Demons if it gets him what he wants. However, the players would have to appeal to his ancient sense of honor to truly convince him…

Thanks @BlazingPolyhedron looks great. I’ve added a fix for when the number of posts goes past 35.

Keep up the great work!

Can this be a feature added to the runehammer vtt for a GM’s own maps and campaign?

Yeah, that’s totally possible - happy to be open-source etc. but from reading the VTT updates I think the plan there was to leave it unchanged. I can see how having notes and maps in the DM only perspective that players don’t see could be useful though.