How To Create or Convert Life Forms?

so i want to add some races from Hydra Cooperative’s Strange Stars and Mage Hand Press’s Dark Matter to ICRPG, so does anyone know hoe to do that?

My tips are: focus on the big stuff and don’t sweat microbonuses. For example, if creating a cat-person race, focus on the two big bonuses (DEX +1 and maybe Basic Effort +1 or CHA +1?) and one small effect. Or a simple +1 bonus to something and a big effect (like the 2E mecha, who gain one extra Heart).

The idea is not reproducing the feel of the bio-form/race, not every minor bonus it grants in other games (since ICRPG tends to focus on the big picture).

I don’t know the titles and races you mentioned but maybe if you can reproduce their original rules/stats here we’d be able to help with a specific conversion.

I am not familiar with either of the games, but the general rule of thumb is as @P_Frota described.
Don’t try to accurately reproduce those games’ races to ICRPG. There will probably be some loss in granularity and that’s okay. Unless you want to, of course.

Still, there are some general questions you would to answer for yourself beforehand:

If the fluff-part of the races in Strange Stars and Dark Matter is more important than mechanics, you can also have a look at this post where @Sivaar presents an easy and fast way to make up Warp Shell custom bioforms.

For me, the easiest way to convert/create a new life form or character type for ICRPG is to follow the format laid out in Master Edition and the Quickstart 2e. It’s pretty straightforward when you break it down into individual pieces. Then you just have to think about the source material and fill in the blanks.

Here’s an example of a custom fairy life form I made a few weeks ago: 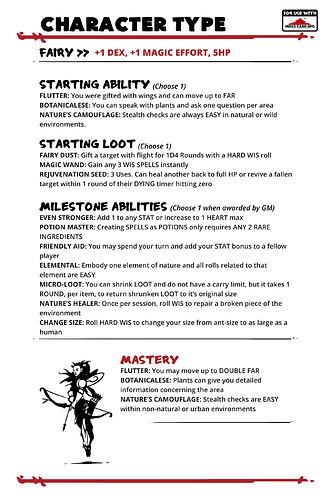 STEP 1: Life Form Bonus
From what I’ve noticed the common setup for a life form is essentially a +1/+1 Bonus in two stats or a +1/Minor Special Ability. So looking at the source, assign a +1 bonus in two stats or trade one of those +1’s for a special ability (like the Reptoids could move on any surface, for example).

STEP 2: Starting Abilities
Next is to come up with three starting abilities. Each of these gives a distinct flavor that sets up a player in the direction they might want to take their character.

STEP 3: Starting Equipment
The starting equipment is pretty much the same as the Starting Abilities except that these are pieces of gear. You can also start developing synergies between the abilities and the loot if you want.

STEP 4: Milestones
Seven Milestones. The first one is easy because it’s usually EVEN STRONGER: +1 to any stat. Then you only need six more. These add more synergies and more variety to your character that will differentiate them from player to player.

STEP 5: Mastery
For these last three, just take your three Starting Abilities and upgrade them a little. In the Fairy example, Flutter was moving up to FAR. If I take a Mastery I can now move up to DOUBLE FAR. A little upgrade is plenty for mastery.

And that’s it. Now, obviously, this is if you want to build something to match the Master Edition style. If you just need a one-off for one specific player, you could do all of these and just come up with one for each step since that’s all they really need. But hey, why not just flush out a whole new character type

do you have a template for that sheet?

Yeah I can get you one when I get back to my computer. Photoshop file?

sure and a possibly a form fillable pdf?

So I learned today that Affinity doesn’t like exporting editable text, so unfortunately the text doesn’t work too well in the PSD file I linked to below, but at least the formatting is there.

Additionally, I’m not very good with fillable pdfs. I don’t really use them so I’ve never made a point of figuring out how to do them myself, but I did make a simple printable version that you could use to write on. Hope that’s okay.

Most bio-forms in ICRPG (ME and the previous Core 2.0) seem to get two +1 stat bonuses. Therefore, when I am homebrewing new bio-forms converted from races in other games, I start by taking a look at what the key strengths thematic to that race happen to be in the source game.

If there are two predominant abilities for that bio-form, I bump the relevant stats (or their closest equivalents in ICRPG) by +1 each. If there are three or more enhanced stats, I allow the player to choose two from among them.

I use this same basic strategy for bio-forms of mixed lineage at my table. In ICRPG Master Edition both elves and humans get a +1 CHA bump. When my daughter wanted to roll up a half-elf, I told her she got a +1 in CHA and could choose an additional bump of either +1 DEX (elf standard) or +1 INT (human standard), depending upon which parent she wanted her character to favor.

This rule seems reasonable to a nine-year-old…

thanks! it could be very useful to me.