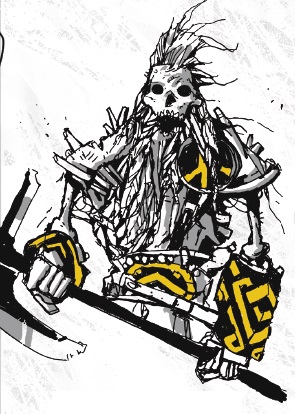 I’ve been pitching VDS to our group and an interesting question came up with regard to the three regenerations Immortals get. On page 38 it says it kicks in when your body is “in safety with allies for an hour or more”. So like if you get eaten by a dragon, or fall into lava, or vaporized by a scour beam…you’re just insta-dead? Like you need to have a body left? Likewise if you fall into an ice rift or down a shaft in an Infinitum cruiser or float off into space or some other unreclaimable spot, there’s no respawn?

Other folks feeling this? It seems like for folks that single handedly are supposed to make the difference between humanity living or going extinct that they just don’t feel THAT much superior to just a regular non-Immortal dude as they’re written now. I feel like something’s gotta’ change here:

So here’s what I’m noodling. No hard cap on respawning, but if you’re destroyed beyond recovery (eaten, acid, planet explodes, vaporized, float off into space) you just die. No hard cap on total Immortals (the books even seem to have my back on this–the book assumes three Moldy Gang Immortals, three in the cannibal encounter and the Hannibal encounter is another one, plus Bor with the Wyrm, plus two whole ships mentioned that have untold thousands each that you can run into) but that everyone is panic scrambling to try to find more than the ten that anyone knows about right now.

Do these changes kill the vibe of Viking Death Squad? Is there some other solution I’m not considering? Is my problem not really a problem for some reason I’m not taking into account? Let me know.

Also I’m curious…why do Immortals in the artwork look all skeletal and zombified? There’s a few references to that in the book too. Are they like undead or something?

Hmm… interesting quandary for sure, and the obvious answer will, and always will remain, to do what’s best for your table. For me, it’s a question of flavor and what Viking Death Squad is aiming to do. I really enjoy how the mechanics and the tone of the setting mesh into the heavier, high-stakes action of going against the War Pigs, the impossible odds, and the strict “Ten Only” Immortal limit.

But to answer the original concern, I would interpret the detail on when your regeneration kicks in a little differently. How I read it, is that if I die as an Immortal, I’ll revive once my allies find rest and safety, regardless of how I died.

It makes it so that when Immortal’s drop-dead, there is a consequence and a delay before the Immortal comes back into play. Then it’s up to the GM to determine how exactly he comes back in. Maybe he regenerates from the blood he spilled during the fight? Maybe a replacement body drops out of orbit? Who knows?

You absolutely could remove the respawning cap and your ruling on destroyed beyond recovery makes total sense. I don’t think it would ruin the game by any means and you would just be making it your own, which is awesome!

As for the skeletal/zombified look of the Immortals, I think that mostly just comes from where Hank pulled his inspiration from and the style he was after. Within the fiction though, these Immortals have been in cryo-stasis and augmented with technology for thousands of years. Thousands of years of torture. It’s rough being an Immortal.

Hope that helps and rock on!

i might even do it as a new coffin drops out of the sky and out steps a new you. how or why? good question.

That reminds me pleasantly of Paranoia–the game so crazy you start with six identical numbered clones of your character and every time you die they load your next clone up with video feeds of your old character’s memories as best they can, stuff him into a rocket and launch him in the general direction of the character party.

Though I’m pretty sure if there’s a ship still in orbit dropping clones of your characters in landing pods that there’s probably means there’s more Immortals on board. Unless it just so happens that the ship only has three copies each of JUST the player characters on board…which seems a little wonky? Again that seems to argue against there being only 10 immortals, something that seems to get challenged a lot in the various encounters throughout the book. So I dunno. Maybe not? Keep what works, toss the rest?

I like the idea that the Immortals aren’t so much zombies as they’ve gotten weird from being thousands of years past their expiration date, freezer burned and riddled with genetic errors from the biotechnology in them having long since mutated and atrophied. Honestly this makes a good reason for the three regenerations cap for folks looking to take it that way.

Maybe if they’d been awakened 2000 years ago they’d be in full fighting glory, young and strong and able to respawn indefinitely–but time has turned them into weird grizzled monsters that can only be reborn a couple more times and look like Snoke from Last Jedi.

I would just roll an appropriate timer dice to respawn maybe D8 ignoring anything below 4 say. A lightning strike and boom back in the room… Just a idea…but nobody knows except GM and or player…

That is a really neat idea. I like having a respawn timer. What if Immortals, when they get slain, roll a d6 for how many rounds until they regenerate and humans roll a d6 for how long until they expire without treatment? That way you have the same mechanic if you get hit, both character types roll a d6, but if you’re an Immortal you hope for a low number so you can get back into the fight, but if you’re a human you hope for a high number so your companions have time to get to you and patch your guts back together. I love the Wolverine flavor it gives to Immortal regeneration. And it can lead to some neat tense moments trying to finish off a wave of enemies so someone can save the life of a beloved human hero.

I think that idea’s a keeper. Sweet! Thanks.

interesting ideas, but I don’t see your intitial pain point. Being killed beyond recovery is a natural part of the war, the danger, the risk of it all…

‘softening’ the harshness of this world is, to me, missing some of its fun

Infinite respawns might make immortal players reluctant to push their gear, because at that point dying becomes “cheaper” than losing the gear, and you want to have it when you come back. Doesn’t make or break the change. Infinite (or even increased) respawns with caveats could be a fun (if different) way to play - but it’s something to think about.

What if their immortality was attuned to a physical runestone, with a different rune for each immortal.

I like the idea of the players creating a rune unique to them, maybe creating an actual physical stone painted or etched with their rune on the table.

As long as the runestone could be retrieved then the immortal could regenerate. It would also help explain how the immortals regenerate after each death.

If their runestone was lost forever or even destroyed, then the immortal loses their ability to regenerate.

Now we’ve opened a can of worms… so what if the War Pigs are trying to collect the remaining runestones? Are there really only 10 runestones in existence? Who/What originally created the runestones… and why?

I think you’re overlooking the cost of being taken out of action for 1-6 rounds of combat. You really don’t want to be helpless when a badguy can scamper over and coup de gras your remains, finishing you off for good and turning your head into a hat.

No for sure. The idea isn’t to soften the edges. The crazy over the top metalness is the setting’s charm. I just want to try and get a handle on it so I can explain it to my players.

Lemme see if I can explain:

If you need to stand vigil over an Immortal for hours before they regenerate it stands to reason that often that won’t be possible (acid, lava, beam cannons, float off into space or down deep crevasse). This means Immortals can frequently get insta-dead. With only five for an entire campaign (10 Only - 3 Moldy Bunchers - Bor & Hannibal) that’s maybe too much?

One is to have respawning work differently: maybe no cap to how many times you respawn (it got suggested maybe you respawn off a timer rather than a vigil which seems fun) but that you can still be insta-killed feels like a neat way to do it.

The other idea is that maybe there really are more Immortals out there, which seems like it breaks a core pillar of the game (TEN AND TEN ONLY) …but then a lot of the scenarios deal with fallen cryopods or exploring whole coffinships with thousands of immortals, so maybe it’s not THAT against the spirit of the world as portrayed in the book? Folks are noodling it. I think it gives a nice beacon of hope and hook for adventure ideas.

But like folks can go with either fix, both fixes, or some other thing.

That’s been the discussion thus far.

The lightning bolt is metal as hell, I love it. I was planning on them rising from the dust and reforming that way but a spontaneous lightning burst is way cooler.

Yes! Yes! Yes! I love the idea of a lightning bolt regeneration.