This came up last session. The game is set in a black market town bazaar prospered into a too-big-for-it’s-own-good town. There’s a guy who blew all his money on healing spellstones to try and heal this little girl, eventually running out of money and sneaking in to steal more. The gang who runs the town are super mad at him. The PCs asked “How much does he owe?”

What even is money in VDS? I can’t imagine it’s all barter, like people going into bars and swapping pairs of boots and stuff for beer. That’s weird. But I don’t love it just being gold…and paper money should have all burned away millenia ago. Whatever it is should be freaking Metal–like monster teeth or pentagram coins or something.

Any official answers people know? Any cool ideas that pop into folks’ heads? What have you all used in your games?

Who is more metal than Daniel Pinkwater? In Guys from Space plastic fish were accepted, at least at the intergalactic root beer stand.

More generically, small useless trinkets being useless for anything else - but rare because who makes useless trinkets anymore? - are available to keep track of exchange. Buttons, seashells, coins, shiny plastic, crackerjack prizes, all interchangeable. Troll dolls count as ten. Worth a beer each, handful buys a week’s lodging.

I think it was Gabriel Garcia Marquez, or maybe another magical realist author, in a story that took place amid a revolution and few literate people, promissory notes from the government or companies were allowed as currency, worth something per word since no one knew what they were actually promising. Someone’s desperate note for help was considered too valuable to deliver - so many words!

World’s first writing (in Sumer anyway) was also the first money. Clay tokens with a picture of what was owned by someone. Later, pack a bunch of tokens in a clay ball and label with the contents. All you need is mud and a sharp stick.

Rai stones in the Yap Islands in the Pacific are the most metal of moneys. Often too big to move (4 tons), but ownership and exchange established by oral tradition. Some were lost at sea yet still have an owner that everyone can identify. How valuable it is can depend on who owned it long ago. Used for big transactions like marriage or war reparations.

I dont think VDS has a society stable enough for wealth or money per se. Trade is used, and most ‘wealth’ is simply shared in a desperate play to survive the next few days…

On one hand I buy there wouldn’t be big national economies. Plus it’s nice for the themes of the game that people are fighting over things that matter rather than bags of gold.

That said the game I’m running there’s gang members that are owed a debt of X-currency, and the idea that there’s no word to quantify that amount isn’t very helpful.

Maybe it’s just a local currency used by the town? Like there isn’t one overarching currency, and most of the world is just barter, but towns that see a lot of trade will have their own system.

I like the idea that Knife’s Edge uses Skull Coins, a slag coin hammered out of simple molds of a poorly rendered skull with a hole in it’s head–that its base value was originally how much it cost to hire a killer to kill someone (not much) back when Knife’s Edge was a grim black market bazaar. 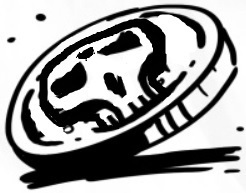 I found this blog article that argues for using abstract wealth and reputation instead of X amount of currency.
Have a look and see if you can use that for your game.