I would like to use maps or google earth as the “map layer” and I am wondering if there is anything I could use to overlay the tokens/grid.

I need some technical help from the shield wall, or maybe just be talked into an easier task. I have been wanting to do a modern campaign based in our hometown or a nearby small town and would like to use accurate maps with as little hassle as possible. Most of the players now live out of town and we typically use roll20 or discord to play virtually. Some are not from the town so its not as easy as saying “main st and 3rd” and hoping they know what we’re talking about.

I’ve considered squaring off sections of maps and just doing different pages for each section, but that is a considerable amount of work. I have also thought of using town pictures of buildings and parks while doing more theater of the mind, but I would like the roads and buildings for a more tactical style of play.

The general idea would be an alien invasion or occultists taking over the town. I would keep it contained to a 2 mile diameter at a fixed point with some in game reason they can’t go beyond that line. I think having it in a place everyone knows will add a bit of fun and realism when they know what ballpark a ufo crash landed in or which house got pulled into hell by some occultist mishap. I will probably use Bearcats as the backbone for this.

A big thanks in advance, you lot always seem to find a way to simplify what I want to do after I have needlessly over complicated it.

I think it’s a super-cool idea you’ve had to try a modern game based close to home IRL. If the players have real-life experience with the actual lay of the land, it should prove very immersive.

If the mechanics are considered, you may not want or need to prep the entire two-mile circular area as a detailed scale map. Let’s say you consider a character FAR dash as traveling 60 feet or 20 yards in a (6-second) round during initiative. There are 1760 yards in a mile IIRC, so that’s 176 rounds for characters to sprint across that two-mile region (under 18 in-game minutes, which is a decent pace for an encumbered person over imperfect terrain). And that’s if all they do is run. Vehicles like cars might allow faster transit, reducing the number of rounds needed to traverse your “universe,” but running your entire game in detail at map scale might not be your easiest or most entertaining route.

An option would be to prepare smaller key areas with detailed scale maps and then connect them as “nodes” with the more sprawling, less interesting areas of the map used as “pathways” between them. Superimpose this web of “nodes” and “pathways” over your big regional map. This lets you set up travel skill challenges as appropriate, for things like chase scenes or surmounting obstacles or roadblocks; each “pathway” can have its own array of “milestones” at specific points along the way that are designated as points of interest or places where things can happen or actions are squired to proceed. For example, the area around the PCs’ home base can be a carefully mapped and detailed “node”; so can the feature-rich downtown area on the other side of the two-mile circle. These “nodes” can be connected by one or more “pathways” like “the freeway,” which can have its own “milestones”: “the on-ramp,” “the roadbock,” “Exit 36,” and “the downtown off-ramp” where things can happen—driving rolls, combat encounters, etc.

The sky is the limit, really, but a more focused “flowchart” approach should keep you from having to prepare every square inch of your large mapped region for play, while simultaneously speeding up things at the table for a more cinematic feel to your campaign.

Hope some of this helps. Good luck!

@chrisbynum awesome suggestions. I may use the nodes idea for the key locations. Its much easier to get a decent overhead screen shot of a smaller section of town than as a whole. It can still be detailed, as you said, but keeps down on boring travel or dead spots in town. Thanks! 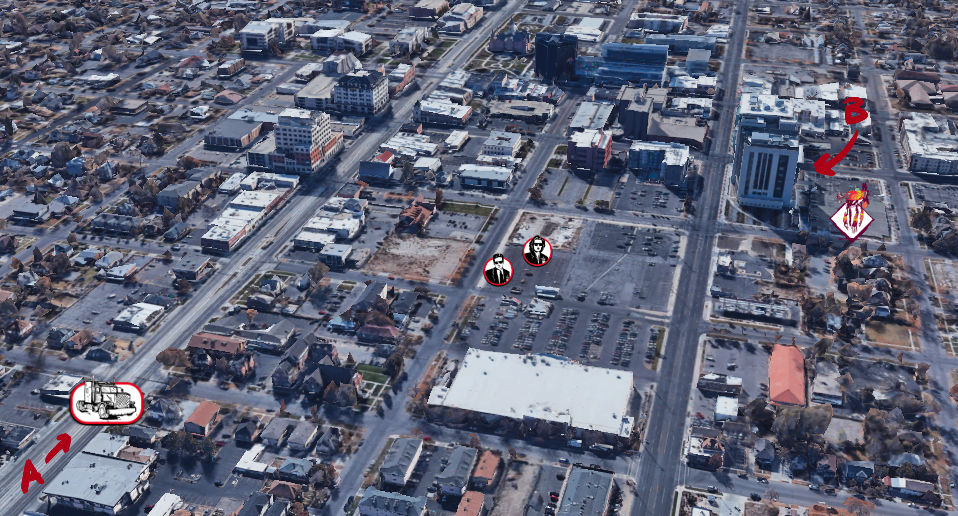 I’d think just going to Google Earth and using the 3D buildings can give you an interesting perspective on a town. Then you can just overlay your tokens and things in the VTT proper.

From there, you can glide around and take snap shots of different parts of town or even different angles.

oh that’s sweet! What VTT are you using? can you actively scroll while you are playing?

That is really freaking cool and perfect for Vigilante City. I have been struggling to find good modern maps of roof tops like that and this is perfect. The perspective is quite nice!

I just use the RHVTT and you can’t scroll through all over Google Earth. You can zoom in and scroll around inside the VTT once you’ve dropped an image in though. I’d just have a series of Snap Shots for various perspectives.

For example, if I was having my adventure in Salt Lake City which I’m familiar with I’d use shots like these: 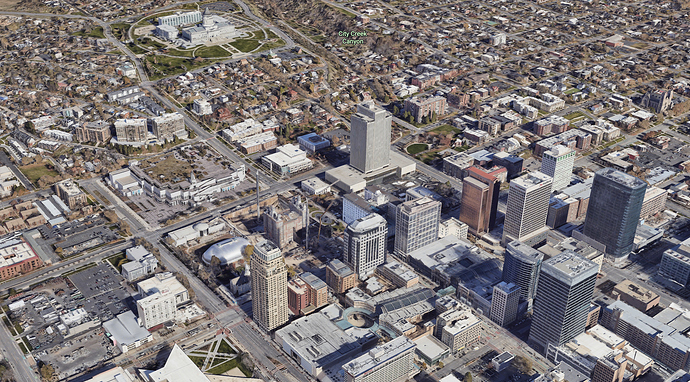 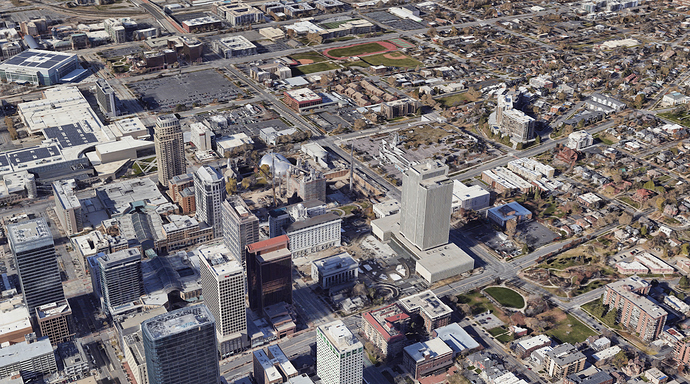 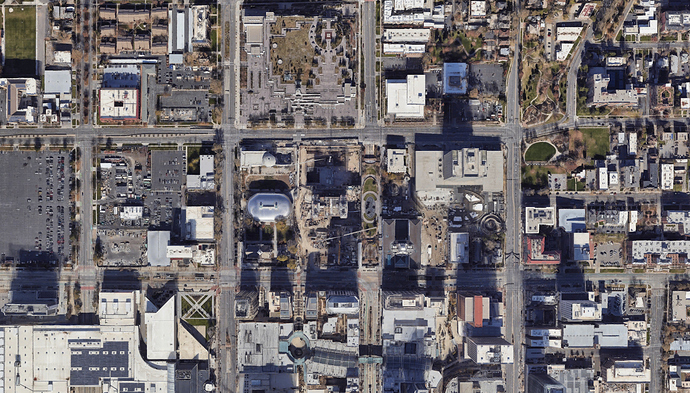 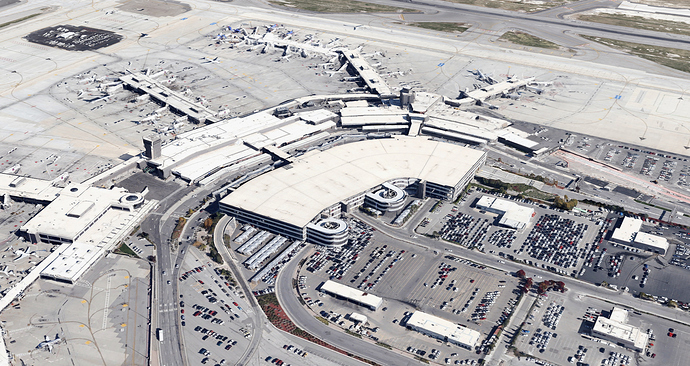 My players would hopefully be familiar enough with these spaces that I’d be able to just name locations and reduce my time to label anything. That way I can just drop in tokens and go.

For those interested I am thinking about using this as the center point for the game: Dunlap Island Park, Cloquet, MN 55720 (46.726148, -92.462366) . I think this will be a fun center location, the bridge and river lend well to factions or bottle necks. It also has a shops section, dense “in town”, lighter out of town housing, woods, factories,a hospital and trains.

That is the ticket!

These areas of interest would all be “nodes” in a flowchart-style layout, fully mapped and detailed.

These places would then be connected by various pathways with their own milestone locations along the way, either built out solely in GM’s notes with bullet points and site-specific mechanics, or given small individual encounter maps for more involved interactions.

Yeah, this is an eye opener! I just did some looking through Detroit… 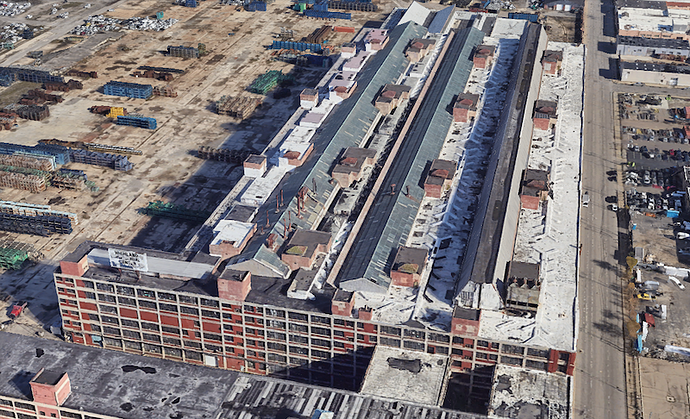 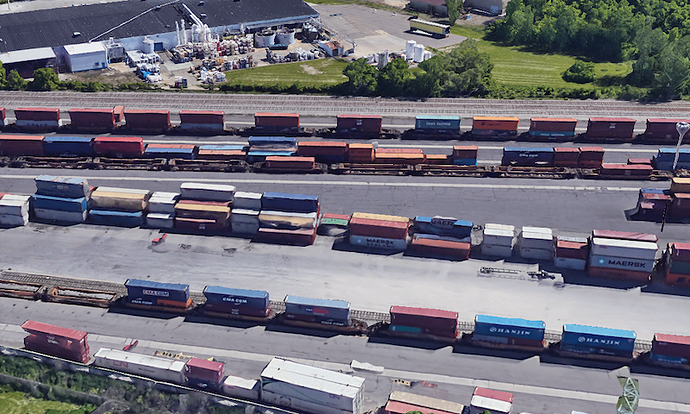 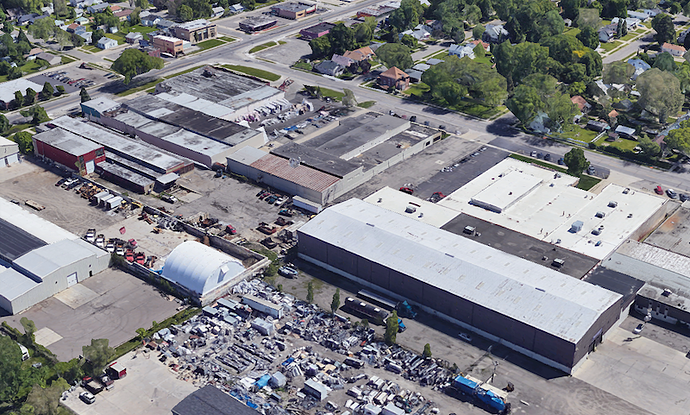 That rail yard would be a blast to run an encounter in!

ok that makes sense. I really like how you’re doing it

Right? I think there is a lot of potential.

That’s going to work great for a Vigilante game!!

What level of patreon do you need to be in to run on rhvtt?

Anyway not to cut off a reply from Kane. I came here to say that my group often uses google maps for our Delta Green game and its great. You can create a shared map that everyone can see and work on at once if you like.

We don’t tend to use tokens and stuff though, just use it to find landmarks and get a sense of the terrain.

double thanks! I’m interested in trying that way for sure. Have you noticed any issues with people having a hard time remembering where things are while things are in progress or is it as simple as " by the 4 way intersection you see a group of hooded figures. you are all near the blue house" and reminding them if they need it?

I am a player in the game, not the handler. But basically that’s it. You can place pins and notes and stuff if needed though to remind you where things are.

Slick, thank you. I will be looking into this for sure.