Thoughts on a new monster generator?

Edit: Here is the link to try it out https://evanfinnigan.github.io/icrpg-monsters/, and here is the Github Repository if you want to make your own version. Fair warning, the RNG tables are hard coded in right now, I will probably move these into a seperate JSON instead.

I’ve created a very early prototype of a monster generator if that is of interest to anyone. If people are interested in using it I might put it up on github, I am new so it’s a bit rough but I’d love to hear thoughts and ideas. The idea is to create something that can provide some inspiration or possibly even create workable creatures in a pinch, with printer friendly pages.

Here is some example output from my current prototype: 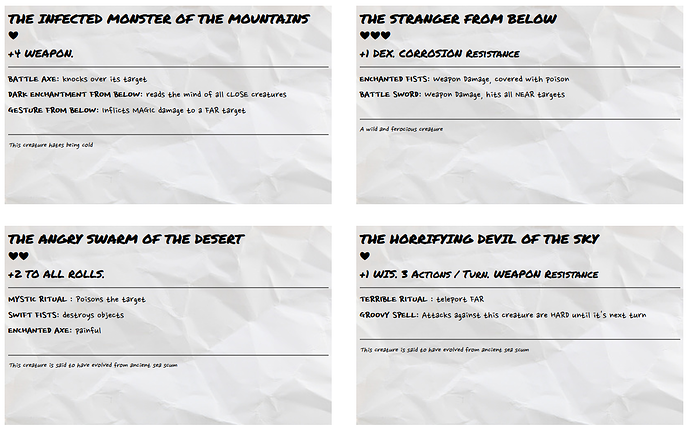 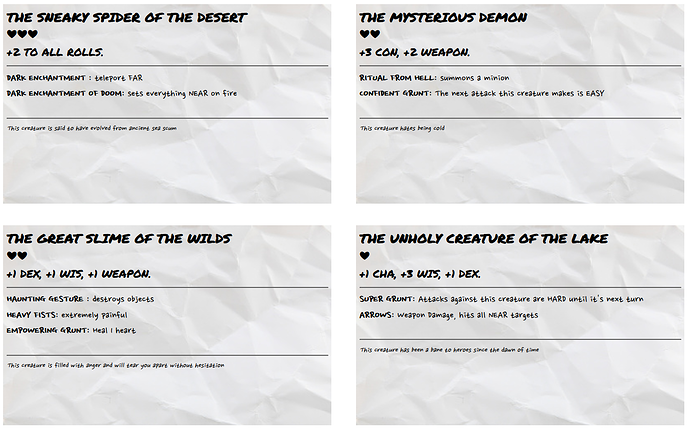 Right now it’s pretty repetitive and probably not balanced at all. The stats and abilities are entirely random so they may not fit well with the creature descriptions and names. If anyone has any feedback I’d love to hear it.

First of all, thank you for your Effort, it looks great.

I think you can’t dodge some of the contraits, like negative STAT for a big foe.

And alikes.
What do you think?

I’d remove any stats that = 0. Players / Game assume a bonus is zero if none is listed.

I’d also remove negative stats or effort. I avoid penalties like that entirely in my own game.

If you have master edition check out p. 146 -148 for the Monster Tiers. Stuff like your venemous ooze which has 5 hearts and +3 to all rolls is a very difficult enemy!

Otherwise - rock on. I love me a random generator. Keep going!

And is there a possibility to add “rarity” like Diablo monsters?

If negative stats are rolled maybe it means that something else is compensating for 'em?

I’d rather see “XYZ rolls HARD” than Negative stats, where XYZ isn’t a stat but a type of action or resisting. If such a thing is necessary.

The only time I modify a number downwards is the “EASY ROLL.” which is just a lower target, it isn’t modifying a result of a die as it rolls on the table.

If I am penalizing a character, NPC or monster or player, it’s with a HARD roll. “Because this monster is big and slow, its DEX checks/attempts are HARD.”

I don’t think you’ll find support for minuses as modifiers on core stats or effort in the ICRPG books as written. Not that you’re limited to the content of the books, of course: DIY, YMMV, do what works for your table, and so on. But in this case I found it’s a feature worth preserving, at least in my games.

All good ideas! I think I’ll take out +0 / negative stats altogether, and continue messing around with it. When I post it the source code will be available if you want to mod the generator for more custom creations.

@Kotzsu I’m still waiting for my master edition to arrive so I don’t have too much to go off of right now as far as examples, once that comes I’ll probably better off

@BlazingPolyhedron It’s not hosted anywhere yet I just have it running locally. I’ll put it into a github site later when I have some time, and when I do I’ll share a link! I’m sure something like rarity would be an easy add

Yeah you may find a scant few officially sanctioned negative modifiers throughout all the versions, but they are highly situational. I’d argue that “no negative dice modifiers” is in the top 5 innovative design decisions that make ICRPG really sing at the table.

I ain’t against exceptions, perhaps the code says to ignore any negative stat below -5 to make it worth while? So that when that -5 pops out you can tell the creature’s really slow at something!

Ok folks, I’ve put up a webpage for it if you want to try it yourself, check it out here

If you have ideas for the monster names, spell effects, lore, etc. I’d happily take suggestions, I just made stuff up off the top of my head pretty quickly. 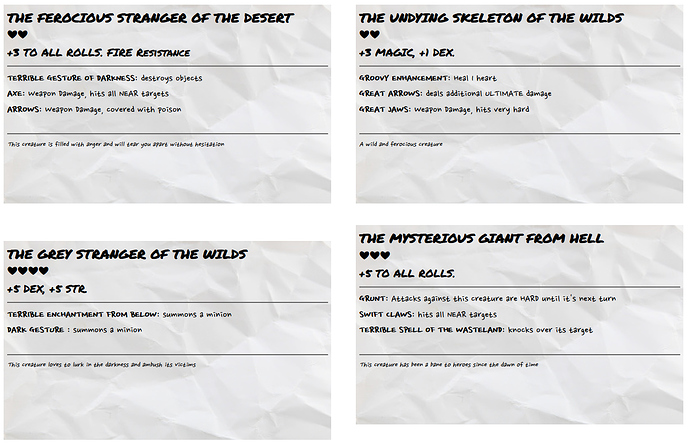 Did you try the monster generator tables at the end of the ICRPG book? Go through the D&D bestiary for more suggestions, use Maze Rats tables to generate your own abominations, don’t be afraid to split certain species into others (blue spiders, red spiders, etc.), and rarity, like Diablo, which could give extra resistances or difficulties. And here’s something to inspire you, perhaps?

Oh! And do you remember templates from 3.5 or Pathfinder or even Five Torches Deep?

Templates that modify the creature’s core stats because it’s Young, Old, Undead, and in the case of 5TD you get templates for roles (which I don’t remember at the moment). Would be cool to have a button on your generator that allow us to get four times the same creature but with different roles so you obtain a warband to fight your players with if they annoy a faction?

I have not seen those tables, my book is still in the mail! I am new to the system but have been following Runehammer on YT for a while and just thought the stat blocks looked simple enough that maybe a generator could be made without much Effort (maybe one heart). I looked to see if there were any already, and it seems like a couple are around though some of them were dead links.

I will definitely check out Maze Rats and Diablo, too, thanks for the ideas! I think rarity would be cool, I need to come up with a better way to organize the data I’m using to generate the creatures so I can determine how common certain effects / names / descriptors are, and maybe better ways of pairing them up. I have intentionally used simple details so far, partly so the DM can be creative with a creature and add to it, and partly just to reduce complexity of the generator.

Oh, fuck yeah, I’m also all for tiers of the same creature as it evolves like some sort of Pokémon! Maybe, when a player generates a creature that evolves, the generator makes the base creature, the transition (cocoon, teenage years, etc.), and the final evolution?

I think differing power levels would be good for variations. I’m not sure about relating it to young vs old for everything, since that sort of assumes the creatures have natural origins and regular concept of age, but I like having monsters that are creatures of folklore, maybe having mystical or unnatural origins, being born of hatred or chaos, that sort of stuff. But having varying power levels generally is cool.

Once I organize the data better, probably into some sort of JSON format, hopefully it will be easy to customize the nouns / adjectives / effects easily, since there are so many different flavors of fantasy and different settings

Perhaps split them into /[Creature types/] to ensure some adjectives don’t mix with some of the words?

Here are a couple of random generators (from the book The Terrain Randomizer on DTRPG).