The Market - An ICRPG shopping Hack

I discussed this long ago on discord when I wanted some ideas on money and trade for my game. This is what we came up with and I have been using it at my table to great success from both enjoyment and prep time efficiency.

Felt it should be written up and shared as others might find it useful. If you want the PDF or have any suggestions please do let me know! 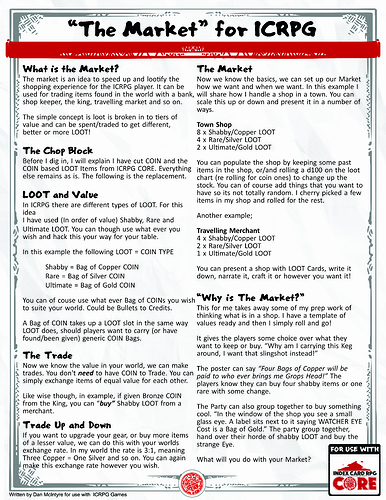 This, plus paying your PCs 30 silver coins per adventuring day is the perfect way to handle merchandise in TTRPGs! Well done!

Hmm. How would you manage really large or really small sums of money?

Obviously, we don’t want our RPG systems to be as complex as the real world, but do you still want some of that grimdark edgy dystopian mood to it? It seems like what you’ve got here feels a lot more like an egalitarian society. The amount of gold a rich person could carry around is only nine times more valuable than the amount of copper a poor person could carry. Even if they loaded up a carriage with their wealth, the difference would be nothing like we have in the real world.

“Hello. My name is Count Vampula. I want to hire you to steal the Ring of Eternal Bliss from my friend/enemy Duke Ravenguard because he is an evil vampire who is using it to lure people to their doom in his mansion. If you do this, I will pay you 3 bags of gold and give 3 more to the orphanage near my castle, just to prove to you my good intentions.” (Wink wink.)

Short answer, I wouldn’t handle it for my game. Small coin items are just free or bundled together in bulk and we are not using anything above ultimate LOOT. I think If they had 20 items of LOOT at Gold Level they would be unstoppable!

But… you could scale it as far as you want. Your trade between coins could be 4:1 & you could have more tiers of coin values. If it was to be scaled, you might need to allow some extra slots on top of the current 20 but just for coin. This way you could do 4:1 trades and save up for platinum items.

I went with Copper Silver Gold due to the loot we have set out in our game and we are not focused on wealth as our story. For other stories though, wealth and riches could be more important!

MARKET for ICRPGThe market is a way to speed up and lootify shopping in ICRPG. It can be used for trading items found in