The Dice can be cruel... even to the GM 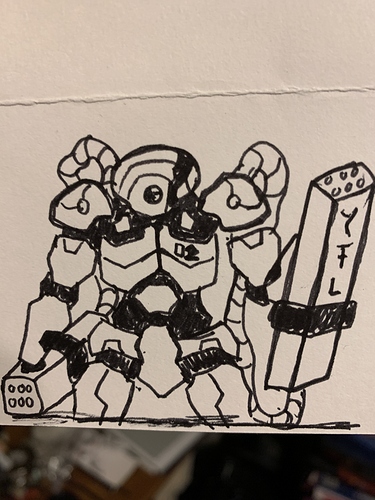 Ok so my players are brand new not only to Altered State but to Table Top RPGS. I am going through the Garden of Eden story and last season was escaping from the ArkTech. I wanted to take the classic idea of being chased by a Minotaur and adapt it to altered state. Thus was born the MNTR 09 Battle droid. Twin arm cannons, flamethrowers, missiles, if you are near you get smashed, and if you are not close to it, it will charge you. Bad ass right? Ok they were almost out of the building second to last floor and they ended up killing it by throwing everything they have at it. Which is awesome don’t get me wrong. Then they exited into the lobby. Which had one last loot box. To show the players how powerful ArkTeck was I had MNTR 10 bust threw the ceiling and drop down on them. They freak out and run for the doors… except for Decker who grabs the loot box and rolls a 16.

Yep that’s right. My players now a 15ft killing machine and I can’t do anything about it…yet!

Oh sick! That’s such a great outcome. It’s awesome that they have a killer robot! But, it can always be hacked back or destroyed by a MAW rocket!

@Alex I thinks it’s great but you are right. Everything has a price. I am realizing how powerful they are compared to an alfheim character. Now the kid gloves come off!

Hahaha. Yep. ArkTech won’t play nice. Heck, one of their powerful psychics could just crumple that thing into a ball of twisted metal.

Oh man I can’t wait till we play on Tuesday. They will try and rescue their bonds from the ArkTech storage facility. Their bonds will be taken over by the things in the picture and protected by a high level psychic. Trying to make this encounter more high stakes with the hostage situation. And as you know their bonds stacks have been switched with ArkTech agents.