Terraria, a mechanical sibling to ICRPG in videogame format

Greeting fellow lumpy heads, today I want to introduce you to a famous indie videogame that you might or might not have heard of. I’m talking about TERRARIA

As always, WALL OF TEXT WARNGING!! Now to the stuff… 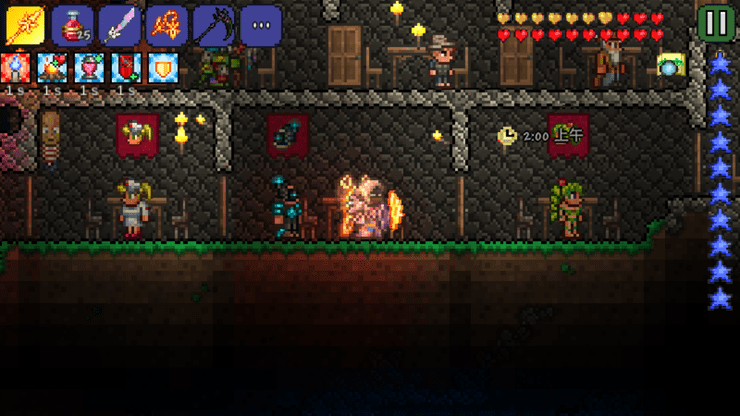 My purpose with this post is two-fold, to recommend you this awesome game, and to find what kind of interesting and cool stuff we can get from it, seeing that it is the closest thing out there to an ICRPG videogame.

So, in Terraria you gather resources (in a similar fashion to Minecraft), craft tools, build bases and kill monsters for Loot or more resources. Your main goal is to beat every Boss in the game, unlocking new “stages” and features for your world.

There a couple of interesting things going on here. For once, even though there are distinct “Classes” in the game that play different from each other (Warrior, Ranger, Mage and Summoner), there are no skill trees or lvl ups, everything is LOOT based. The different equipment and armor sets are interchangeable and allow for a very non-linear and strategical approach on how you “build” your character and choose your playstyle. Even HP and Magic is LOOT based. Spells are “weapons” that deal magical damage and have different types of utility properties, and you need to consume Heart Crystals (found in underground mining) and Mana Stars (crafted from fallen stars during the night) in order to increase those respective stats for your char.

Then we have the world. There are “milestone” moments in the game that award you certain LOOT or enable certain enemy spawns and even cause completely new biomes to appear in your world (which is mostly randomized every playthrough). This is VERY RPG-ish, as you start the game struggling against little slimes in the forest and end up fighting the equivalent of Cthulhu in an epic fight for the world. What’s interesting is that, as you play the earlier stages, you find these places like The Dungeon or The Sunken Temple in the Underground Jungle that you can’t access right now as you either lack certain key LOOT or there is a guardian far too powerful for you to defeat at the moment.

There is a very The Legend of Zelda feel on how the progression works, which explains a lot since we know ICRPG itself was inspired to some extent by it too.

So, what can i bring to my tabletop from this awesome game? I’ve pinpointed a couple of stuff I have “ripped” myself into ICRPG, but I invite you to check out the game yourself too.

Ok, this has gone long enough I think haha. What do you think?

P.D: Terraria is also fully multiplayer and even available in mobile platforms. I’ve used it many times as an alternative to gaming nights when I’m on GM burnout but still wanted to hang out with my usual suspects.

I think ICRPG Terraria is a brilliant idea. Especially if you “open” the world to the players with a full screen display. “Yep, there’s a chest right next to you. Wanna expend effort to dig into it? 'cause there’s a thing that wants to nom your brain, too.”

Tried it on iPad, didn’t care for it. No tutorial, first time I wandered aimlessly until nightfall then died. Restarted. Googled and found a wiki page, oh I have to build a house. Ok how do I do that? Googled some more. Then battled the controls to put blocks where I wanted them, night fell, NPC died, restarted again. Need a door? Gotta craft it. How? You need a workbench! How do you craft a workbench? Googled some more. Oh, I have to assign the NPC to the house? Ok, how do I do that? Googled some more. Oh it’s not VALID housing, NPC died again (you need to craft then build background walls too, who knew?) Had enough, deleted the game. Too heavily crafting focused, way too much like Minecraft for my tastes, and too much work to get started with no clear direction.

Just my opinion. Perhaps it’s better on PC with a mouse/keyboard.

No, you pretty much described it : Terraria is very much a side scrolling Minecraft with a large degree of depth to explore (no pun intended). It is very Souls-like in that you have to experience the world to discover more of the world. And it’s a sandbox game, so you could spend almost all your time building and crafting or go out and hunt bosses.

Having played a lot of both minecraft and terraria, I can certainly say that it is not like it at all, at least beyond the surface. Minecraft is a building sandbox with close to none progression, while terraria has A LOT of progression and depth in continued gameplay, in combat, exploration AND building too (as you start to get cable and better tools it can certainly start to get crazy lol).

Minecraft is peaceful and immersive, while terraria is tense and punishingly difficult so when you master it you feel like a boss. But oh well, I know it “suffers” from not really being THAT accesible, which I think is a strength actually, let me elavorate.

As a game design discussion, I find your opinion interesting since you couldn’t connect with the game because it offers close to none guidelines. That’s sort of crazy since my first time with it
I was continuously blowing my brains off as I discovered new things, I reaaaaaally enjoyed the lack of hand holding. Overall, I REALLY hate when games sort of spoil themselves by blatantly telling you what to do and how to do it.

Terraria expects nothing from you and in return it rewards your curiosity, which I think is one of the best ways to experience a game or any media for that matter.

I totally understand why you didn’t liked it, not yer cup o’ tea, no problemo. In my case tho, it evoqued the same feeling I got when I first discovered D&D and started to dive deep into the lore and mechanics, without having anyone actually guiding me through.

EDIT: Absolutely yes, the PC version is bounds and leaps superior to mobile and console. Idk about the 3ds version tho. Strangely enough, most people I know that plays it, does it on mobile shrug.

The sandbox is real yes.

I spent like 80% of last december+january designing and implementing a central circuit that controlled a teleporter hub on my then current Terraria world. So. Much. Cable.