Story details! Touches I'm adding to my first game as a GM

So playing through Last flight of the Red Sword, I wanted to add some fun details to tell the back story and add realism.

I’ve added spoiler tags as I know two of the players participate in the forums.

I found a font from the old “Commander Keen” game (some nostalgia for me from the old shareware days), and writing text in English, then converting to that font. So what starts as this:

Will look like this for the players that speak reptoid:

In addition, my wife drew some custom art for the encounter, it’s a special item that will do something fantastic at the end. 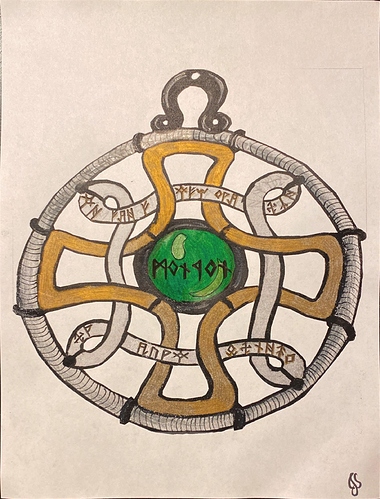 What are some touches you do as a GM to add to story?

Two things that I enjoy to develop story . . .

I’ve learned over time that as a general rule, GMs care a great deal of their overarching story or world, but the players are primarily invested in their characters. GMs may tend to overestimate the players’ investment in the world. So, in short, try to make the PCs the real stars. It seems obvious maybe, but worth reminding ourselves.

One way to accomplish these things is to work it into your adventure design. Many GMs have a “planning structure” such as Timers/Threats/Treat in ICRPG. In that vain, I try to make a conscience effort to plan one or two story notes or NPC reactions customized for one or more of the PC per session. These can be really small things but they tend to bring smiles to the table.

All of this is clearly easier to do for developed PCs in a campaign than in one shot. But it can be done in one shots as well .

This is great. I spent some time reading through the character intros each person built, and weaving bits into the story for each of them.

Also adding a few NPC’s to interact with, in this case it’s crew members who haven’t fully mutated and other time warp elements.

This will enrich the story line and give each character a chance to respond/develop their character.

been playing “Last Flight of the Red Sword” and it’s turning into a three evening campaign…the crew spent quite a bit of time in the bridge tonight…had some original art on an amulet and a few scrolls, as well as captains log and medical logs written in “reptoid”…two of the party members had alternate versions of themselves appear and provide gifts to the individuals as well as the party…I threw in a gazpacho recipe for one of them because he loves to cook and his character loves to cook as well…so I figured the future version of him would give him a recipe he’d been working on to give him extra time to improve it…we made it through the bridge, a few NPC interactions, and exploring the ship further…setup some back log on the “reptoid gargantua” as being the Chief Officer who had been mutating, aggressive and sent to the medical bay for evaluation…then some medical bay notes on his progression in size and into madness, I wanted to add some build up to fighting this guy that I think those details will lend to