In honor of Mandalorian, I reworked my previous Star Wars Hack. MERRY CHRISTMAS from my table to yours! Let me know if you have any questions, see anything you think could be changed or added to, or want to make your own character sheets or vehicle sheets to go with the theme.

I’ve had a blast putting this together over the last few days. Learned a lot by DOING – take some time to break away from whatever might be holding you back and just go after it

Also it was supposed to be set-up to be a 2-page spread PDF for viewing but because of the way I formatted it, the pages are off-set and it didn’t work (specifically 16 - 17 and 18-19; they are supposed to be side-by-side to show how the sheets work).

Looks cool, thank you for sharing it!

I totally get the decision to balance things by giving non-jedi more points but I gotta ask why Vibro Blades deal ultimate damage where as Light Sabers seem to be inferior to them? Not a critique but more interested in the design decision behind it. Is it to balance them since Light Sabers are easier to conceal and the assumption that Gm’s would allow them to be used to cut hulls or blast doors open?

Another design question is about the species, I kinda like the rather bold move to ignore any and all species based stats or abilities but at the same time I, personally, find it rather hard to let go of such concepts. I have a hack that has been brewing in the back of my head for a while now but I have a hard time to let go of such concepts myself. So the question is how did you arrive to the decision to treat them only as background flavour?

This rules. Just enough to get a game running, but lots to draw on.

I really love your detailed explanation for ships and LOVE the ship “character sheet.” I am running Altered State but I think I will steal that alone just to have a useful tool. I also love that you just dropped races all together. It makes it much easier, and unless the alien species the player wants is really out there, just let them have natural abilities (I.E. “I am playing a Mon Calamari, so I am amphibious and can breathe underwater or on land”).

Oh, and the stormtroopers in squads of 3? Excellent. I am turning my Corporate Security guards into that exact stat block for AS now.

Really good stuff. Thanks for sharing!

Awesome, my son will love this! Thanks for posting!

Vibro Ax – > I picture these being used by wookies and gamorreans – the ‘big guys’ of star wars who, in theory, should deal ULTIMATE on STR rolls. Plus BLASTERS – star wars, to me, is a ranged game. I wanted a big close quarters weapon that mattered. And it’s a Vibro Ax – a big, hulking, humming ax. It is pretty darn obvious if you have one strapped to your back while trying to sneak into an Imperial base.

Effort – > if you take the vibroax, you have to decide if you want to put bonuses in ultimate. It is a tough choice because then what about the blast rifle you find that deals weapon? If you go ultimate and later don’t want to use the ax… Well you padded a stat you don’t need as much. Same for the lightsaber. A Jedi only really needs to put their bonus in one effort spot which makes the lightsaber more in tune with their force powers. It is cool that you already realized they can cut hulls and blast doors without any need to write it out. At one point I did and then was like – it’s Star Wars! Some of the stuff you just don’t have to write. People already know the lore.

Species – > Racism. Like for real. One day I started to look at RPGs and was like “who says all halfling have ‘x’?” It’s bogus. Inherit traits, to me, are a lie and I didn’t want to foster that. Plus if you break down a lot of systems, it comes down to like 10 points. I also made up several mock characters and realized 10 points isn’t really that many because of the 11 STATS and limited gear ICRPG encourages. It is a way healthy spread. Also COVID-19. Virtual gaming is a different beast. Having abilities just feels clunky to me. Like it is another THING we have to manage in a world where I can barely remember what day it is. I wanted to keep it super simple for new players who tend to look at the Pathfinder 2e character options and vomit

I did something B often suggests – I started by making a character RAW and then built the game concepts around it. I really like the fantasy grounds star wars starter box adventures so I used their pre-made characters; a scoundrel, a gladiator, a bounty hunter, and a service droid. I created suitable gear for them and assigned stats where I thought they should be. I did this first as a straight up ICRPG clone with bio-form perks and a milestone. Then I did it as a core 2e quick start version. Then I did it how I felt it would flow better at the table and was like, “Yep – that’s how I want to play a game.”

At the end of the day – I ditched the race and classes because it just felt like I had to check my sheet more than I played the game. I wanted something where when another player is taking their turn, I am watching and listening; not planning my turn.

@BigGrump re-the formatting, if you insert a blank page after the title and before the acknowledgement page, i.e. This inside front cover then the pages 16-17 and 19-19 are displayed as a spread as intended. The page numbering is off in pdf but not once printed.

I am using Affinity Publisher and for some reason the first page can’t display as a double page spread (or at least I haven’t figured out how). When I tried inserting a single page after the cover page, it messed up the entire file and off-set all of the pages even more. I am still figuring this all out on my end. I use the software to export it as a PDF and then uploaded it to my google drive to create the share. I guess I could use adobe acrobat to add the page since my end game was for PDF viewing – double page spread view.

I love Affinity Publisher. If it helps, in the Document Setup you can change the Facing Pages to start on the left instead of the right, which will give you a double-page spread first.

Alternatively, you can just uncheck the Facing Pages option and then all the pages will just be single page spreads. 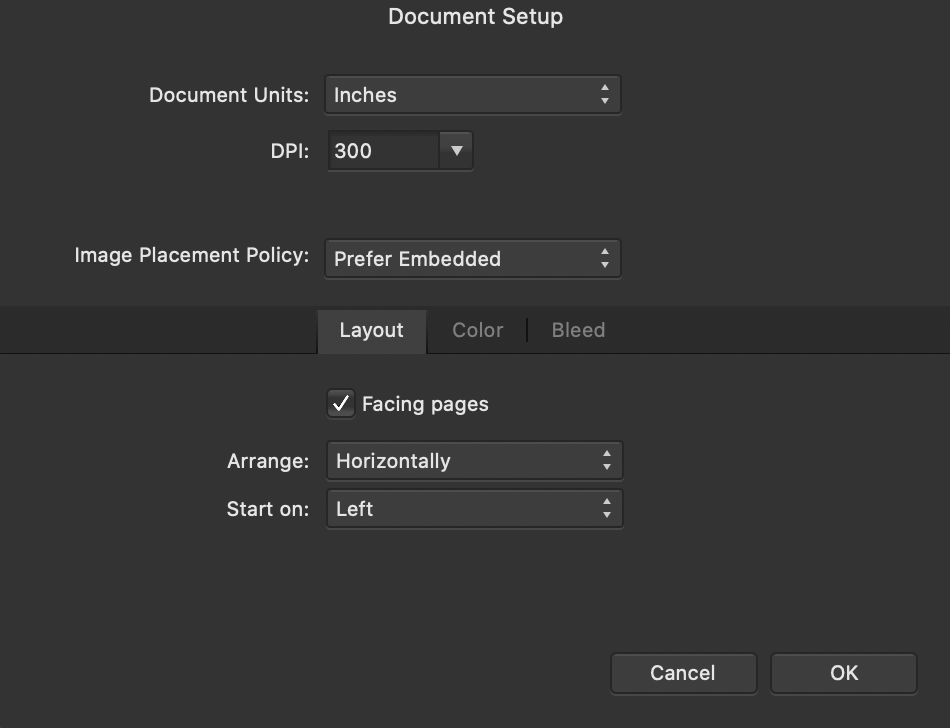 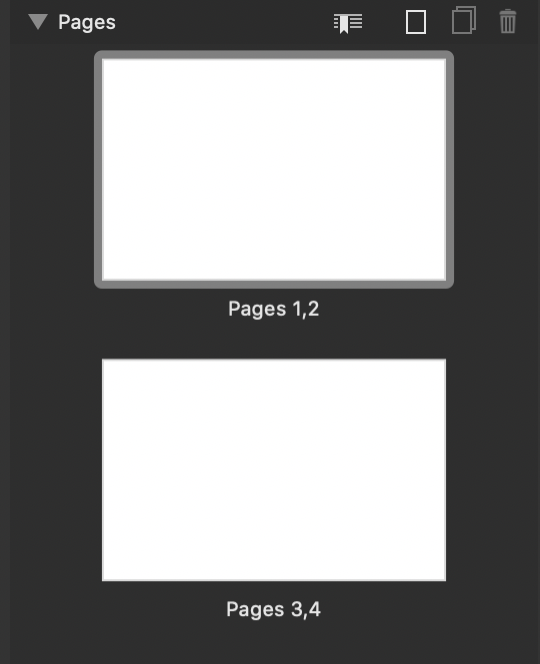 THAT might do the trick! My issue isn’t affinity as much – it is when you open the final version as a PDF. I designed it using the double page spread but then when you download it since ‘page one’ is technically the cover page, it breaks the formatting I was going for as a tool for the users (left page describes the right page).

I will look at the the ‘start on left’ option and see if I can’t get the blank page inserted on my doc. It kept pushing it into the next double page layout which wasn’t what I wanted!

I’ve been planning a Star Wars campaign and was also thinking of dropping the race and classes in favour of a 10 point build, I’d be interested to know how you or others have found it?

I’ve played it twice for testing. Both times went great. Once with adults and once with kids. I added the extra ‘ship’ actions because I found players who didn’t role play needed more guidance on what they were allowed to do.

We did not do an extended campaign but both groups ‘level up’ mid adventure and it was super clean // done during a session break mid-session.

I used the FFG (fantasy flight games) edge of the empire starter box adventure and converted it to ICRPG. It has a lot of diversity; combat, social encounters, world flavor, and a space escape. It is worth the buy and I have also played that using their rules multiple times but that system requires a lot of additional GM work due to the way the ‘story cube’ dice mechanic works.

Hi @BigGrump, this is really great! Do you have any details on how ship combat works? Do you just decide on the fly which chunk of the ship is targetted/hit by the enemy?

Players assign damage to whatever chunk they want. It can be spread out across the ship. The weapons are beefier too which opens up the door to wide damage spikes. It doesn’t take long for a medium ship against 3 tie fighters to be in trouble.

Fantastic stuff! Thanks for sharing

I really love this! Can’t wait to throw a wrench in my Alfheim game with things from this popping up in there. Imagine a freighter landing at Grey the City of Kings! That’ll definitely get the attention of the party!

Thank you for sharing this! It’s really top notch.

I just wanted to add this – ship actions as written are not necessary with a solid table. They are more of a ‘hand holding’ list to help give direction to people who might not be as inventive or want a little more direction on what is possible.

Really the best way to do vehicle combat, in my opinion, is exactly as if they were their character but as a ship with CHUNKS. All the same rules but put them on a big map they can zip around with no range restrictions – treat it like chess. When you stop moving, you can’t move your token anymore BUT while you are moving you have free reign of where you are going to land. Weapons can still have ranges. Movement should intentionally be exaggerated to let players feel like they are in fast moving vehicles.

Just wanted to add that since the vehicle rules do add a little more book keeping than I believe is really necessary (each player really needs them in front of them at the table). When I tested this, one group was all kids and the ship action list was for sure needed to help guide them.

This is the way!
Can’t wait to try this…Would you recommend using the new D8 guns for blaster damage or the old D6 weapon damage?

May the force be with you…

D6. D8 is The Force and while it makes the player more powerful, you want to pair it with Imperials hunting them down for using it or using spell burn (D4 cool down on uses) if you find it fitting to the story. Like the force user rolls a nat 1 while trying to use The Force or a Sith shows up and shuts them down.

We played this several times now and it has always been fun as written. I have an older version (I think it is on here somewhere) that is more in line with the MC edition but before there was an MC addition. That one uses a milestone and an ability tag along with a bio-form.

This was my rewrite. I found this to be much faster to get up and running with new players and reduced the headache of abilities. It made the system feel more open ended too when it came to characters making who they wanted to be.