Spellcrafting and Words of Power

So in fantasy we have the well-worn trope of the wizened wizard, poring over moldering tomes of arcane knowledge, scarcely seeing the light of the sun for days on end, hungry for new forms of knowledge and power. We also have the image of the adventuring wizard, being heroic, slinging spells, armed with staff and sword, dagger and amulet, demonic skull and curled fingers, nary a tome in sight - maybe on a belt, or hidden in a pack. And what is playing this weaver of the arcane like? Pick from a menu; here is the spell list.

Now, maybe you’ve tried power word magic - proposed solution to the doldrums of the stale and tired spell list. Are the words connected to the wizard’s tomb, or some other item? Yeah, sure…sometimes - or not. Just let the player come up with something cool using their words, and let them shine. Of course, that also means stopping everything to adjudicate the spell your player just made up in the middle of play, potentially stealing the spotlight and halting the action - not very magical.

This need not be our fate, my friends. I propose a simple system that give the player the creative space to craft their own spells, and the motivation to seek magic grimoires, curios, and objects of arcane power, but doesn’t stop the show to allow them to do it. The system I propose puts the magic words into books, which the wizards study to learn, and use to craft their spells between game sessions.

Let’s get into the guts of this system, and see how it works. We’ll start with the grimoire - the spell book. Each spell book gets 12 associated power words; these are the magical lessons contained in the pages of the book. Words from the titles of spells are a good source for these sorts of words, but it’s your game, and you can include any words you like. Through study, a wizard may become an apprentice, journeyman, or master of a particular book. For every level, the wizard learns 1d4 random power words associated with the book they are studying. Learning these words takes a season (as in Spring, Summer, Fall, Winter) - and certain words may be more likely to be learned in certain seasons, if you feel that fits the theme of your game. Also, if the wizard does not like the words that they have learned, they can spend another season in study, and try to get better words. If this is too much down time for your game, you can adjust the time of study.

Once a word is learned, the wizard may write it into their own blank grimoire. Any words they know can be combined to make spells, but a wizard can only cast spells that they either have memorized, or that they are wielding the book that contains all the words of the spell; if they are casting from their own grimoire, they can cast any spell which they have created from it without spending time looking it up. The grimoire is a two handed item (doesn’t have to literally be a book, I guess, but probably should be big and bulky). If casting a spell from another wizard’s grimoire which they have studied, roll a timer to see how long it takes to find the proper passages. This way wizards can collect knowledge gained from other sources, and add them to their own spell book for ease of use (but that real estate is limited), or add the other tome to their library. Finally, a wizard may have memorized (and I mean literally memorized - not Vancian memorized-until-cast) a number of spells equal to their INT score for ICRPG (that’s the INT modifier in 5e, and its derivatives), which they can cast without a book, but which may still have material costs or requirements depending on the parameters of the spell (GMs could also make casting EASY if certain materials are expended, or implements employed).

When a wizard is just starting out as a PC, I’d go ahead and give them 3-4 words of their master’s grimoire. They are literally an apprentice of their master’s book, and those will be the first lessons contained in their own book. Now, how many spells can they make with those 3-4 words? That is between them and you. The important thing is that spellcrafting takes place outside of table time. So that the wizard player and the DM are not hashing out the details of how each spell works while other people are waiting for their turns to come up, it is that strict policy that wizards cannot make spells on the fly; in terms of the fiction, think of it like writing a play or choreographing a ballet in moments - it’s too complex, detailed, and risky a task to do in such a short time. In terms of the game, it’s just a way to keep the wizard player from hogging the DM’s attention, and that’s better for everyone.

Spell scrolls contain all the words in the title of the spell, but studying a scroll a wizard may only learn one of its associated words. That said, the wizard can just cast the spell right off the scroll - convenient, but can get bulky (and let’s not forget that scrolls aren’t waterproof, so adventuring with your ancient knowledge is risky). Spell scrolls take a month to study, and no, you cannot study while adventuring (or maybe you’ve decided you can; it’s your game).

Curios are items like wands, rods, staves, and other miscellaneous magical items which add a word of power too spells. Each curio has one word; the wizard cannot learn the word from the curio, but can apply its word to all their current spells. Be forewarned, this can get us into that spell design on the fly territory that we were trying so hard to avoid up above, so my advice is to either make the wizard figure it out in down time, keep the effects of the curio super-duper simple, or don’t put such items in the game.

In terms of spell design, what you allow a word to do and not do is up to you. There’s some good advice in the Magic section of Master Edition. It’s going to be a conversation, and remind your players that you as the GM have the last say, but if something doesn’t feel right, you can also adjust it after the fact. It’s magic, and it can be a little wiggly (just don’t be a doormat).

Hope this might be fun for some of you and your players!

Very cool take on the words of power idea! Would love to see a functioning implementation of a spellbook if one exists, but it’s definitely going on my “to tinker with” list.

Haven’t had the opportunity to try it out yet, but I’m thinking about giving a player an opportunity. I’ll let you know how it pans out.

I have recently been introduced to the idea of magical taboos - things the magic cannot do, or perhaps can only do at great cost to the caster, and I’m musing on how to incorporate into this system. I’ve glanced at this link as brain fuel for the idea:

Made my own “My Magic Cannot…” table. Thinking every grimoire and curio should have one. 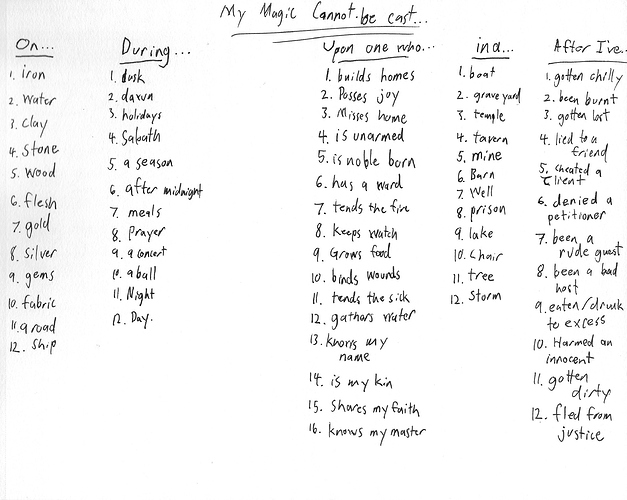