This is my idea for a session where the adventuring party gets involved with a brutal blood sport called Skull Bowl! Basically it’s a sport where two teams of five use a skull instead of a ball and try to run it into the opponent’s end zone by whatever means possible. I’ve not worked out all the details but I’m sure you crazy brilliant people will have some ideas 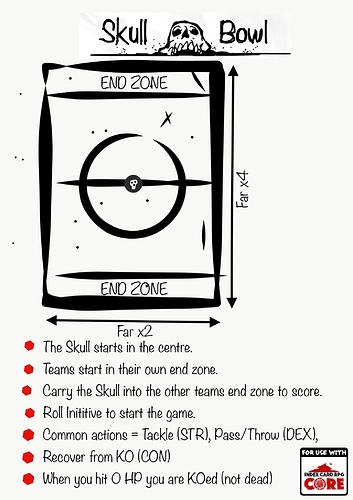 Thematically very cool, and mechanically if you aren’t having players versing other players, then the mechanical rules are a lot less relevant, or at least there is no need to be really balanced.

Is this in a fanatsy world? can people use spells? what is considered cheating?
Is there a team rocket equivalent that always cheats and tries to get away with it.

My fencing group has a game very similar to this called Dog’s head. The only difference is that one person on your team is the Quick and it’s their responsibility to grab the ball and get it across the line. They’re the only ones who can touch the ball so everyone else is trying to defend their Quick while simultaneously trying to defeat the opposing Quick. Oh and did I mention the Quicks are unarmed?

Edit: I think the game is inspired by the movie Blood of the Heroes aka Salute of the Jugger.

I initially thought fantasy but I suppose you could apply it to other settings too. I’d probably go with no spells or weapons but that’s where cheating comes in, what the ref doesn’t see won’t hurt him or maybe it will

Having a Skull Bearer (Quick) could also work, but then I do kinda like the idea of throwing the skull around

So is this like a soccer game or more like hockey? how many points do they get for scoring? Interceptions? rules? what about just taking out a player that does not have a “ball”? weapons? Magic? these are the questions I can think of now.

It can be whatever you want really but in my game it’s more like Football (American), 1 point per skull delivered into the end zone, magic and general weapons are not allowed (but hey people can cheat

) my players will be given the “standard skull bowl armour and brass knuckles”. Taking out a player without the Skull is completely legal. Interceptions are a good point that I am now considering

(WIS to see the ball going over your head + DEX to catch it?

Oh my god! I watched that movie with my dad on VHS and many times I’ve tried to find out what movie it was. Thanks for solving a life long puzzle that nobody had a clue what I was on about.

You’re quite welcome! I hope it’s as good as you remember if you end up watching it again haha

Love it! I’d been working on something similar…it was in an apocalyptic world and it was called “ZOM-Ball”

The playing field had zombies attached to chains on either side and so not only did the players have to get past one another, they had to worry about getting too close to (or being pushed/tackled into) the ravenous zombies straining at their chains.

Of course, the chains could/would be let out a bit longer as the game went on, and completely released in “sudden death overtime”

Nice! I like the Zombie idea. You should throw in some randomly placed land mines too

In my best commentators voice:
“He’s got the ball, he’s through! Jukes a zombie! He’s heading for the end zone, oh my gods this boy can“…BOOOM!!! “Ooooh watch out for them land mines kids!”

Very cool. I designed a board game a while back called Dungeon Ball which is based on this kind of concept. Feel free to borrow any ideas from that. https://www.kickstarter.com/projects/gabebarrett/dungeon-ball

There’s also a PnP version on that page.

Yes that’s what I was after!

I wanted a blood bowl style game but in the ICRPG universe. Your game looks great btw, damn it! I’m now gonna have to buy ANOTHER game

I love this. I think it’s going to work great in my setting. Stealing it for sure.

I’d love to hear how it goes