A long time ago (like 2-3 years??), @DMChef posted a pdf of his Mapless Maze Maker rules. At the time, I downloaded it, saved it & never thought about it again until last weekend.

My players were fighting back sea monsters from a fishing village & my son declared that his character grew up in the swamp nearby & knows the sea creatures language “they’re looking for their lost magic stone!”

The quest for the missing Mcguffin was on & I needed a dungeon quick! That’s when I remembered @DMChef’s Maze rules. I pulled them up, made a couple quick adjustments to fit our group & 5 minutes later we were all exploring the basement below the wizards tower! 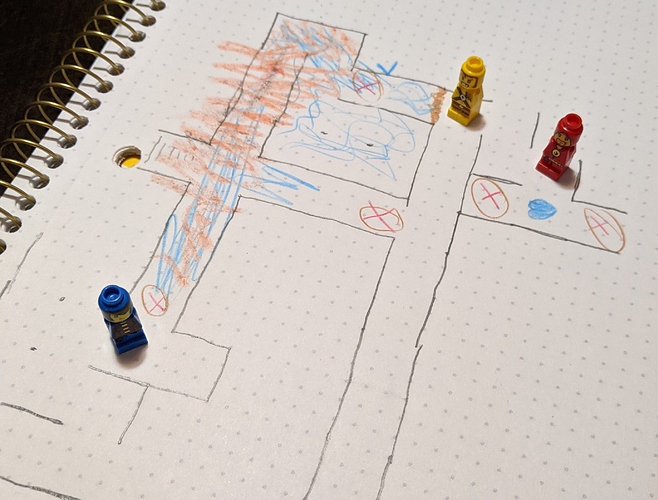 We had a great time! The orange & blue scribbles indicate where they set fire to part of the basement then put it out using lake water! They found the magic stone, returned it to the sea creatures & saved the town!

I guess this is all a long way of saying “Thank You” to @DMChef!

Thank you very much but the credit goes to Runehammer, I just wrote down what Hank said and tweaked it a bit to make it work.

I have used it countless times and is a great asset in my toolbox. I’m glad it worked well for you.