First some context. Players are in a vaguely mythical Chinese like setting. The players are on a quest to fulfill an ancient prophecy.

The players travel via boat across the Endless Sea following the Red Star. They reach their destination which is a skyscraper size tower, cylinder shaped and made out of smooth dark stone with no visible seams. It sticks straight out of the ocean. The only way in is a magical lock which matches a tattoo the magic user in the party has.

What the tower is: a containment facility for a very powerful entity, purpose built by some long ancient space faring/dimensional traveling forerunner race. Built perhaps millions of years ago before sentient life evolved on the players world.

Overtime the containment has decayed and the entity inside has used its abilities to influence the world around it. The ancient prophecy’s are it’s own making, as well as influencing life and making magic users until the right one with the right key is born and can unlock it from its final prison within the tower.

What I’m looking for: any ideas or published material you might know about regarding a dungeon that constantly moves and shifts, that is itself a puzzle.

Any ideas about a dungeon that is controlled by an A.I. like enity that manipulates the players down a path. How would you folk go about presenting this or an idea like this to the players?

Couple thoughts I’m having, using the matrix as inspiration and putting something in the reality of the dungeon that gives a hint that the world they see isn’t the truth.

Or just straight up saying outright in some way that this place is under control by some greater enity and go forth with that knowledge.

Firstly I think the idea is cool. Very cool. I think it’s possible with an idea like this to spend forever trying to create a randomly generated series of rooms where some are tests of the mind or fights. And only once certain rooms are completed will the final room, area or whatever finale you have, will be shown.

The downfall to this is quite simply having some kind of mental breakdown attempting to manage all the variables. So I suggest, fake it. Inform them the rooms move, it’s designed to test adventurers beyond what they’re used to and terrible things await them should they choose the wrong paths in an ever changing labyrinth tower thingy.
Eg: give them a blue door and a yellow door. Guess what’s behind the blue door? Your first planned room. Guess what’s behind the yellow door? The same room.

The illusion of choice my friend. Have a room where they get a magic candle lit once they solve a puzzle, hurrah for the players they got the right room!! Next one, encounter in reverse-gravity but theres no candle, if only they would of picked the other door… this is what they will think anyway, but the room was decided before they opened their doritos.

I’m not sure how exactly you are doing your rooms and such but I would definatley have the option A and option B but both lead the same place theory. Maybe they pick one way and you show them if they would of gone the other then twenty giants would of awaited them… How lucky they are! They will feel like they’ve outsmarted the dungeon masters elaborately planned, twenty possible rooms adventure of death and should love it. And worse case scenario… Send in the giants

This is what comes to my mind anyway. Let us know what you do and how it goes.

I’m definitely in agreement with orkcol about the illusion of choice; make it in essence a linear dungeon so that you can create an atomic, iron-forged experience that you understand but put a layer of illusion in how the players navigate it. For example: your players enter a room that seals up, solve the puzzle before the lava reaches the ceiling, etc. They’ll then discover there’s only one way out: the way they came back in, and there’s a new room there. Also a good way to introduce the “non-linear, warped” (despite the truth) structure.

As for inspiration, the immediate example is the movie The Cube, which is about a group of people that wake up without context in some sort of subterranean puzzle structure where the rooms shift and change, sometimes containing death traps. The concept in the movie is perhaps too ambitious for a full realization in a DnD campaign, but I think certain scenes and traps of the movie could be great inspiration.

I think a cool idea to sell your point about the dungeon being this ancient, immaculate death trap could be that they meet a character that has a unique claim: they are the only person to have broken into the tower without being the chosen one. However, they got lost, and so they join your party, but it slowly becomes apparent that they’ve descended into madness themselves and will become a foe.

I’ve done this a few different ways and I can say without doubt that you need to make a paper prototype to make sure it doesn’t “break” when you start moving things around.

Those are the most important bits to do when building a dungeon with moving pieces. I tried to find more pics of old notes, but these were the only ones I could find: 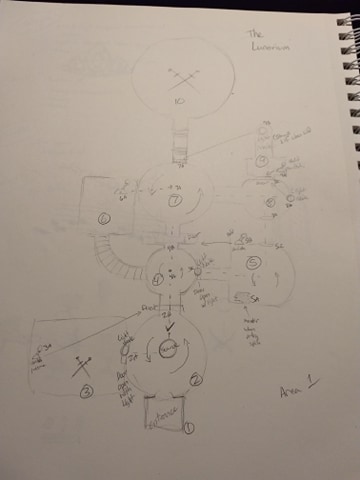 This was the third level of my initial Lunarium design. Players had to pivot beams of moonlight reflected through crystals to certain points of the dungeon. As they went further, the puzzles became more involved, including splitting the party to hold open doors with switches, activate others in sequence, rotating pedestals, or rotating walls. I couldn’t find my pic with all the little “On”/“Off” pieces of paper I had all over it, but you can probably imagine. 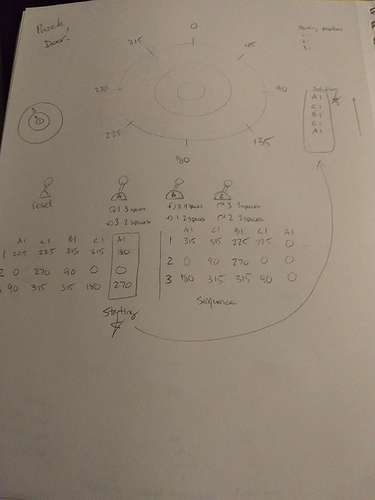 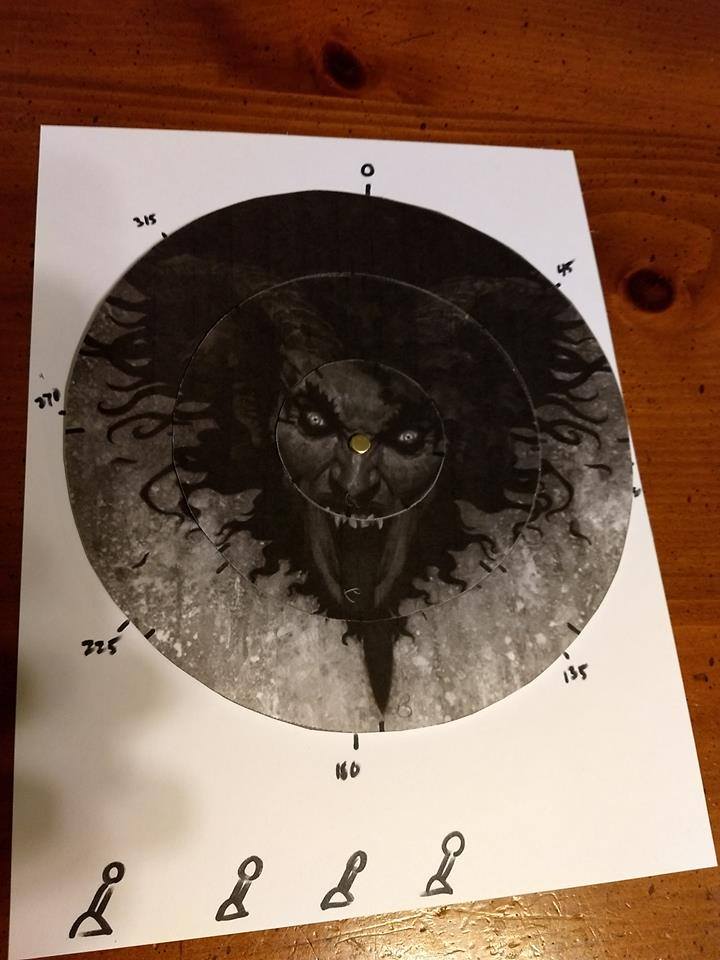 This was a puzzle door I built using 3 rings and 4 switches. Each switch moved 2 rings a certain number of angles around the center. It was measurable, consistent, and touchable, which made the puzzle actually do-able. Only 3 switches moved the rings, 1 switch was a “Reset” switch that moved all the pieces back to their original orientation. That reset switch is pure usability made to help players get their bearings, know they wouldn’t get lost, and let them play with the puzzle without worry of it becoming unsolvable. I think that element is critical at the table. The pic of the face is the completed puzzle, art by Brom.

For the one I can’t find my notes on from years ago I used a Rubix Cube as a reference and built around that theme of movement (the color aspect of the cube was a non-issue, just studied the movement and positioning). That dungeon was on the inside of a massive golem. I had just played Shadow of the Colossus and was friggin PUMPED about it, haha.

This is just my experience/opinion so far and is subject to change with my exposure to new ways.

Thanks for the replies.

Illusion of choice is definitely the way to go I think.

Also, using the film the Cube and the movement of rubix cube are really good seeds of inspiration.

As an extra, I believe five torches deep has a rubiks cube dungeon generator toward the back. May be useful.

If you can find it, have a look at the board game Master Labyrinth for a really simple tool. Its a game where you navigate a dungeon that uses sliding tiles to re-arrange itself between each player’s turn.

This has been super helpful for me and I’ve applied it in a bunch of different ways. Skip to the 4 minute mark if you want to get right to the point. He does a better job at explaining but Once you’ve watched it come back and I’ll give a hasty version of what I do at the table.

Finished the vid? Good. What I do is draw circles on the board (I use a huge whiteboard) with the number you could roll (let’s say 1-6) and a short description of what is there 1-dead end, 2-long hallway, 3-monster, 4-exit, 5-trap/encounter 6-dead end. Any time they want to try to move to a new location they roll (1d6 for this example) and move their character to the corresponding number. I will sometimes grant EASY rolls where they roll and can add or subtract 1 from the result thus giving them more of a choice on where they go. For HARD rolls I have them tell me which number they want to go to and if they happen to roll that number they have to re-roll once and use the new result.

At first I thought this would really take them out of the game since you can’t see where you’re going or choose but with a maze (or shifting rooms) that’s kind of the point and they have really loved it and the tension it builds especially if you’re using timers. You think you’re going in the right direction but you could be wrong and that could cost you dearly.

So if you wanted shifting rooms you could give each room a number 1-lab, 2-cells, 3-mess hall and so on. Any time they want to go to a room they have to roll and since the rooms are moving they might not find their way to where they want to go. The hard part is making sure they don’t feel too frustrated by feeling like they are burning turns with bad rolls which is why I use the Easy and Hard and try to have a monster,encounter ore even a generic “hallway” where I can throw in random stuff.

I hope this helps

As far as wanting it to feel like it’s being controlled by a greater entity you could roll any time they do ether behind the screen if you want to have the option “nudge” them in a certain direction (you could always roll EASY so it’s not just you railroading them but still gives you some control) or blindly under a cup. They then get to choose to use their result or go with whatever you’ve rolled.

I ended up using an idea I found in the LOTFP adventure module The Monolith Beyond Space and Time.

Once finding a way in to the tower they find themselves in a never ending hallway with no where to go until they start saying things like “I want to find the door I came in” …and there it is right as you turned around. This lead to some interesting encounters as I let them essentially create and then navigate this place. Near the end of the most recent session they started thinking about going back in time to when this was built in order to solve a situation they are having trouble dealing with in the present, so a new door appeared seemingly leading to the past.