Hey guys, i’m sure you’ve all played you’re fair share of rpgs where wearing a full set of gear gives you a certain bonus, i’m aiming to make a collection for set items for ICRPG that would be easily incorporated into any fantasy setting. Sci-fi and cyberpunk set items may be something i work on in the future, but for now fantasy is the main genre i play in currently that’s what i’m focusing on for this first batch

Setting a personal goal for myself to make 6 sets of gear(20 items) fully arted and written up into the iconic icrpg fashion by my birthday in april. I’m hoping to get input from this lovely community on effects or abilities they might have, as well as some names and themes for their look and style.

The goal is to release them as INDEX CARD sized items (inspired by the relics of odium) which would be quick references to the bonuses they give, the front side would have a depiction of the item and its name, while the back would have the stats and abilities the item grants you. The hope is for these to be fully printable for your table games onto card stock.

The main premise i am working to achieve is that one item from the set gives you a unique ability, and wearing all of the set improves that ability. However there’s also some abilities i feel are more a set piece then a single items, so its really kind of a mixed bag with what i have for brainstormed ideas so far, which are listed below! I like the idea of some sets having more / less items then others depending on their type / rarity / story / etc so let your creative juices flow! Stories regarding each set to be added as well.

Elrics Set (not set on name/not set on theme)
red / gold / white colors
Elric’s Scarf ; DEX +2
Elrics Gloves ;
Elrics Scarf Mask ; A mask that covers the lower half of ones face, smelling through the mask makes checks to determine creature species or type are easy, while wearing full set, you know without needing to roll.

Leoben’s Set (needs a name/theme)
red / black / gold
Leoben’s Bracelet ; Once per day, Resist magical damage by half dealt to you. full set; once per day, resist all magical damage dealt to you.
Leoben’s Hood ; Disappear into your hood, becoming a small leather ring which is totally inanimate, this form lasts for up to 1d4 rounds or until released by caster. Full set; this form lasts for up to 1 day or until released by caster.
Leoben’s Ring ; INT+1. Full set; Once per day force a reroll of an enemy spell attack targeting you or allow for a reroll of a check against a spell effect.
Leoben’s Earrings ; When rolling a 4 or more on your spell timer, re-roll, second result must be taken, full set; when rolling a 4 or more on spell timer, reroll any rolls of 4 or more.

I love the Raven set or the Elric’s Set (Didja know Elric might get a show on TV? :D)

For the Raven set you could name each pieces for each Raven in mythologies, and each of them could give bonuses related to each raven’s goals or powers!

As for the Elric set… well… perhaps something regal? The Crown of Aurioch, the boots of Earth, the cape of water, etc.? Each item related to his adventures or companions?

I’m not sure if i want to specifically name each set piece just for the sake of clarity with them. If it’s titled Morgane’s Pendent, you know its part of that set, but if its called Muninn’s Legendary Talon (which sounds so much cooler) you dont know if it is or isn’t unless you’re reading the back info, or more likely the piece that gives you the info on the set. (how i plan on labelling; one item will have the ‘reward’ for wearing each piece of the set, the others will have part of the story or a quick one-line snippet about the lore of the item / wearer)

Malacaths and a name for the Valkyrie whose set it is ( ______, the Valkyrie’s Set ) are my biggest dislikes for the names. Odin’s i also might make something like Three Brothers or something that’s more derived from the Ve, Vili, Odin brotherhood

first draft of my first item 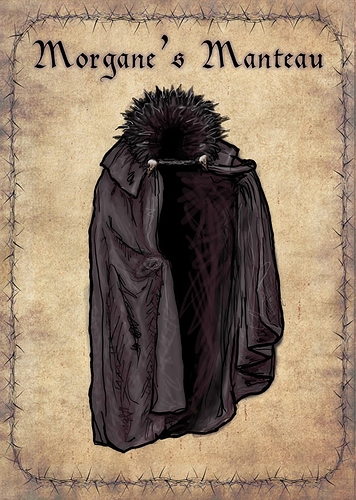 Morgane was an enchantress/mage right? I feel as a player I’d be disappointed to find those items and them not have stats and abilities somewhat relevant to a caster.

Personally I’d go further and have the “special” set ability be something based on lore, or very unique, well suited for casters:
Eg. Turn into giant raven for 1d4 rounds
Eg2. Omen: roll 2d20 at beginning of the game. You can switch those rolls for any other d20 rolls at any time (stolen from 5e :D)

Very nice art and nice idea.
My top tip: do one set at a time

Epic art, I love it!

This is relevant to my interests. Do you have any preliminary thoughts on sci-fi or cyberpunk sets?

I can envision something like “full ranger’s outfit” with smart tactical pants, shirt, gloves and helmet all providing synergistic buffs. Or a weapon system made from components that combine to increase accuracy / range / damage / whatever.

What else, though? I’d love to start dropping some hints about these kinds of things to my players, so they can start looking for them! 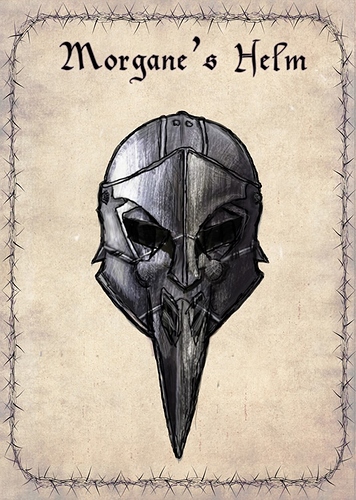 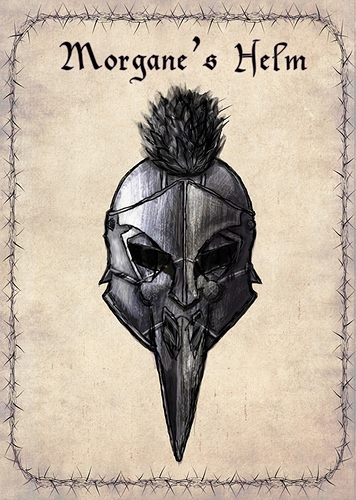 @Ardon Morgane was a criminal! A quick summation of his story is that he was an informant and witnessed something shady go down that the people he worked for corroborated. He started to play both sides and got into a lot of trouble for it, eventually becoming a high ranking member of the underground, think of him as the robin hood of critical information, loved by the people and feared by those who had secrets to keep. I’m probably going to have a short 1 - 2 paragraph description for each set of how the items either came to be or the wearer’s story and how it became legacy

So the morgane’s stuff is mostly directed towards ranger/rogue-likes more than casters, but i could definitely see an up front caster using this set to their benefit too!

I dont have any preliminary insights other than physical mutations along with bio-mechanical ones, things will probably be smaller (a replacement eye, a lockpick that extends out of a cavity in your finger, an inspector gadget hat, also pheromones? cus that’s fuckin cool haha) But i really am focused on these fantasy ones for now. I may take some insight from bearcats and AS (when its fully released) though which is another reason why i’m not as ready to jump into cyberpunk gear, i need to know how the game functions comparatively and i havent delved too much into the sci-fi gaming scene, i am running a couple games and have loved a few of the adventures out of the books and XDZ, but i need to get more immersed in the genre before i start thinking about that kinda stuff =)

Yes, that totally makes sense. Could go a step further and make it about “stealing info” in some way as well? 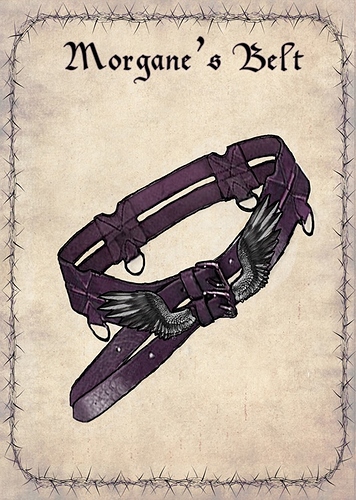 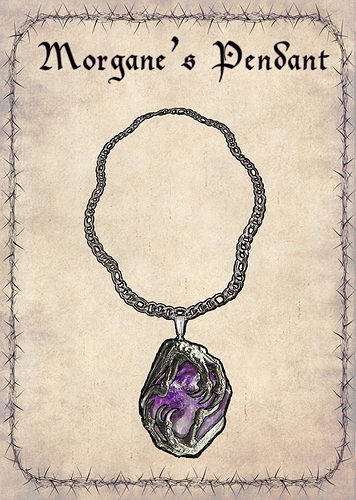 also ardon i really like that steal info thought, so i’m thinking an ability like “once per day you can auto-succeed a listen or lip read check”

Ooh that’s nice. Expanding on that:

If players (like me) don’t like once per session abilities, just make it usable any time but beat the target.

OR once per session: learn a secret of the target/group (in the form of a looted letter, overheard conversation, little clue like notice a strange stain/muddy foot prints/strange emblem) - that’s fun for story progression

Hey guys, big update here it’s been a while but i figured i’d let you all in on the progress, if anyone has suggestions please feel free to drop, love to hear input from community! Morgane’s pieces are listed as they will be on their cards, i’ll also be adding a short description of the individual whom the set is based off of, but i’m gonna keep that a secret until it’s art and rest are set! Thanks all so much for your input thus far!

Morgane’s Set
Morgane’s Helm; checks to impersonate another creatures voice are always easy
“His mask made him a better mimic than a well trained raven…”

Morgane’s Pendent; checks involving LISTENING are always easy
“It whispers sounds from all around, through this he’s always listening…”

Morgane’s Belt; when attacking from stealth roll DOUBLE effort, full set; TRIPLE.
“The scabbard purposely designed for silence when he was drawing from it…”

Morgane’s Manteau; ABILITY; Combat Maneuver, when an enemy attacks you at CLOSE and misses, you can make a reaction to move NEAR, if wearing full set you can move FAR.
“He danced around the battlefield as a shadow chases the sun, vanishing then cutting…”

Emmitt’s Scarf Mask ; A mask that covers the lower half of ones face, smelling through the mask makes checks to determine information about creature species or plants, age, value, (be creative) or type are easy, while wearing full set, you know without needing to roll, Creatures & Plants

Orwin’s Necklace ; Once per day, take no damage from a spell, heal the amount of damage dealt. Full Set; reflect the spell back at the caster when you take no damage.

Leoben’s Ring ; INT+1. Full set; Once per day force a reroll of an enemy spell attack targeting you or allow for a reroll of a check against a spell effect.

Valkyrie Manteau ; Once per day grow wings that allow complete flight for 1d4 +1 turns. Full set; use at any time, still last duration.