Really cool ideas here! I like the malfunction bomb and the foam grenade. I just had a player install a forearm mounted grapple gun too, I think they’re enjoying it.

Little can be more fun than some hook shot/bionic commando action!

Cool ideas! I think your vision of the holo projector is more of a wrist model. I will add to the list, with minor modifications.

sure, I was thinking of the Star wars “phone” ahah, but maybe I missed t your point

I was going for more of a sci-fi illusion spell.

I think I like the idea of rusty exoskeletons, I would expand on that

As I imagine them, they should be strong armor but that consume your lifeforce, so with some drawback that maybe can be shared by all of them. Like strong and cursed armors.

Getting a strong Deep Sky Derelicts and or diesel-punk vibe from these.

Here’s a list I made a long time ago in one of my GM journal, most of them (if not all) are inspired by popular sci-fi:

Ooo, hover board gave me an idea!

Great list. Here’s my alternate entry for #30, which I was working on before you posted your definitive one.

Your cool creation makes me wax nostalgic for the needler pistol in the old-school AD&D (1e) dungeon module S3 “Expedition to the Barrier Peaks”! 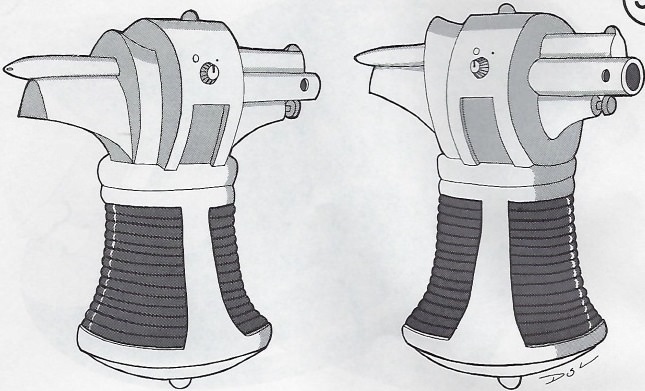 This powerful, electromagnetically-operated handheld projectile weapon quietly disperses tiny finned duranium needles in a burst of five sequential quad-bundles (each bundle is one “round” with four splinter-like projectiles) at a high rate of fire using portable rail-gun technology. The gun hits its intended target within FAR range on attack roll that matches the target’s DEF score (or the encounter target number); an additional hit is scored for each count the attack roll exceeds the target’s DEF, i.e., (ROLL+1)-DEF = # of hits, with a maximum of five hits from a burst (a single attack action; e.g., a roll of 18 scores 3 hits on a DEF of 16). Each quad-bundle hits for D4 points of piercing damage, yielding up to 20 points per burst on an a successful attack. The built-in power cell has energy for five bursts—matching the gun’s ammo capacity—and is not hot-swappable, requiring the gun to remain in a stationary charging station to recharge at 12 minutes per burst. On an attack roll of a natural 1, the gun’s power cell overloads, exploding for ULTIMATE damage within a NEAR radius in D4 rounds (1 is an immediate KA-BOOM!).

NB: This weapon would be the pistol-sized, higher-tech electromagnetic cousin to a modern automatic shotgun (like a select-fire version of a Saiga-12–INSANE!) with its mechanics completely and concisely defined by the simple tags “burst 5 (D4 scatter damage), capacity 25, FAR” under the proposed optional rules for high-ROF gunplay I suggested in Pseudorealistic Selective-Fire Gunplay for ICRPG.

Let’s try to turn that into one line for the sake of our players, eh?

GUN damage +1 GUN damage for each point over TN. Explodes for ULTIMATE damage in TIMER on fumble.

Let’s try to turn that into one line for the sake of our players, eh?

Coffee - The Good Stuff - prepare in the ship’s galley, recover without rest, boosts courage and resolve

Speeder Skateboard - lifts only a meter or so off the ground, but makes landings soft and looks cool when you travel. Use as a shield, sacrifice to negate damage from a really bad hit.

#20 sounds like the opening of Heinlein’s novel Starship Troopers—which they completely left out of the feature film, much to its detriment.

As I hit, the Y-rack on my shoulders launched two small H. E. bombs a couple of hundred yards each way to my right and left flanks but I never saw what they did as just then my first rocket hit—that unmistakable (if you’ve ever seen one) brilliance of an atomic explosion. It was just a peewee, of course, less than two kilotons nominal yield, with tamper and implosion squeeze to produce results from a less-than-critical mass—but then who wants to be bunk mates with a cosmic catastrophe? 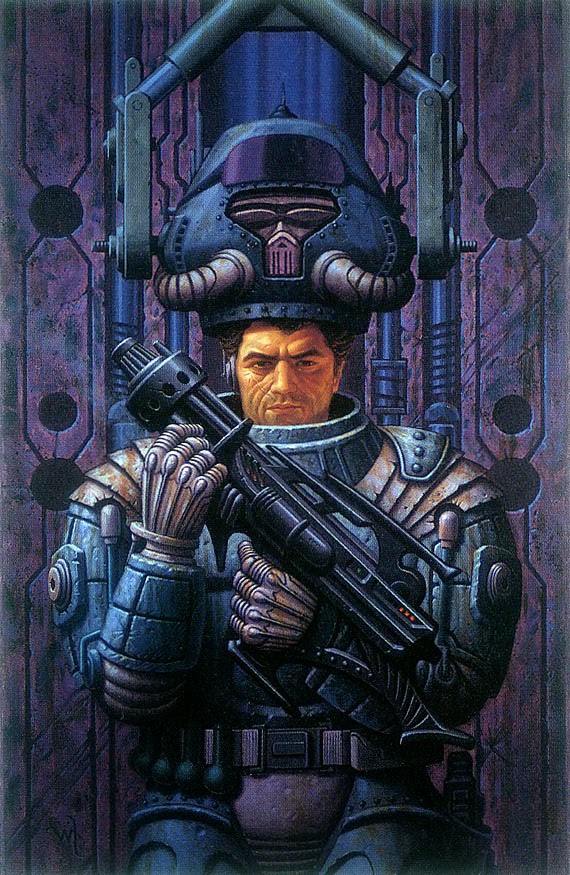 You caught me! One of the few details I retained from that book.

I think I would have appreciated the movie more if I had realized it was making fun of the things Heinlein took seriously.