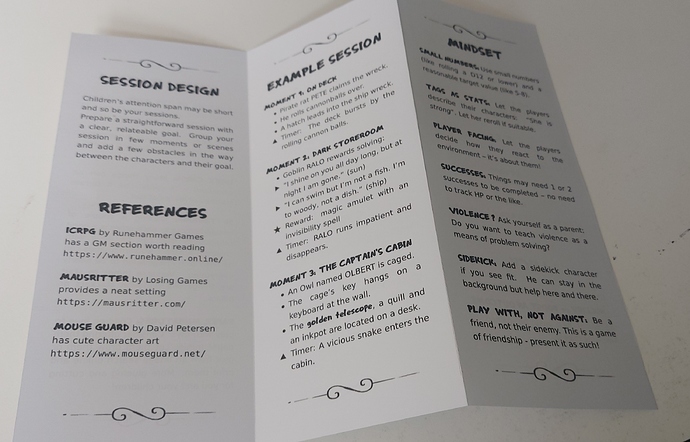 I’ve been playing for a while now with my 4yo daughter and I’d like to share my experiences so far and show you my mindset when it comes to prepping and GMing with her.

LESS NUMBERS: We roll a d12 vs the target, which is most of the time between 4 and 6.
At the moment, she isn’t able to read numbers like “16” and compare that to let’s say 13. Hence, we’re using smaller numbers. In the beginning we started with a binary die with

on it (built from scratch). After that we moved to a boardgame playing d6 (with dots, so she was counting). Meanwhile she recognizes numbers between 1-8 by seeing the number. So we moved into the d12 so she can learn more numbers.

Comparing numbers is also a big thing. When using a “real” die, we rolled for “3 or more” and that worked like a charm.

TAGS OVER STATS: You are strong? Roll again if you don’t make it!
Adding a roll bonus is too much for a 4yo. So I started offering her descriptive tags like strong, fast or smart to allow her to describe her character’s abilities. They simply work like a automatic hero coin

PLAYER FACING: The cat tries to hit you with its paw. What do you do? […] Cool, let’s see if you’re fast enough!
The concept of a Defense stat makes no sense to small children. They want to DO IT on their own (I’m not even allowed to flush the toilet for her anymore

)
Let them shine, let them be heroic.

SIMPLE EFFORT: You repel the cat away from the bird’s nest. Now it’s close to fall from the tree
As Hank already suggested: Effort doesn’t always need Hearts. Going with a 2-step progress is fine. Remember: Rolling a 12 with a d12 should of course count as an extreme success… shove that cat away at once!
Also, avoid HP on enemies or even heroes - unless the kids are ready for that abstract concept. No need to use different dice for effort types. That’s neat but belongs more to traditional ICRPG imho.

SHORT ADVENTURES: Give them a mission, move towards it and hit the climax. Don’t waste time!
When experimenting with adventure design for my regular group, I started to use a 3-part story structure with Exposition, Twist and Climax. That’s nearly the idea for kids play: Given them an exposition scene with a purpose, move them towards their goal in another scene and then confront them with their goal in the climax. Attention spans are short - keep the game in motion and kick out things that are too complex or unnecessary.

SUITABLE THEMES: Violence is difficult to handle. Play with their empathy instead!
This is also a question of parental style: Do you want to enforce violence as a conflict solution paradigm? Can they distinguish between violent in a game and violent in real life? I don’t think I can answer that for you. This point is here for only one purpose: To make you think about it yourself!

PLAY WITH, NOT AGAINST
This is always true in tabletop roleplaying. But it’s especially true when playing with children. In my case, she’s the only player. So be a good player too, and join with a sidekick character that can give tips, question decisions, asking key questions and aid in difficult situations. This is a friends game - present it as such!

And here’s a photo from today’s session climax: 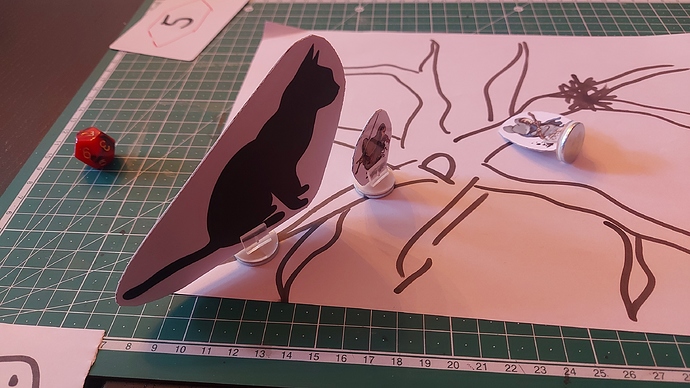 Mouse knight BLILU fought bravely against the huge cat on top of a tree. His fellow mouse DEERIC lost balance but grapped the tree branch in the last moment.

Oh no! If I don’t help you, you may fall. If I help you, the cat will come closer.

Dilemma placed, now watch and learn something about your child(ren)!

PS: After the game, my daughter told me, that this entire adventure way “sooo dangerous!” She was afraid of falling from the tree.

Whoa @glocke! This is epic. I love the auto re-roll. “But you are Strong!” Amazing. This simple post might be my favorite set of rules for kids I have ever seen.

Dude, this is melting my heart.

I absolutely effing love it! All the Hero Coins and an epic digital hug, man. This is brilliant.

First off, @glocke, I think you did a wonderful thing here, and you deserve to be proud. I love it when avid players steward the next generation of gamers into the RPG hobby, and playing these games with our children is really special.

When my daughter, now almost ten, was the age tours is now, we used to play “Dungeons & Dragons” in our garden; this was just me telling a fantasy story after helping her to create a character persona and presenting her with choices, the outcomes of which I would then narrate as they led to more choices. It was great fun for both father and child—no mechanics, no constraints, and boundaries set only by our improvisation and imagination. One day, for our “D&D session,” I brought out a big foam D6 die I bought at the local dollar store, and when she decided upon her course of action, we rolled the die together to determine the outcome. This simple addition set my daughter on a life-changing path. Today the same girl can min-max straight from the ICRPG Master Edition rules on her own; she plays weekly, kicks kobolds and takes names, and is just about ready to try DMing her own one-shot.

RPGs presented and run thoughtfully are great for most kids, even at younger ages. They encourage and reward imagination, and they create a singular environment for developing listening, memory, and logic skills, the very bedrock upon which a child’s foundation for intellectual living can be built by forward-thinking parents. They are also a fun, safe space for parent and child to explore together the nature of the moral imperative and the consequences of one’s decisions and actions.

Playing RPGs with your kids is indeed very personal, and it needs to be. For example, I like the consideration you gave to the nature and effects of violence in a typical medieval fantasy roleplay setting. You tailored your game to present what you thought would serve your daughter well at her tender age. I really respect that. I have always taught my daughter the importance of striving to be peaceable but not necessarily pacifist—because I’m trying to teach her a concurrent lesson about the importance of personal integrity and not being a hypocrite—so I am equally proud of my daughter when she successfully parleys her way through an orc ambush as I am when she collects the head of a beastman wargor as a trophy to send a message to the horde. (All of these choices get talked about when we spend daddy-daughter time conducting a post-session after-action report.)

My point here is, with consideration, love, and a little effort, a parent can use these tools of the roleplaying trade to help children grow and flourish in myriad ways in preparation for real life, all while having some good family fun together. Your kids will learn life lessons with acceptable consequences that can serve them for all their days to come, and they will develop interests and passions in things that will set them up for a lifetime of joy as they come to understand the value of creativity and cooperation. You have certainly proven this by your efforts.

This is fantastic!!! So awesome that you’re getting to spend so real time connecting with your daughter! Well done sir!

Hey guys, I just added a tri-fold thingy with my experiences. View the initial post at the top

Nice work. I have been jamming together different ideas when running for my daughter. I’ll add your ideas to the memory banks. Thanks!