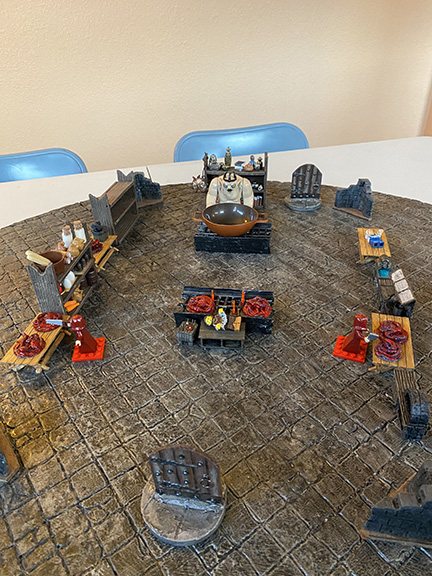 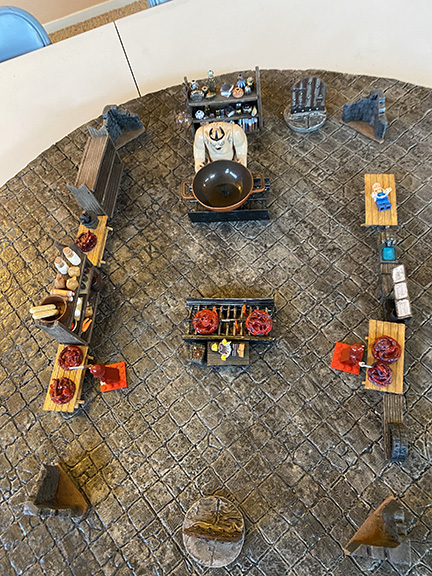 Hey everyone, like to brainstorm some more ideas from you creative geniuses.

So here is the Cannibal Cults’s Kitchen

The Troll Chef: Stirs a giant cook pot and adds random rare ingredients into the mix from the shelf behind it.

Two Cultist Assistants: Shave and hack up the victims in preparation for the Troll’s cook pot.

Fire Pit: Located in the center of the room raw meat sizzles on its grill.

Timer: Every 1d4 ROUNDS a fly swarm spawns into the room. HARD check on whoever is caught in the swarm till flies are removed. 1 HP immune to most attacks. (use fire or something to disperse them)

Each ROUND I want to have the Troll chef toss a rare ingredient into the cook pot and then roll on a random table for an effect. Maybe 4-6 possible effects.

Any Ideas what other effects could happen?

My buddy made a fat cannibal wizard in a game once. He used a large wooden spoon as a wand. He would mumble his recipes for cooking people out loud.

Could add some potent onions and have them CON check or their eyes burn and they cannot see.

He would mumble his recipes for cooking people out loud.

LoL I love this. My troll now doesn’t speak, it just speaks in cooking terms. “Flay the skin and boil the meat”

Blindness for 1d4 ROUNDS is a good effect.

What about something positive, say a culinary herd that is also medicinal. All with “x” gain “x” hit points

The opposite, a herb that is poison when cooked. All within “x” take “x” damage.

Additions to the pot:

Other room-based threats to play with:

@Jkroy
A positive effect is a good idea! Heals enemies and Characters alike. Thank you

@skippy
Lots of good inspiration there. The flies are my favorite, very flavorful and adds to the grimdark tone. Thank you

Love this! I’d love to play in this.

Maybe a rooting effect? The troll spins sticky pizza dough, made of insect flour and leavened with noxious mushroom spores, then tosses it. Hits one PC plus all CLOSE to them. Save DEX or be rooted for 1d4 ROUNDS. PCs can use their action to make a DEX or STR check that, if successful, clicks down the timer.

@Andreas
Love it! Can hear the troll speaking of how it made the insect flour to make the dough just right. Thanks for contributing

How does your Stress mechanic work?

Going to test it this Sunday for the first time. It’s heavily based off the Darkest Dungeon style of stress.

Mothership has a great stress mechanic, too. Sometimes stress helps you, giving you laser focus (huge bonus to hit). Lots of inspiration and ideas to pillage from that system!

Thanks @Skippy I’ll read through the pdf now and see if I can mine any last min things.