Inherited a couple sizes of this and feel like there’s bound to be a use for them in my gaming, but not really able to suss out exactly what.

Which makes me think it’s more just my bad habit of falling in love with yet another “heartbreaker” organization gadget.

So. Anybody on the shield wall found a use for Rocketbooks that would make them worth keeping around?

I just received my first rocketbook for Christmas.
I’m interested to see what people say in this topic.

I don’t have a Rocketbook, but I have the similar Elfinbook, and I had the same thoughts about whether it’s useful or just a fad. Strangely though, I’ve found it really useful for adventure design.

When coming up with a series of encounters for my ICRPG game, I just wrote down any wild ideas that came to mind, drew out some quick visual reminders, then left them. Next time i picked it up i’d had more thoughts and some clarity on previous ideas, so rather than rewrite, i could just wipe out the irrelevant stuff and add in more focus and additional bits. Coloured pens helped. Repeat with each encounter with a heading, some ideas, and a two pages spread for room, and it soon developed into something more and each bit evolved over time.

I found that being able to tweak previous ideas without starting again was really useful, and actually writing/drawing was definitely better for inspiration and retention of ideas.

Then of course being able to PDF them, and move the pages around for better flow, gave me a ready reference for quick adventure points, as well as building into a campaign.

So, it depends on your style of creation, but I found the write and erase type book really handy 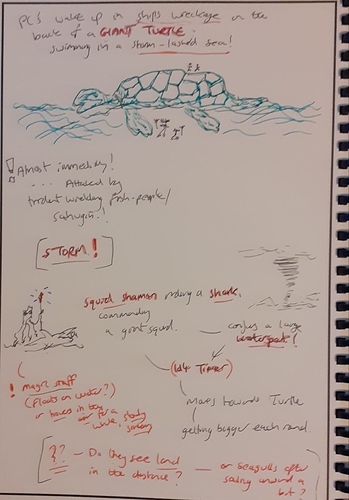 I have a Rocketbook and a set of beacons and honestly, their usefulness comes and goes, depending on my workflow.

I find that the rocket book is a really nice size and being thin, makes it really easy to pack and take with me wherever I go. I normally keep it in my laptop bag and it fits perfectly. But that kind of highlights why I dont always use it. **The Rocketbook works best when part of a digital workflow, IMO. **

Sometimes I’m on my computer all the time and the rocketbook facilitates the process of getting my notes digested onto my computer. Other times, not so much.

I use mine everyday. Just gotta make sure the ink dries before turning the page or closing it!
It’s good doing any writing like stats etc and thumbnail sketches. I think I prefer sketching in a cheap sketchpad for designing rooms and characters etc.Great for lectures and talks… Like watching Key Mechanics.
I love the fact it can send straight to Drive/Dropbox and do OCR. I think it’s already paid for itself in rent space and notebook buying. 4 stars.

I find my Rocketbook to be great for in-game note taking that doesn’t need to persist. I can track enemy HP during combat, rando NPC names that won’t come up again, etc. without feeling like I’m wasting a piece of paper.

I don’t scan my pages often, but it’s nice to have a workflow built into the app that sends the scans somewhere other than just my photo roll, to be lost forever with all the pictures of my dog, or that beautiful sunset, or that funny license plate, or that tree that looks angry…

Appreciate all the feedback and ideas, y’all.

I bought a few colored frixion pens and highlighters and have been fiddling with it some.

I like the way it bundles into a pdf basically assembling a bunch of the blank sides of index cards into a tidy file.

I think there’s definitely room for this in my world, especially with so much desire building to go more Theater of the Mind for a bit.

I’m converting one of my old Ghost Mountain one shots into this format as a theory-to-practice. More as things develop.

I tried but mine got so smudged (marked by the afterimages of erased writing) that it was not really as good as I wanted it to be. Their printable sheet works wonders for scanning drawn maps into VTTs though

I had one, and it was definitely a novel concept. Never used it more than twice, though, because the writing and uploading took longer than just opening a document and typing it myself. Maybe if I actually wanted to sketch with it…