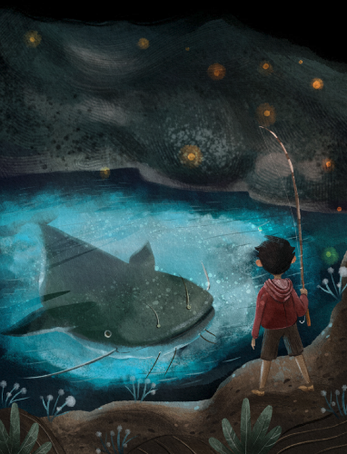 Just started reading Rod Reel & Fist and I have thoughts. (Itch.io; bought in this bundle)

Differences to ICRPG (and other games) The dice system is simple. Roll 1 to 4 d6, if any are over the TN, you succeed. HOWEVER, the TN of every task is adjusted by your Stress and Exhaustion. 3 points of either make trivial tasks impossible without rolling doubles (doubles add together). This leads to an interesting dynamic where the danger of an encounter isn’t being killed, it’s being so tired you fail at everything until you make camp for the day. I don’t think this fits the default ICRPG style, but exchanging HP for more difficult rolls could be a way to move the stakes of an adventure or campaign away from personal peril to community peril. If the heroes tire out too fast, they won’t complete their quest in time to save their home.

Similarities to ICRPG - The game is loot based. Characters are defined by their type (class), temperament (fishing/fighting style), and starting gear (LOOT). Food is the main way to heal, and most characters are helpless without their rod and tacklebox. The only way to improve is to be rewarded loot or secret techniques by catching fish or defeating monsters. (My favorites are the solefish, which can be used to make athletic shoes, and a cassowary that teaches martial arts to anyone that defeats it in single combat).

Other Thoughts The game has a lot of noodly bits in the rules, like rules for classes in weird corner cases (what happens if you have four cooks in the party?) and the fishing/fighting needing a flowchart to resolve. On the other hand the game is funny and extremely generous. I might have more to say on this in one or two days.