Theater of the Mind (TotM) is great but a frequent con of it noted by players is the difficulty of keeping track of spacial tactics if playing a game that uses them. Even with using verbage of CLOSE/NEAR/FAR being mutually understood, players can struggle to remember who’s where without a map and often ask the GM to repeat what’s what.

A number of games such as FATE and Tiny D6 include diagrams to place tokens or minis on to represent spacial awareness while playing TotM. I’ve been wanting to adopt that as simply as possible to Roll20 when running TotM with ICRPG. Here’s a simple stab at it by drawing shapes on the page off to the side of whatever image is on the board for flavor/immersion. 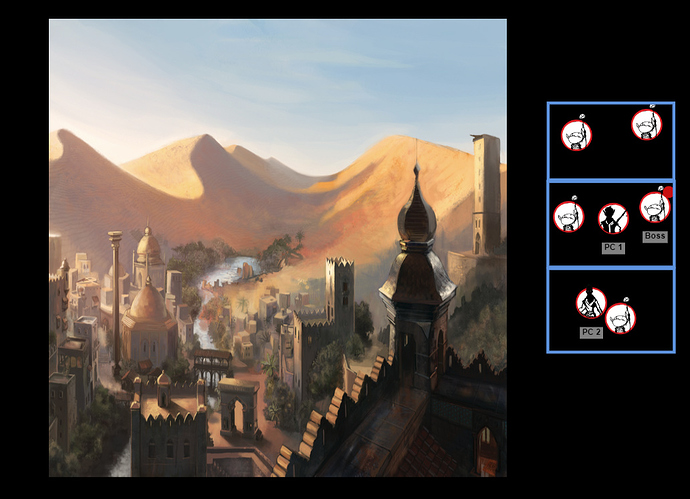 A big reason I want to have this is because I set up my games for PCs and Monsters to be rolled for from their tokens using Macros (saving much time compared to returning to the dice roller or bringing up a sheet repeatedly). So when running ICRPG TotM I have tokens on the board. Now, adding this “Range Bar”, the box a token is in represents CLOSE, the next box is “NEAR” and the second box from me is FAR. PCs and Monster tokens can be slid up and down accordingly, and I’ve made the boxes large enough to hold a handful of tokens should I be running many things at once.

I can also extend the bar by a couple squares if I want to run a large room having representation of “Flanking” from two sides where the center square represents the center of the room. This allows for more tactics.

Who might benefit from this? GMs running TotM on Roll20 where spacial tactics matter and who don’t want to muddle up the game clarifying positioning over and over again. Also, those who want tokens on the Roll20 board to roll from via being assigned to character sheets.

This is a really great idea and I can see that it would certainly help clarify distances in combat situations. Thanks for sharing this example!

That’s a good idea, thanks for sharing .

Ran my first ever roll20 game last night and it was great, this is exactly the kind of thing I would use. As a thought on how you could make it more evocative you could:

The final fantasy one is specifically something I have thought about doing… Roll 20 would be the perfect place to test it out.

Update: Here is a quick mock up idea for personal games.

Credit to Dyson for the scroll (https://dysonlogos.blog/) which I of course used with out permission (though I believe he has released as a free asset, I will take these down if it is an issue).

For the variant card, I just thought it would be fun to add some flavor text and an extra “far” zone. Of course it is still meant to be all relative anyway.

Agreed. My thoughts were to get a more aesthetically pleasing graphic and save it as a token into Roll20 to call upon as needed.

But in liue of that, simply drawing the boxes with the tool bar shapes feature in Roll20 takes me about 5 seconds and adds the flexibility of adjusting the number of boxes for whatever the situation may call for.

I’ll keep an eye out for a good graphic though and turn it into a token unless someone artsy here wants to draw on up.