Question: Which piece of armor is hit?

I understand the concept of hitting and destroying armor. But I can’t find the rules, in which order the different pieces are hit. Does the attacker choose which pieces are hit? Then the GM should always go for the most useful items first. Does the defender choose which pieces are hit in which order? Then I’d try do spread the damage among multiple armor pieces so none gets destroyed to quickly. Is it at random? I can’t find it in the rules. Any help is apreciated.

When players are doing the hitting, I generally let them choose what armor they hit.

When players are getting hit, I generally let them choose how to defend with their armor.

I guess I’ll rule it like this:
first hit is random. Then the enemy will always attack the damaged pieces first. If it is destroyed, random again. Randomness is a cool pattern here.

Pg 24 of the PDF notes this about hits. 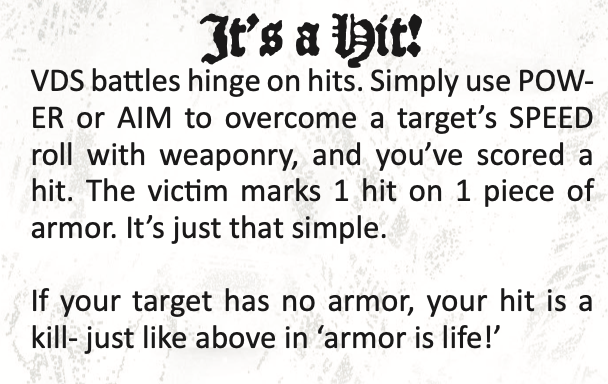 To me, that leaves things open. If you want to specify the order, go for it. If you let players choose how they distribute damage, awesome! You can always make things more difficult if players are trying to aim for one specific piece of armor. The flexibility is there for whatever you’d like

On page 48, in the GEAR section, under the armor heading it says “The best piece of armor takes a beating first”.

I think I like your idea better, so when I get a chance to run this game that’s probably how I’ll do it. Maybe even change it up, like smart enemies go for the best piece, dumb ones hit randomly every time.

“The best piece of armor takes a beating first”.

I don’t hold to this, because it doesn’t always make narrative sense. If the player’s best piece of armor is a pair of boots, and they’re being shot at by Borgs, I don’t see them using their feet to defend.

I get it there’s always a little suspension of disbelief: if their only armor is boots then how do those boots take hits when being shot?

Players also have ideas about how they might use any piece of armor later, and might elect to sacrifice one piece in order to preserve another. As such, my preference is to let the players choose how their armor gets whittle down, and allow them to describe their defensive moves to explain it in the fiction.

Yeah, I think letting the player choose how to use their armor is a cool way to run it. I also think random targeting would be fun, so I’d probably use both at the table. Maybe a super-smart enemy would actually target a particular piece, and that actually adds drama and danger to those enemies if players are used to blocking as they see fit.

I’ve been struggling with the narration as well and it hit me: armor is just a way to push the “metal” (often literally) tone of the game, that of heavy, brutal combat. To me, as armor is destroyed it doesn’t just fall off, it’s breached or damaged enough to impede you by hanging poorly. As it “goes away”, you are in fact dodging and rolling and such and when it’s “gone” the next hit kills you. So, those iron boots aren’t necessarily being shot at and hit, it’s just that things are eventually so desperate you become vulnerable.

It’s 0430 in the morning so I may not be explaining myself well, so please feel free to chime in and poke holes so I can refine it.