This the beauty of chunks is they can = 5 hp in one session and 10 in another. It’s all very flexible. @Lon by adding Blocks…expands the concept.

You can go, hearts, chunks, blocks, modules, systems…with the DeathStar being a system. Or shrink it all down, to a modern battle tank being a system. And each layer is x2 of the previous. All depending on the scales you are trying to interplay.

In essence I totally agree with @Lon it needs expansion, my only point of contention is completely vs granularity. And then simplify what you have and add a layer of gameifying it without making it silly, like a lone pilot having to make a one in a million shot when all that is needed is a large ship to go into hyperspace through the deathstar in order to destroy it…sorry went off topic.

I don’t disagree that setting can make a big difference.

For me and the reason I didn’t use the Death Star as an example is that it’s essentially an invulnerable thing with a single specific weakness.

We are in total agreement. We are arguing semantics really. You are scaling it from the PC heart system, I’m looking at it from the center of gravity point of view and trying to keep the mechanics as stream lined as possible.

Your OP is in essence allowing for different games Or levels to interplay. I’m going for the scale playing in the same game.

Also as I get less personal to the characters it becomes a strategy/war/influence game and not about the individuals.

But, you are totally spot on and this is an aspect that should be explored and expounded on. How do I scale a Voltron game?

In this case, chunks equal 10 hearts but Blocks is only 5 chunks.

That hilarious, I was thinking of and was going to provide a specific voltron reference but didn’t and went with the spaceships

Effectively, you have this as a framework:

-average tasks that are either difficult or time consuming, but rarely both

-similarly, there’s times I would consider a well armored or especially powerful Mook Mob to be a 5 point Chunk as well

-A Very difficult, very time consuming problem to solve or chest to open for the average human

-2 average humans and a Mob, or 2 Mobs and an average Human

-(Here’s where I start adding in:) single 5 point Bloc, like in the examples in very top post

-one average dude just ain’t gonna solve this problem, unless mayyyyybe if they have Days to Years to work on it. Or if they figure out the secret weakness. Or assemble the right tools and allies (and plenty of ‘em!). But even then… probably gonna be tough.

Incidentally, this talk isolating to just the Effort needed to overcome a problem highlights how elegant the balance is with which Effort dice you get to roll. And even more crucial: the same amount of effort distributed across more foes means they get actions against PCs. Ditto if you give a single foe more than one action, it really matters as to how dangerous an encounter can be regardless of number of HP! And don’t get me started on the Timer/Effort relationship! Man this game is so frickin deep and cool!

It occurs to me, looking at that list, that a mathy person could probably figure out the “click” economy conversion factor of actions to Effort…

I don’t understand what you mean by click economy. I haven’t heard the term before

This line of logic is based on the “click economy” (or “action economy”), a concept we inherited from Netrunner that you can read more about in this excellent article. The basic idea is that since you can spend one action (a “click”) to draw a card or gain a resource, you can evaluate the value of effects based on this simple conversion rate. For example, Rabbit’s Foot costs 1 action, 1 resource, and 1 card to get onto the table (a total of 3 “actions’ worth” of resources), you must draw at least 4 cards (4 “actions’ worth”) before you’ve gotten a net positive effect.

This theory is a helpful way for new players to get their bearings on what makes a card good or bad, but just like in Netrunner it shouldn’t be used as a hard and fast rule. To quote unitled’s article (which goes far deeper into this specific topic), “ not all actions are created equal

ETA: here’s an article on click/action economy in Pathfinder RPG. that probably explains a little better in terms of what I was getting at. (Scroll down to below the “Judge” quote.)

this is nothing i would like my players or myself thanking about during an RPG session. if you are thinking about that. you are betting off playing a boardgame/wargame in my opinion.

@Abodi I don’t think about click economy overtly during play, but I do like blurring the lines when I’m getting philosophical.

About half my table are Gamists and half Narrativists, and all of them also do play boardgames with… so I know I need to make sure I give the half that are lil minmax strategy commandos a challenge. In prep, I often plan to alternate crunchier, gamier phases with more RP and Plotty, Improv-y focused segments in between.

In actual play, It’s a bit like when I was playing poker: you watch the table more than you watch the cards. I keep alert for tells and make sure no one feels safe or in control unless it’s a GM-approved respite or a fight intended to get them up an emotional peak (so I can have them plummet from it later).

After Target Difficulty and Timers, Keeping them on their toes (and making sure Threats are actually threatening) is a constantly in motion balance of 3 or 4 things for me: number of foes (but really this means ratio of total enemy actions to total PC actions), how often the foe is able to hit the PCs (ie their Stat Bonus), how bad each hit hurts (damage, debuffs, etc.), and of course how long it’s going to take to kill this thing (defenses and HP).

That may sound like a lot of engineering, but really I don’t have to consciously think about this much anymore. I make sure each of those traits is represented strong or cranked up by Timers in one or more of the foes and environmental hazards when I prep, then in play I use the prep as a kind of “menu” for feeding the PCs trouble and the Players stress.

As an example, here’s the Gamier space battle segment for an upcoming game, intended to be a climactic finale… Since it’s the end and I want to orchestrate big emotional payoffs, I plan more than usual, to make sure I reflect what’s come before and have some big surprises and thorny new challenges at the table.

(Spoiler alert: uses Death on Krell as the jumping off point I riff from) 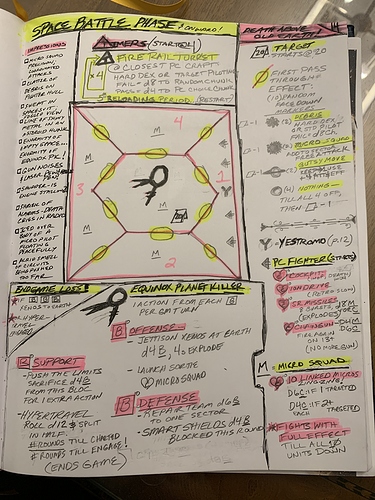 image.jpg3024x4032 2.78 MB
@Paxx at the bottom there’s my quick and dirty Bloc style Gigundous Mega Starship. I don’t expect them to do much to it from the outside, so that made it easy to build.

In case not clear, with this one the way I am getting panic right at the start is that 20 difficulty, which they have to be flying all over the sectors to eventually drop down to 13.

Hi @Lon, can you summarize your system simply please? I am quite interested but don’t totally get it.

We default to Hearts at the Human Scale.

The next level up is Chunks, which make up Gigantic Beasts and Powerful Technologies. Vehicles, Kaiju, Town Features, etc. These can be really problematic to fight, but when the Chunk is on your side, it can be a game changer.

A Bloc (as in the old Soviet Bloc) would make up the top Order of Magnitude, rising far above the Mundane to represent Dieties, Galactic Senates, Big Evil Corporations, Secretive Conspiracies, Espionage Agencies, Kingdoms, Roman Empires, Global Pandemics, Strategic Alliances, Religions, Mass Movements, Aircraft Carriers, Skyscrapers, Factories, etc. The most powerful servants and the cruelest masters… the most difficult for a single human being to have any kind of direct effect upon.

A Bloc has 5 or 10 points and when it is “attacking” or doing anything really, its effort rolls are scaled:

If Individual Soldiers are at the Heart level, and Tanks and Planes are made of Chunks, then the entire Army is made of Blocs.