Mehrfin’s attack misses the Necromancer Priest, as does Hykon’s attack on the Storm Priest.

Quildrum, rallied by the sight of brave Muel’s tabard, lands several devastating blows against the Necromancer Priest, almost killing him.

Muel hits the statue, where the mass of tentacles are carved.

Morvi runs up to the Storm Priest and beheads him in a single blow, and the words of a spell die on his lips.

Arcane energy from the dead Storm Priest swims through the air and into the Child of Azatoth.

The Child’s hand seems to gesture without moving and Quildrum is instantly teleported into the labyrinth of rock in the northern quadrant of the battlefield. [@Condorthegreat, decide how you’re gonna escape, this labyrinth blocks line of sight and you can’t just walk out without some effort].

The Sea Priest outstretches his arms and bellows “You will all be drowned!” With that summons a huge wave that crashes onto the eastern quadrant. All of you make an STR save or be washed into the sea. [If you’re washed in you’ll take drowning damage next turn if you fail to swim out].

The Necromancer Priest grins evilly and moves to the south quadrant, as he does so he speaks in the terrible speech of undeath. Tendrils of energy reach into some of the dead captives and four of them rise to their feet weilding swords and clubs.

Finally the Priestess of Ruin springs away into the sharp rocks to the western quadrant. “You should not have come here, Tornton” she warns Mehrfin. Thrusting her arms out towards him she bends and twists her fingers as though breaking something. Mehrfin must select one equipped item at random, it does not work now until the timer hits zero.

Mehrfin watches as the priestess of Ruin calls him a Tornton. Is that some kind of insult? He wonders.

He whips his head around to look at his pack. “What the …?” He begins to say, but doesn’t finish his phrase because he’s swept out to sea by a massive wave.

Unable to gain purchase on the flowing watered ground. He casts doorway from his ring and instinctively finds himself on the last place of safety: the boat they had arrived here in. In addition to being tossed about by the movement of the water, the boat is also rapidly filling with water from the open portal.

[I’ll be relaying Quil’s turn for him. More phone issues. Waiting for him to let me know his turn.]

As Hykon readies another bow shot, at the Child of Azatoth, a deafening roar fills his ears.

“What now?” he wonders, as he turns to see a giant wave breaking the shore.

Hykon quickly scrambles up a rocky outcropping and manages to press himself inside a shallow cleft in the rocks. The wave crashes around him. Although soaked, battered, and now irritated, he is no worse for wear.

With a cry and plea to his deity, Hykon steps out from the cleft and takes aim at the central eye of the Child of Azatoth.

As Hykon lets an arrow fly, his feet are caught up in debris, stirred up by the wave, and he stumbles. The arrow flies wide, missing its mark, once again.

“Aaaarrgh!” Hykon cries out, half in anger and half in bewilderment.

[Just thinking out loud… Instead of KARMA POINTS, maybe call em HERO POINTS? Since they lead to gaining a HERO COIN? Think I’m gonna introduce this idea to the games I GM. The Karma/Hero Point thing.]

Tornton. Is that some kind of insult? He wonders.

[Hell yes. Very thematic. Also could help players remember to tally them on each miss if they have similar naming conventions. I’m always looking for an advantage though so I’ll remember Karma points just fine🤣.]

[Hey, Quil wants to know if the sides of the labyrinth wall are scaleable? And/or, what you mean about he can’t just walk out without EFFORT?]

[Quildrum can certainly try to climb out. When he takes his turn he can basically post two turns, instead of waiting. Its my fault things have been held up. It’ll take 1 Heart of effort to climb over the rocks and escape.]

The Priestess of Ruin spits a curse and draws up energy from the ritual circle. “Don’t speak to me! You are fools to stand against our master”. Again she reaches out and grips her hand into a fist, and speaking her hex magic. [Muel must randomly select one item of equipped loot which is temporarily ruined until the timer goes off]

The Child’s lesser eye cluster seems to shudder and lightning cracks down from the sky targeting those still stood in the eastern quadrant [Muel, Morvi and Hykon must pass HARD Defence saves or take 1 damage].

The Death Priest, completely bald and painfully thin, makes a sucking noise and draws the life essence from Morvi [Defence save or suffer 2 damage, which he’ll use to heal himself].

[Good god, have I been misspelling Torton this whole time!

You guys only mention it now! You’d all let me walk around with toilet paper on my shoe wouldn’t you! You gits

[Don’t worry on the misspelling. I was waiting for it to come from an NPC. It worked out perfectly.

Mehrfin looks over and sees the brutally beaten necromancer sucking the life out of his people … not dying.

He fires off a modified doorway spell as a glaive like spiral (what he tried to do earlier) trying to chop that loser in half, and suck half his body back into the spider and zombie forest.

[Got a 4 on a d6, #4/6 on his equipment list: Muel’s CLIMBING GEAR bag is full of sand and seawater and some sea urchins. He’ll need a quiet moment to carefully remove them in order to use the gear again]

Morvi looks on in horror as the Sea Priest transforms in front of her and, terrified, she barely ducks under the claw attack (DEF 11+5=16, whew!) and then shrieks as she feels a spot in her back grow deathly cold. She twists away (DEF 19+5=24) and screams again as the Death Priest tries to drain her.

[“Death Priests sense my power and they seek the life essence. I do not avoid Death Priests, Muel. But I do deny them my essence.”]

As Morvi strikes a pose (and makes unlikely pop culture references) Muel battles the recently nostalgic for life (DEF 5+5=10, Muel is at 4/10❤️, 3/5 Karma) and loses his footing in bat guano, taking further damage to his ego.

["that is why I drink only distilled water, or rainwater, and only pure-grain alcohol, Morvi! (DIE ZOMBIES!) We must protect our Vital Fluids!"

Muel lashes out with his spear again, using the halberd topped pole to try and decapitate the poor Zombie bastards swarming him (STR 12+3=15, 2 WEAPONS EFFORT) and Morvi will attack the Necromancer Priest (Death Priest?) again (?) (STR 5+2=7, 2 effort just in case). 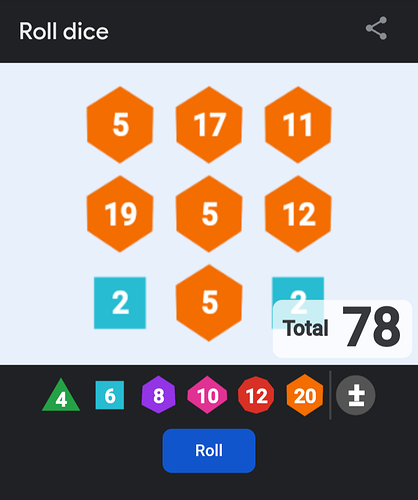 [All my dice are packed away because I’m moving, so I’m using the ol Google for now. It’s so handy, but it’s just not the same!]
[Also, my mobile data is misbehaving, I’m not able to use it reliably for some reason, and I disconnected my internet today, so just a heads up]

[Yeah … I stopped using the browser rollers because they didn’t seem all that random to me. When I first rolled on them I would almost always get Nat 20’s, or at least really high rolls, and then following that the next ones would be low. This was way too predictable. Dice make you feel as if it is truly random, though I guess even dice have their biases.

[I just found my dice and rerolled my turns **and** got the exact results (but with _slightly_ different numbers) and one Nat1. One EFFORT was +3 instead of +2. Probability is too weird man.]

[I hate getting ass-blasted by the dice but getting boned by Google sucks even more to be sure​:triumph:

Ok, so Quil’s next two turns: he’ll try scaling the wall. He has no rope or anything, so its gonna be spiderman style.